The Minuteman » Unfiled » Thunder on the Snake–Day 2

While laying fast asleep in my tent suddenly something jostles me awake demanding my undivided attention.  I listen and all the sudden I hear what sounds like rain pouring down on the tent.  I think to myself, “Interesting, there wasn’t any rain in the forecast.”  Then as quickly as the downpour started it stops.  Now I’m confused, wondering why a down pour would start and end so quickly out here.  Then the downpour begins again and the realization sets in, that’s no downpour, that’s a sprinkler.

I dive out of bed and spend the next 15 minutes keeping the sprinkler from hitting the tent anymore and finally the sprinkler recedes.  I won the battle, but I didn’t realize I was about to completely loose the war.  A second set turned on, one of which came up between the rainfly and the tent.  At this point I call it hopeless and tell the wife what’s going on.  The solution is to pack up and head out.  That’s exactly what we do.  At 0200 we start packing up all of our equipment back into our rig. We get everything broken down by about 0230 at which point we face a new decision.  Head home and sleep in our bed, or go to the marina and sleep in the parking lot.  The bed would be comfortable, however we’d be liable to wake up late and not make it to the marina by 0700 when we have to be there.  We opt for the parking lot, our scheduled wake up time is only 3 hours out anyway, and it would take us 45 minutes to get home.  We arrive at the marina parking lot at about 0300 and proceed to make the best out of our makeshift accommodations.

At 0530 my phone alarm goes off, I turn it off and then look in the rear-view mirror.  I am greeted with the most wonderful situation at 0530 in the morning, a police cruiser parked behind me with an officer getting out to approach the vehicle.  The only thing I can think at this point is, “It’s too fucking early to deal with this shit.”  Cop comes up and asks what we’re doing in the parking lot.  We explain that the artificial rain system wrecked our camping accommodations and that we’re part of the safety boat crews for the races.  At this point I’m sure I looked less than thrilled because I was tired, annoyed, and ticked at the way the day was going.  He asks for our licenses, being so early, not in a threeper mood, and this not being an instance to start a battle over “stop an identify” we just hand them over.  I was screwed no matter what technically since I was in the drivers seat with a key in the ignition.  The wife I could have made a stink over since she was just sleeping in the passenger seat.  I am a chess man and understand the value of making sure to pick and choose your battles, this was NOT one of those times to start a battle.

He comes back a minute later, apologizing for waking us up, I say no problem and thank him.  Then the wife blurts out, “Oh, you’re carrying a Glock.”  In my head I’m going, “Oh shit, be cool, please be fucking cool.”  Since my gun was on my hip and I could be reasonably sure he’d be cool, but it was urban, not rural Idaho.  He responded with the standard info at which point she goes, “Barron’s more of an XD guy.”  Evidently he’s not a big Springfield fan, I follow up, “Glock doesn’t naturally point for me, natural aim puts rounds high.”  To which the wife then goes, “He prefers his 1911 though.”  At which point we had a three way praise session for the wonders of John Moses Browning.  He then asks, “So you all have your CPL’s right.”  My response, “Yup, woke my ass up morning for my 21st birthday to file for it.”  He chuckled, said good bye and told us to catch some sleep before the races. 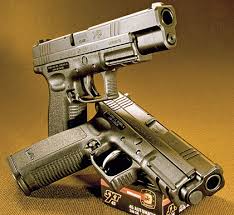 After the 0700 crew meeting we all went to our respective boats.  My boat had been in the shop the night before due to a fuel line issue.  The boat finally arrived onsite at 0815.  I climbed in the boat while it was still on the trailer and started hooking up my radio gear.  By 0830 we were headed back up Hells Canyon.  Just north of Asotin though we found a pleasure craft stuck on a sandbar.  There was a US Forest Service boat next to us.  I radioed in that there was a pleasure craft aground on the course.  Due to time and safety concerns they needed to be removed.  The US Forest Service boat didn’t do it, we did. I wish the guy who was part of a camera crew headed upstream with us had filmed it.  We pulled them back down to the Asotin boat launch and put them ashore. Now with how far behind we are we start flying up the river.  Along the way I hear across the radios a boat being sent to Heller Bar to ferry someone to the finish line of the first leg.  I promptly radio in to tell the other boat to stay on station and Boat 15 will take care of it.  Then there was a large amount of traffic regarding where the race official was, and his ETA.  We arrived at Heller bar at about 0930.  Our captain gave a drop dead time of 0955.  When that time rolled around, I radioed in that he can swim up stream, we can NOT wait any longer.  Boat 15 then headed to its position at the top of upper wild goose.  Not even 10 minutes later the first boat went screaming past.

Our radio communications was interesting.  The person at the start finish didn’t have a solid shot into Heller Bar anymore.  I could hear the start/finish just fine,  start finish could hear Heller bar just fine, Heller bar could hear me just fine, I couldn’t hear Heller bar.  If you’re confused, don’t worry it took the three of us about 2 minutes to figure out how the relay was going to have to work.  I was a center patch between the start finish and Heller bar.  I got some pictures but after a while I could no longer take pictures because there was a problem.  We had a start order for the boats, but one hadn’t gone by and all the boats after it were.  Where was boat 171?  Once the last boat of the start order had gone by, boats #5 and #7 began the search.  We dropped off our passenger and then heard a call across from Net Control.  171 was found and limping to Heller Bar.  They had tools on the way, and there was also an antenna that needed to be transported for the operator upstream from me.  Back to Heller bar we went.  Along the way we met up with the sweep boat that was clearing the river and took over the role. At Heller bar we were greeted by a boat that had wrecked up on the Salmon and was being towed back for recovery.  It was taking 3 crash pumps to keep it afloat.

Boat 171 was waiting at Heller bar for their tools, but they needed to get up river to make the next race.  We told them to go and would bring the tools if they got there in time.  About 10 minutes later we had the tools and antenna on board.  Away we went headed back up river to finish the sweep and make the necessary deliveries.  We delivered the tools and antenna to set up shop again about about 5 minutes before the first boat left the start line.  We moved to the opposite side of the river which gave us much better reception and transmission.  Communications were normal for me to Heller Bar.  We still couldn’t hit the repeater though.

All was quite and uneventful on the down hill run.  Sadly our waiting for the tools was for naught.  Boat 171 was a no start and limped down the course after the last boat had started.  At this point we put up flags and began our sweep back down river.

Other than the minor glitch from net control regarding the pick up of the start/finish line boats all went well.  That glitch was compounded since in the quick teardown the radio operator buried his HT.  Luckily the boat was directly in front of us so the confusion could be cleared immediately.  We got back to the dock, packed up our equipment and headed to the awards show.

That nice dent to his hull was from the pressure wave from the water.  But don’t miss what it did to the welds up top.  He made a matching indent on the other side as well.

After getting a poster signed by most of the drivers I could find a dust storm rolled in and the wife and I decided to call it quits.  We were sleep deprived, needed to unload the rig, and I had to work in the morning.  I said bye to the hams and headed out.

The overall lessons are this:

With that I’m out.  If you’re a racer or someone I met during the event, feel free to drop me a line.

2 Responses to Thunder on the Snake–Day 2