AGirl posted a picture on Facebook that looked like a Cleopatra costume that one would see in Frat row during Halloween, so I thought I would do a search for shits and giggles.

On Wednesday, February 22nd I showed up to the Palouse Hills Amateur Radio club meeting early.  I was there to take the extra class exam for a 3rd time.  Man is that test a bitch.  I finish the test in about a half hours time then anxiously awaited the grading process.  After a few minutes one of the VE’s grading my exam gave me a thumb’s up.  I immediately yelled “WoHoo!”  That got everyone’s attention.  I passed.  I FINALLY passed the damn exam!  I am proud to say I am a newly minted Extra Class amateur radio operator.  The next step is applying for my vanity call sign followed by a new license plate for my Earthf*cker Lite.  The husband can “Now Shut The Fuck Up”. Today I finally bit the bullet and cut my hair.  It was a big change for  me,
but my head already feels better.

Here are the before photos: 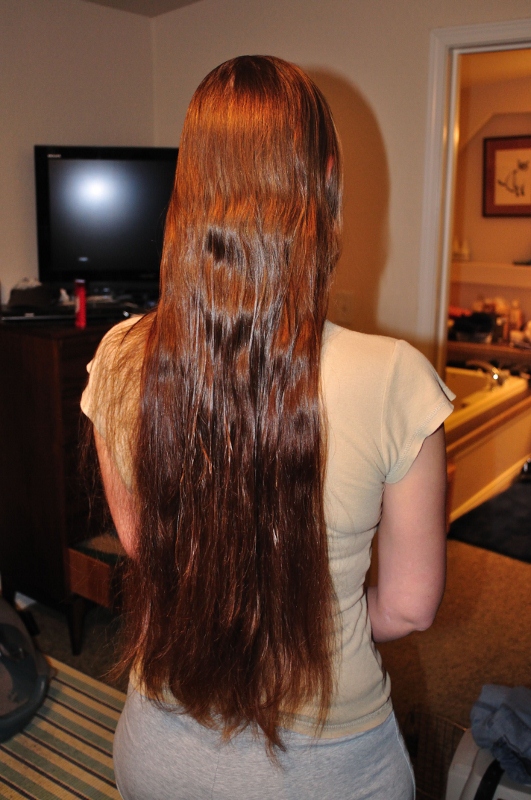 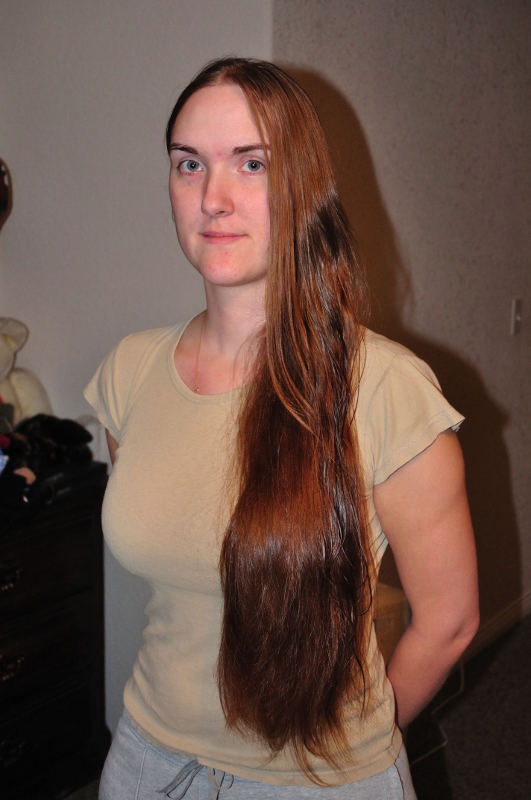 I donated nearly 2 feet to Locks of
Love: 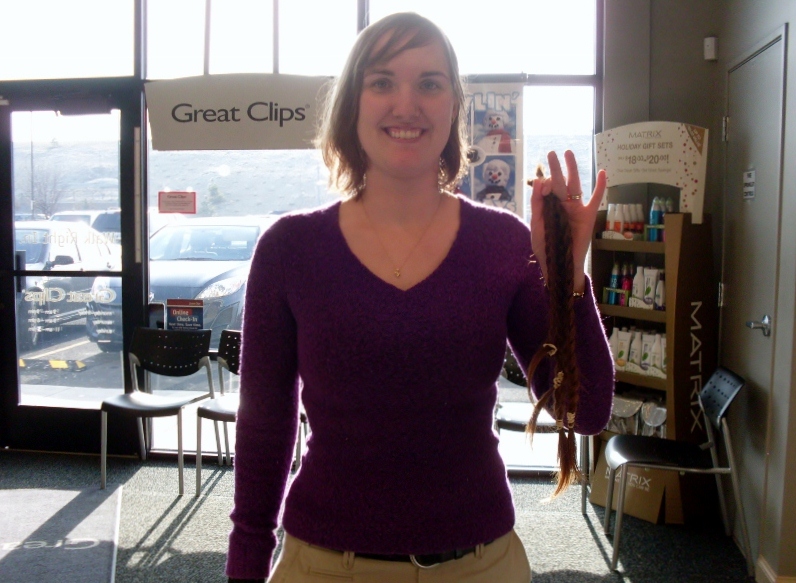 Now, the official after photo: 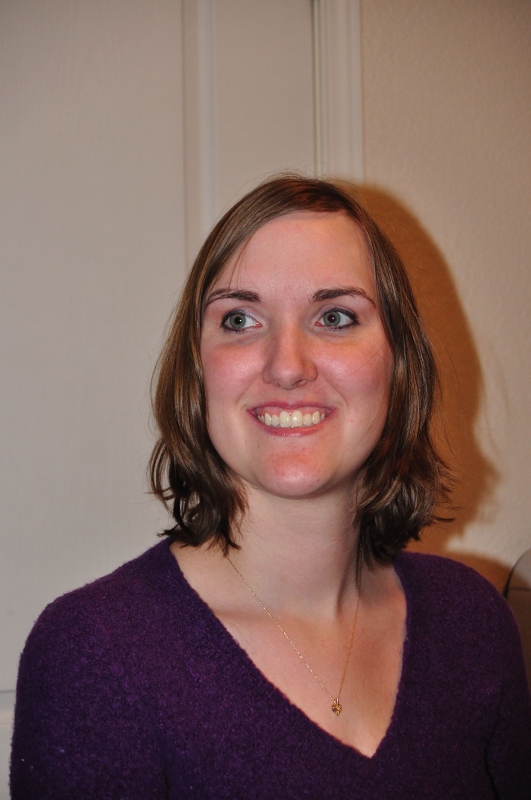 Great Clips is awesome.  Not only did I get a good hair cut, but it was free since I donated my hair!

Apparently, people now, in the US, have the ability to screen their future offspring In vitro and choose which embryo to keep and which to “discard”.  Not only can gender be selected, but genetic diseases can be tested for and culled out by not choosing the vulnerable embryos.

DNA analysis of human embryos are also currently used to
determine vulnerability to illnesses such as Down syndrome, hemophilia,
kidney disease and cystic fibrosis, according to Kisken.

People seem to want this ability without realizing the consequences of their own actions.  When I read the article, a particular movie came to mind.  Gattaca, despite being science-fiction, is scary on the basis that it is indeed plausible.  Steps are being taken to lead us in that direction.  It is getting harder and harder to have a natural birth in hospitals.  Doctors feel it is safer for a woman to give birth via Cesarean section (though i think they are just thinking about their pocketbooks).  Pretty soon, it this keeps up, women will not be able to have a natural conception, let alone a natural birth if they so please.  With the government spreading its grimy little fingers into every facet of our daily lives, it would not surprise me if the new healthcare will start to require In vitro fertilization and screening.  To “ease” the requirements of the public health system.  Next thing you know, you won’t be able to exchange any bodily fluids without a permit to do so.  As one will have to be screened as fit for reproduction.

Just as in Gattaca, embryos will be screened for genetic superiority and if a child is conceived and born by natural means, that child will be classified inferior, provided the pregnancy is even allowed to go to term.  What better way to induce someone into wanting to get an abortion if there is no way to obtain health insurance for their child.  The only way to make it anywhere in life will be through registration as a genetically superior being.

Stop playing God, all it does is allow discrimination of the “lesser beings”.

Not only did this take place in California, but at a High school no less, so of course it can’t happen here, a school is a gun free zone.  The school went on lock down after a murder-suicide took place in the parking lot.

“I heard the shots and I knew someone was dead,” Chad said. “Why would
he do this at a school? And why did he have to do it where there are
kids everywhere?”

Just because it is a school with kids present does not mean that someone with intent will be thinking about the logistics involved.  The person is not going to care due to a one track mind.

“This just makes you think it could happen anywhere,” she said.

Thanks captain obvious, welcome to the party.  Why do you think this series is named like it is!?

I’m a bit behind on this, but I haven’t forgotten about it.  Beale Street in Memphis, TN decided that it is going to ban guns on the entire street after restaurant carry was passed.  So based on that, nothing should happen right?  Cause guns are banned.  Well, tell that to the 6 people injured from a shooting in none other than the Beale Street district.

Later this month, Beale Street will break out the hand-held metal
detectors at the entrance points and use other security measures to keep
guns out of the three-block area day and night.

Based on the fact that there are metal detectors, how did someone get through with a gun?  Honestly, the detectors are just another form of security theater.

No matter what type of safe guards are in place, if a criminal wants to do something, laws are not going to stop them.

But, but, it can’t happen here, we have metal detectors to keep us safe.

Since JayG started it
and I actually have a story to tell, here goes nothing.

So here’s the meme. Long answers or short.
1. What was your first car?
Model, year, color, condition?
2. What adventures did you have in it, good or
bad?
3. What happened to it, what’s the end of the story?

My first car, bought from my cousin by my parents, was a 2002 Hyundai Accent
much like what is pictured here.

It was stick shift and the low profile model.  It also was the bare minimum
on any extras as in no cruise control.  My parents bought it for me after I
moved into an apartment from the dorms.  Since I had previously lived on campus, I didn’t need
a car and my parents said they didn’t want me driving home every weekend.  I
didn’t have a car in high school, didn’t need one and I didn’t get my license
till after I graduated, I didn’t have a use for it.  At the time, I felt school
was more important than driving.

My first urban driving experience with this car was in Seattle.  I was driving up
James St., which happens to be very steep, and had to stop in the middle of the
hill for a red light.  As I was still fairly new at driving a stick I conked the
engine when the light turned green.  After that, I quickly learned how to play
the clutch on hills which came in handy for the WSU campus.  If need be, I could
easily let it roll more than normal to warn other drivers that were on my tail.

That car was a good little car.  That is, until it became known as the coffin
on wheels.  A car that small up against a fuel tanker carrying 11,000 gallons of
fuel, head on, is not a fair fight.  The car, to say the least, did not
survive.

*Notes below are from Barron, I do not remember the accident or 5 days after the accident.  My condition was the same as Drew Barrymore’s character in 50 First Dates.* Pictures below could be considered by some to be of a graphic nature. Click read more for pictures.

I [Barron] was driving at the time of the accident.  My legs actually came out from under the steering wheel and I was laying at about a 45 degree angle with my legs laying against the dash.  After regaining consiousness and taking care of other issues *discussed in a minute* I set the compound fracture in my left leg.  It was bent about 75-80 degrees, with my foot turned in about 60-70 degrees as well. I won’t describe how I did it, a guy outside the car was disturbed by my actions.  I splinted and wedged it in place on the dash board until the cavalry arrived.

The cavalry had to peel the car open in order to pull me out.  That is quite seriously the most pain I have ever felt in my life.  My right femur was broken right at the Lesser Trochanter.  At the time we actually thought I had broken my pelvis.  That combined with the damage to my left leg, it was excruciatingly painful as they pulled me onto the back board because they basically had to drag my legs over the non-smooth interior.  When they finally got my leg in traction in the hospital it was the most refreshing feeling in the world.  Seriously it ranked right up there with sex just because of how fast it went from pain, to no pain.  It was like flipping a switch.  Which was also the switch were I finally checked out, as they did that, they also started an IV and giving me pain meds.  I have seen my signature on documents I don’t remember signing.  I gave a statement to the police evidently as well.

My first concern on regaining consciousness and realizing what had happened was for Janelle.  She was unconscious slumped down in her seat.  Her breathing was obviously labored and when I looked towards her it was obvious that her seat belt was holding her head up by her neck.  She was being choked by the seat belt.  I instructed some people at the scene to cut the seat belt.  An argument insued with them whining about a possible neck injury.  I asked what experience they had in first aid.  To which they responded, “We’re both RN’s.”  At which point I was a bit furthered upset and said, “Well didn’t they teach you anything about the importance of the airway in stabilizing a trauma victim?  If she can’t breath, everything else is null and void.”  They promptly cut the seat belt.  Which was doubly good because she had 6 broken ribs on her right side and as a result her lungs partially collapsed.  That stress coupled with a restricted airway could have easily killed her.

They removed her from the car first, and lets just say that was the most disturbing blood curdling sound I’ve ever heard in my life.  Due to her injuries she was unconscious but aware.  I could hear her quite well as they pulled her from the car.

Once we were both extricated from the car we were airlifted by helicopter to Spokane.  So I remember the ride on the angel of mercy, the wife however does not.  We both went through long surgeries that night to deal with our injuries.  After which I spent 24 hours in the ICU and Janelle spent 48 while recovering.

So there’s the story and pictures (after the car was moved to the wrecking yard) of the Hyundai.  If we can find the packet of accident scene photos we’ll try and post some scans of them.