In which crazy comes out… (Get off my side)

Initially I was writing up a post and just ran out of time on it but that is melding into this one. You see there was a group of people who engaged in attention seeking behavior during the January 15th rally and legislative meet that has quite honestly created a serious rift. Not only has it created a rift but there is a bit more of a history involved than just, “the crazies showed up.” It should be noted that the following is my observations only and is not in any way to be attributed to any group I may volunteer for or work with.

Before the tally was even fully complete an individual started organizing a rally December 13th. There were numerous other individuals who were attempting to help ensure:

The group support route was heavily rejected. So much so that it actually made the Seattle Times as the organizer made decisions that were not exactly positive. Free permit, oh my god it’s the end of the world because they’re wanting a logistical heads up. But I digress. The permit thing became a very serious craw and caused many to just walk away to leave that organizer on his own. We didn’t detract from his protest but we weren’t supplying effort to support him, he was on his own.

At the same time, actually starting in September, conversation was started regarding an event at the capital in the event 594 passed. We directed the effort of all the groups trying to help with the December 13th rally to one where input, help, and unification actually came in to play. This however didn’t stop claims from the other group of how we were undermining or attacking them. How no one really knows.

As we closed in on January 15th, it became more and more common. Attacking people who were working to support what they felt were going to be effective methods instead of what many felt of the December 13th rally where it would be a giant circle jerk where nothing was really accomplished.

Well nothing happened at the December 13th rally, there was no actual outcome or changes because of the rally. Not saying that people shouldn’t have gone, but I have limited amounts of time and I have absolutely no interest in wasting my time on symbolic gestures. My goal is to be effective and actually achieve what I set out to do. I am also strategic about it and am willing to play the chess game to make it happen.

Some of people also tried to claim the rally was the work of SAF, CCRKBA, POGR, etc. Nope, sorry, hate to break it to you, it was 100% grass-roots. Know how I know? Because I was sitting at the tables helping plan the damn thing.

The morning of the 15th the rally was set up and all was well and good. At the start of the rally everyone was gathered on the steps and the speakers began. There were a couple outbursts yelling at speakers from a group of about 15-20 in the back who eventually moved all the way to the top of the Capitol steps. They had banners from the December 13 rally and were waving them. They yelled a couple of times to garner attention with one-off statements. Everyone for the most part ignored them. They started becoming more disruptive during Paige Biron’s speech. I just ignored it, that is until we heard the familiar sound of charging handles and bolts. I was mortified when I looked back to see loaded magazines being pulled and inserted and charging handles struck. This happened about midway through Joe Huffman’s speech. Who they kept trying to talk over as well. Joe did a fantastic job refusing to engage the misbehaving and distracting children in the back.

After the children started playing with their firearms there was a rapid influx of Washington State Patrol officers. One officer immediately approached the MC to find out how we would like to deal with the situation. I at the time was searching for another organizer so we could effectively talk to State Patrol. Everyone around me in the crowd, many of who were long time gunnies were noticeably alarmed and uncomfortable with what was going on. At least 3 people made comments about why WSP was not arresting them under R.C.W. 9.41.270. 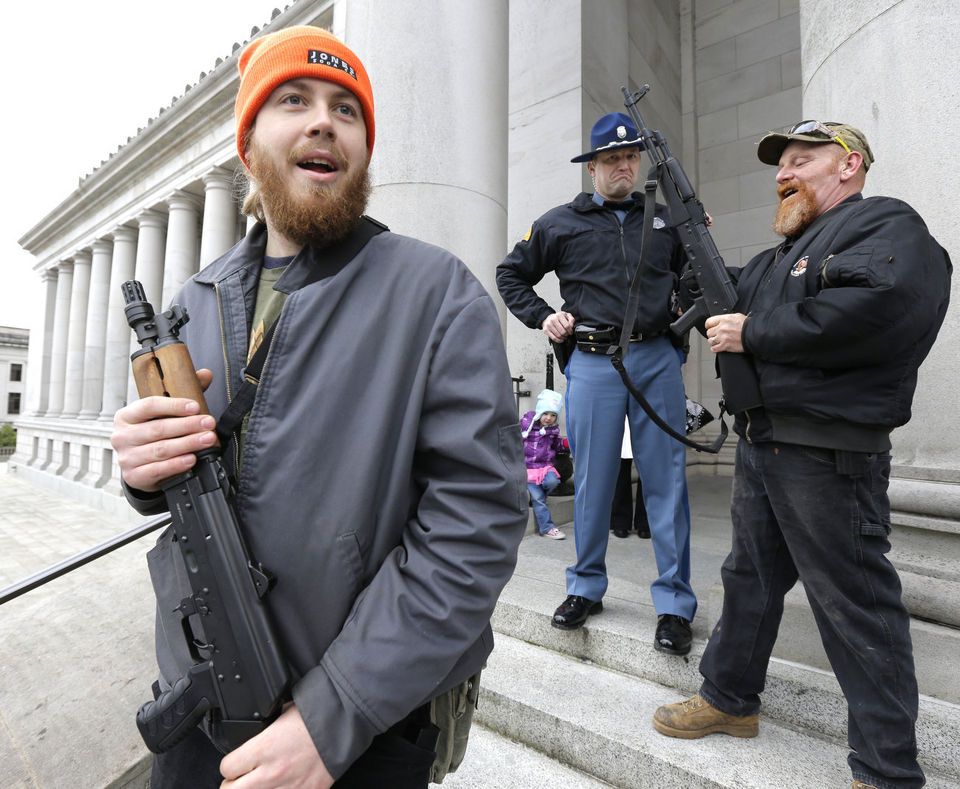 I need to buy that WSP officer a coffee.

After chatting with the M.C. the WSP officer immediately went up the stairs and shortly after the group dispersed into the Capitol. One lone individual came out yelling, “Patriots come help us storm our capitol.” After 3 times he gave up and moved on. It should also be noted they did this just before Matt Shea spoke about HB-1245 and other pro-gun bills were discussed. I suppose not being at the center of attention was too much for them.

From there they entered the Capitol, I wasn’t present for it but the news media was. 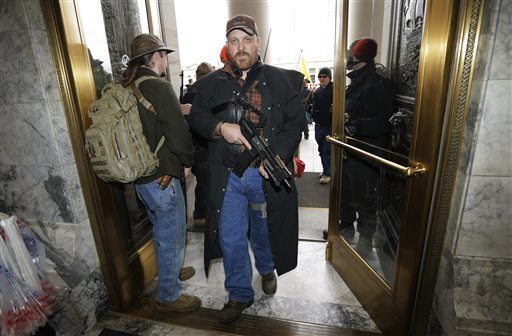 Here’s a copy of the video of what happened in the gallery.

As much time as I spent in the legislative office buildings I didn’t see any of these individuals there. I only ever saw them in the capitol building so I don’t think they were there to actually engage and talk with their legislators.

From there we move into more WTFery. 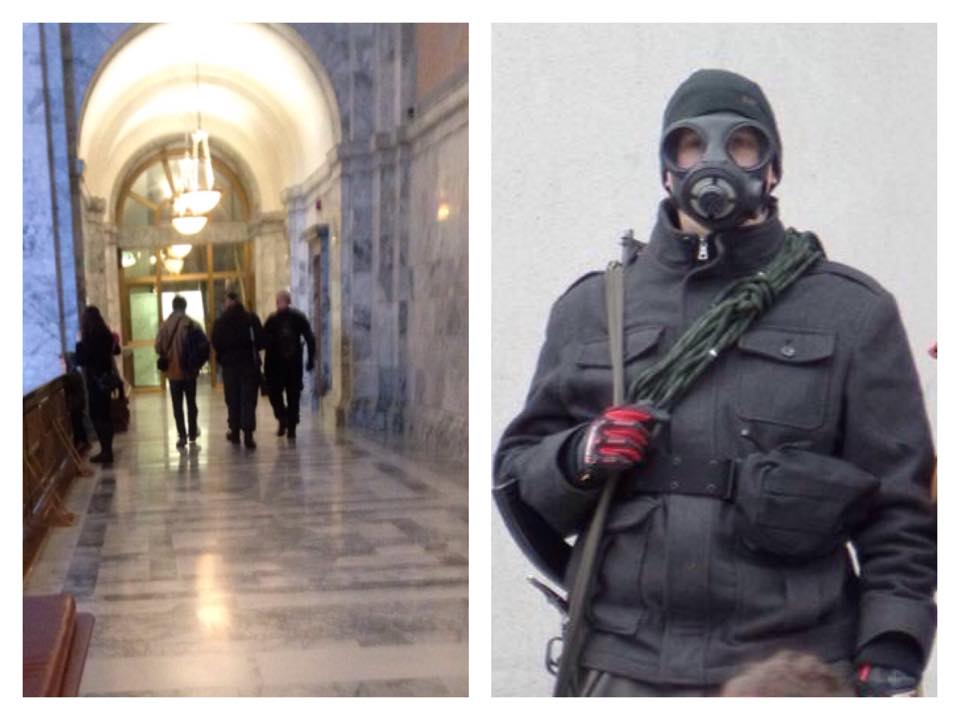 This does not help engender relations or confidence with those on the other side, much less the fence. I found out that calls were coming into Olympia dispatch about an active shooter at the Capitol. It appears there were some Legislative Aids who were unaware of the rally, and the presence of masked men and long arms raised their concern.

Boy wonder himself makes an appearance in this thread, though I’m not sure it’s publicly accessible. Watching him get roasted by our side was quite entertaining.

Press coverage did exactly what you expected. Focus on the crazy, ignore the every day individual. 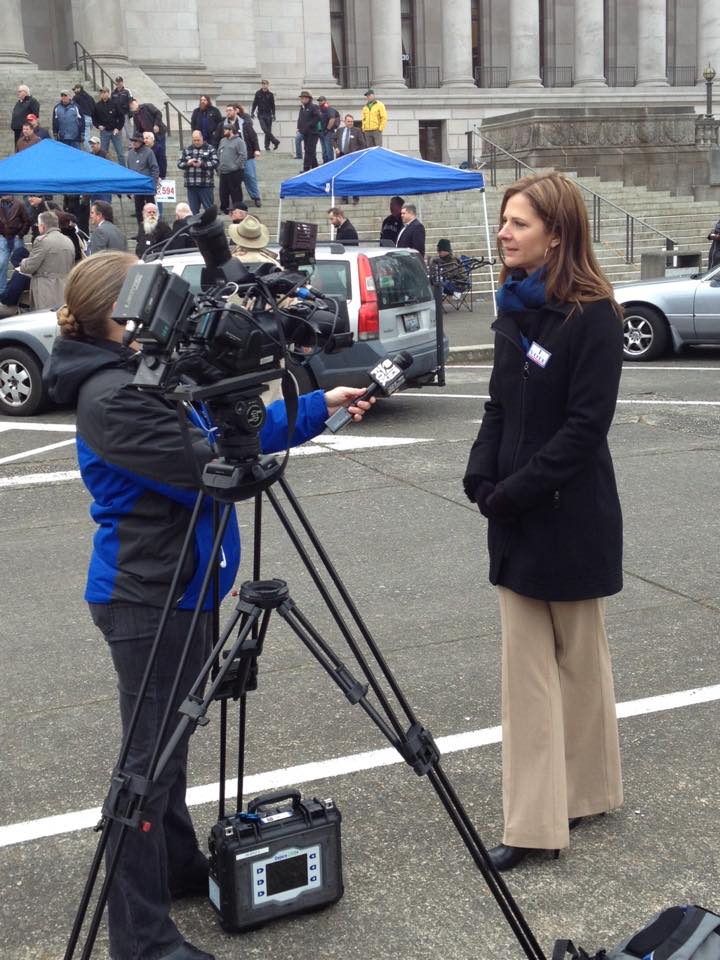 Thankfully Q-13 did air part of their interview with Adina, however most of the actual photo coverage is the individuals above. As usual our buddies at the CSGV used the stupidity to their advantage. 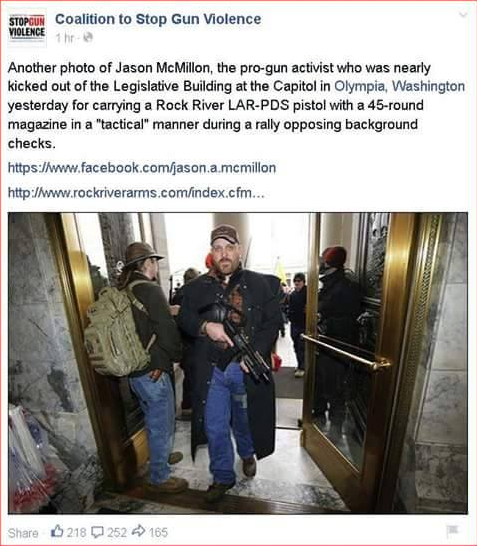 The worst part though is there is now a threat to open carry in the Capitol. The initial shot came this morning:

Lt. Gov. Brad Owen announced Friday that the public will no longer be able to openly carry firearms in the state Senate chamber’s public viewing area.

Owen said a notice of the change will be posted outside the gallery at the Capitol, likely before Monday’s floor session.

“We’re just noting that open carry is a form of demonstration and it’s no different than carrying a placard or something else of that nature,” he said.

I suspect this is going to backfire as anyone who can legally own a firearm but does not have a CPL must open carry. I don’t concealed carry or open carry, I just freaking carry. The problem is we have people like the above who carry at people and that is the problem. I suspect a bar on long guns could probably stand, doubly so as this particular group was trying to use the long guns in a form of protest which is expressly forbidden in the gallery.

Dave Workman had this to say:

UPDATE (Friday, 5:45 p.m.) The Associated Press is now reporting that the State Senate is banning the open carry of firearms in the Senate gallery. This announcement underscores the backlash being expressed by many rights activists, including people who were at Thursday’s rally, who were not favorably impressed by the open carry demonstration. There were several people in the crowd who were openly carrying sidearms, and who have been critical of the long gun exhibition.

Honestly I wish that WSP had nailed them under 270 or the violation of the gallery rules regarding protest and use of props. If you want to carry, then carry. But don’t carry and then try to break the rules thinking your special. All you do is look like an ass and make the rest of us look bad, and in the end sabotage the efforts of the people you claim to support. Not only that but you may run rights backwards by being retarded.

The organizer for the December 13th rally was arrested on the 15th. It appears yelling at a judge while approaching the bench is not acceptable courtroom behavior.

In addition, he allegedly took exception to a ruling by Judge Judith L. McCauley because she did not want spectators live-streaming video from the courtroom.

“Seim began yelling at the judge and walking toward her bench,” Gjesdal said. McCauley “ordered him removed from the courtroom.”

When deputies tried to escort him out, he allegedly began to pull away and resist. He was placed under arrest and later booked into jail for interfering with a court, disorderly conduct and contempt of court, Gjesdal said.

Most entertainingly the stupidity appeared to be genetic as his father decided to get arrested in a show of solidarity with him.

Honestly I feel a bit betrayed by my own. Get the hell off my side. As someone reminded me tonight:

“Politics is the art of the possible.”

We are quite literally trying to accomplish the impossible in a not totally friendly environment. We need 2/3s majority to touch anything and that isn’t possible without fence sitters. Further when people on our own side are shaking their heads you can turn what was a level battle into an uphill one. We most likely won’t actually get a full repeal this round, after yesterday it most likely will be DOA as it won’t even make it through committee since that’s not full of friendlies. My goal is to be effective and get shit done. Acting like a child and throwing a tantrum doesn’t help anyone. All it does is make you look like an ass. Tell me, is anyone other than the child excited when throwing a tantrum in a store?

Tagged Firearms, I-594, War on Nouns. Bookmark the permalink.