This is a little long, but read the whole thing. It is another example of “Why I Carry.”

I received a text from a relative the other night… this is what it said:

So, I’m busy at the time at a business open house and on my way home I give the relative a call. 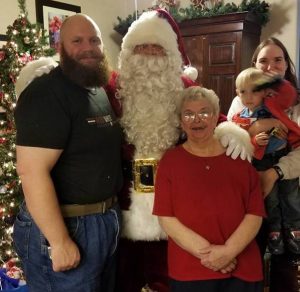 Before I get into the details of the story, let me relate the following. This relative is 74 years old, under 5 foot, and has silver-gray hair and is a breast cancer survivor. From now on we will just refer to her as: “Short Lady with the Gray Hair” or SLwtGH for short.  She drives a retired police car we picked up used for a decent price after her previous car finally began to die after 23 years of use.

I call the SLwtGH and she informs me of the events from her day.  For whatever reason that morning she decided that she needed to carry Tweety, her revolver with her.  She headed into Tacoma to play bridge with some friends.  For those who aren’t familiar with the People’s Republic of Puget Sound, Tacoma isn’t exactly the friendliest depending on where you are, but this was going to be mid day and she would be traveling home by 1500 so it’s not like the animals would be prowling right?

She leaves her friend’s house and at about 1440 she turns left off of E 38th street and heads North on East Portland Ave.

The full frame of the incident. The distance from E38th to Fairbanks is .4 miles.

At the time she turned left she checked her rear view mirror and saw no one behind her, blind spot clear she moved from the left lane to the right lane.

At East Fairbanks she noticed two dark color vehicles approaching from the rear. She maintained speed at 40 thinking  this is nothing significant, other than traffic.

One vehicle rapidly speeds past, immediately pulls in front, rapidly stops forcing the SLwtGH to slam on her brakes. The second car blocks the drivers side preventing immediate egress from the area. The only exit is backwards or through the vehicles.

Suddenly there is a siren and lights approaching from the east. The officers pull in front of the two black cars blocking any attempted egress and the officers exit the vehicle weapons drawn.  The officer and his partner in the first car immediately took control of the situation and put the individuals in custody. Two other cars arrived shortly after.

After the officers had placed the individuals in custody they approached the SLwtGH , asked to see her weapon and carry permit.  She was then informed they were well acquainted with subjects, she was absolutely justified and had nothing to worry about. They would be going away for an extended period on multiple warrants. She was thanked for maintaining poise and thoughtfulness.

She let the officers clear the scene and then she did so.

Major notes, the criminals were traveling in packs, attempted to attack what they thought they was a soft target. This event happened in broad daylight on a thoroughfare.

AAR and my takes:

Most likely this was an attempted car jacking. As the SLwtGH was driving a retired police car it is both hardened, as well as useful if you want to imitate being an officer to rob people.  Overall the event happened quickly, it was lucky there were officers in the immediate vicinity. The SLwtGH kept her cool and remained calm event though she was under stress.

In this incident all three elements for deadly force existed:

While giving a debrief she noted that even if she attempted to back up, she would have still had difficulty fleeing because of the distance required to get around them. I reminded her of two things.

Remember your vehicle is a weapon, don’t be afraid to use it as such.

This kicked off fairly fast, I’m impressed SLwtGH was able to get 911 on the horn and have her firearm ready to rock.

This was most likely because she did not sit in denial of the events happening in front of her. Many people when confronted will deny what’s going on, trying to rationalize that this isn’t really happening or that they’re being hyper critical and the danger they’re seeing isn’t really there.  Process your input and act on it, don’t deny what you’re seeing, don’t down play it. Let the data and events speak for itself. If new data says it’s not as dangerous, great, but don’t trying and play the hypotheticals as it is happening.

Her firearm made the difference.

The presence of her firearm interrupted their game plan. This was a defensive gun use, however statistically this wouldn’t be counted.  As a side note this makes for 5 defensive gun uses in my family, in all 5 instances there wasn’t a shot fired. They had their own preconceived notion of how this was going to go down. They figured it was a soft target and would need little effort other than intimidation. When they approached the vehicle, the firearm caused them to suddenly need to start working on a new game plan. I’ve seen this happen personally in another incident where the individual was armed.

If you find yourself in a similar situation that is the moment you need to capitalize on. What has happened is the initiative has flipped, they no longer have the edge of their plan. This is when you can either talk the person down, I did in one case, wait and see if they’re going to decide discretion is the better part of valor, as the SLwtGH did here.

Additional side note, if they are already committed to performing an act of violence in their plan such as shooting you, they will likely not freeze or stop. I suspect this is because mentally that haven’t counted on the escalation path and the probability of them not surviving the encounter. Someone already committed to the violent act will most likely not waver.

Sean’s notes on this are spot on. We’ve got yet another crap gun control initiative in this state being funded by Bloomberg and company. In two weeks time there were two defensive gun uses within my family.

The issue isn’t with firearms, it isn’t with law-abiding gun owners, it’s with the tolerant behavior surrounding violent crime. We’re restricting the rights of the innocent under the guise of stopping criminals, and then acting surprised criminals are becoming bolder, because they don’t care. In the end, criminals prey on the weak. Why are we wanting the people who’ve contributed to society and continue to do so turned into prey?

Final though, don’t tell me you want to ban firearms or otherwise disarm innocent people, I am sick of playing that game. The only way the SLGH had any chance there was a firearm. Even if they had just had clubs, she’s old, small, and out numbered. You’re a sick horrible person and honestly, the body count of innocent people being dead isn’t on us. We carry every day to protect ourselves and those we love. Just look at the pastor who stopped a car jacker when he was taking his 6th car after previously shooting numerous people.

So don’t you dare tell me blood is on our hands for supporting gun owners and law-abiding citizens. 5 defensive gun uses, not a single shot fired in any of them, and in the last one:

The Short Lady with the Grey Hair stared down a bunch of armed thugs to the point where they’re now sitting in jail.

How ready are you for when violence shows up unexpectedly? Remember it doesn’t call ahead, you’re not really going to get a warning until it happens. Are you ready to be like the Short Lady with the Gray Hair?

One Response to The Greatest Equalizer…