From the below screen shot, you will see I just got mine! 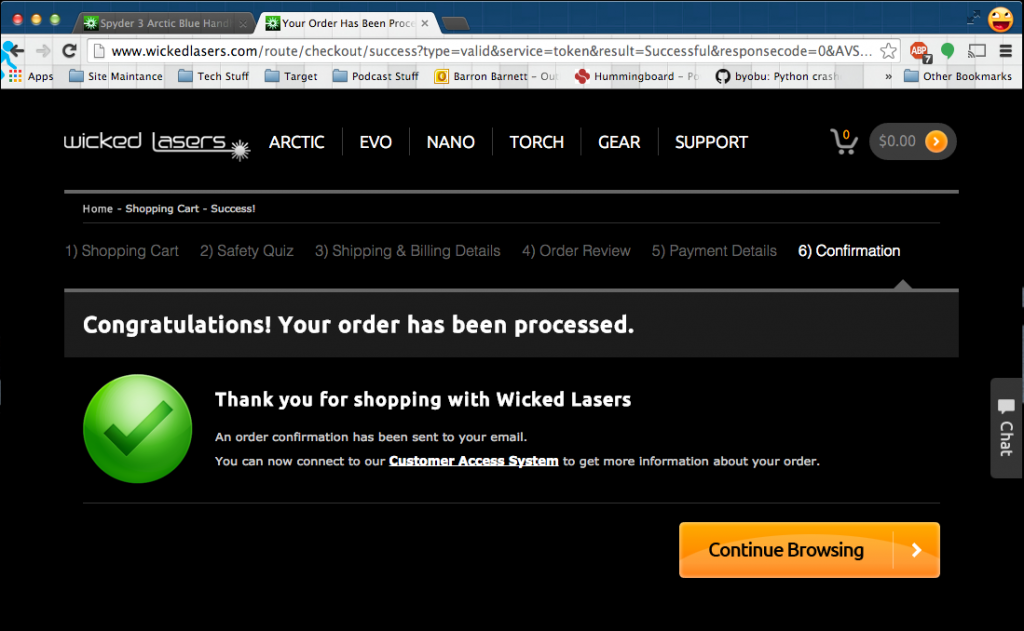 What am I talking about I hear you ask?  Well check this out: 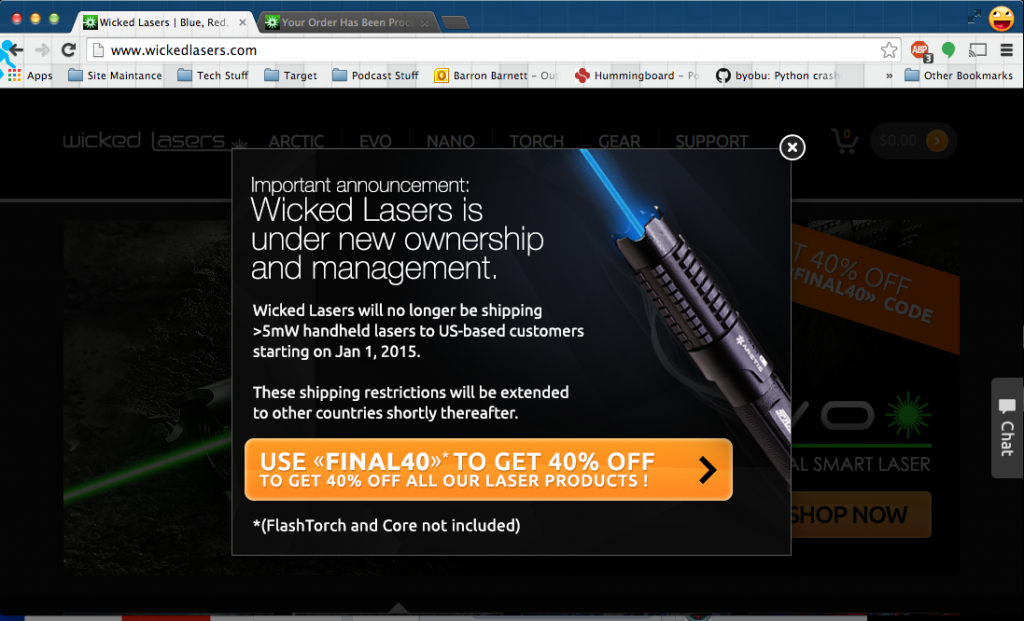 Ry informed me about this last night so I just bought my Wicked Lasers while I still could.  The only thing I didn’t get was the beam expander.

I hate it when the main reason I go and buy something is because it’s:

a) being banned from import.
b) being made no longer legal for purchase.
d) being limited for purchase due to fear of legal action.
c) any combination of the above.

So I just bought something I hadn’t planned on buying because while I was figuring on getting one in a year or two this is my last chance.  I was also able to get it for almost half off because of that too.  So don’t ever tell me I didn’t warn you that you were going to be limited to 5mW here soon. This is your warning. Go buy your 2000mW laser now!

Remember to use gift code FINAL40 (case sensitive). Your welcome.

The Glitch Mob – Can’t Kill Us

The election didn’t go the way gun owners in Washington needed it to. Before the vote was even fully solid a particular individual decided to start a rally down in Olympia. While I can speak with no certainty on the organizer’s intentions, given his history, and behavior towards others within the community I really want nothing to do with this rally. Doubly so as the rally is occurring when the legislature is not in session, there is no end goal I can find or figure for the rally other than being largely symbolic and in the end providing stock footage of people wearing camo while carrying guns for the media for years to come.

For the most part I’ve been following the guide of “let people make their own decisions”; if you want to go, go. While I am more than happy to usually crucify people who piss me off, the event itself hasn’t done anything to wrong me, yet. I am trying to give it the benefit of the doubt; however I do not see a reason to invest my time in this venture.

Which brings me to the title of this post. The weekend after the election I was working the SAF table as a volunteer in Monroe and there were a couple interesting incidents. One in particular though created the backdrop for this post.

You see a group of men approached the SAF table and were conversing with another volunteer while I went to arrange to have a custom sticker done for my laptop. When I came back the group was handed over to me. The question was on the rally mentioned above. I made a comment that the SAF has nothing to do with the rally and other than that I’m not in a position to make a statement from the point of view of the CCRKBA or SAF.

To which they then ask, “Well are you going to go down yourself, doesn’t have to be a part of a group.”

My reply, “Personally no, I do not think it will be an effective use of my time. My legislators will not be there, there is no real purpose behind me spending an entire day of my time for something with no clear end goal.”

They then proceed to try to tell me how the media will be there and we will be able to control the message. I then ask if he’s going to be in the editing room to make sure they don’t edit things to fit their normal narrative, and then state I will be going down once the legislature opens in January to visit my legislators but my time is precious.

He argues with me again and when I refuse to budge we get down right hilarious.  I was told, “You’re absolutely useless. You should go join the NRA because you’re useless and aren’t willing to do a damn thing to fight this.”

“You’re absolutely useless. You should go join the NRA because you’re useless and aren’t willing to do a damn thing to fight this.”

That was said to a guy sitting in a booth as a 100% volunteer, who isn’t getting paid a dime for his time. I am happy to do it because I see where my efforts are going and the impact it will provide. While sitting in that booth I do a few other things in the free time spaces such as writing up info for a new group I’m working on starting with a friend. I work on web hosting for a client base that is entirely RKBA based. That server I largely operate at cost or at a small loss, doubly so when you consider the time I spend doing server and site maintenance doesn’t get included in the operating costs. Included in that list is the web hosting for the group running the gun show he was standing in. Again, when I get called up for problems; I help because of what they’ve done for the community. I could turn around and bill them like I should but I figure that money could be better spent for the benefit of all gun owners.

So this asshat, and he is an asshat, didn’t know me, who I was, or what I am doing for the community. Instead he felt it his right to attack me because I wasn’t jumping on his bandwagon. I suspect he was angry because instead of being active over the past year he was counting on other people to do it for him. Now since 594 passed he wants to finally pick up and fight. He’s more than happy to attack anyone who doesn’t fit in his groove because he has to blame someone other than himself. I must be the enemy because I’m not doing what he wants.

So no, I am not going to the rally in Olympia December 13th. I want nothing to do with it if this is the type of people it is drawing out of the woodwork. The rally could be either good or bad and it depends entirely on the attitude of the leadership and participants. At this point I have no faith in either of them. Most certainly I don’t need go be around people with toxic attitudes like that.

Seriously, I know why I do this but when someone treats me like that you know what I ask myself?

Why the fuck do I bother fighting here. These people don’t give a shit about me or my time, they’re more than happy to waste it. If I don’t let them waste it I’m attacked. Maybe I should just leave the state, the voters obviously don’t want me here and it appears the gun owners don’t either.

*It should be noted I directed him to google my name and NRA then come back and talk, but until then to please walk off.  A few people were dragging him away because it was obvious I was getting ready for blood. Sadly I didn’t think of it at the time but I should have just called security and had him removed from the show. He directed a personal insult at me, he was a WAC member, and that is a violation of the bylaws. It probably would have saved the volunteer over at the NRA booth some abuse as well. I have to admit it would have been fun showing up at the board meeting and laying out the list of what I do, largely as a volunteer with a professional commitment level, and then letting him explain how that wasn’t an insult.

I’ll have more on what the attitudes are like in a couple of weeks. I’m still burning in overdrive running at the same pace I was pre-election. Hence me looking at this bullshit and being less than enthused. I’m either working for a paycheck or working to support RKBA and any activity of eating our own is not productive. So if you want to go to the rally, go, that’s your choice. I’ve explained why I’m not going to be there.

TL;DR: Pro-tip, before opening your mouth and acting like a total ass think before you end up eating you’re whole foot. You’ll do more damage to your argument than proving your point. What it will do is turn people off from your position.