Mayor Daley and his group of cronies have already started working on their new methods of victim disarmament after the McDonald ruling. Due to the ruling they can no longer maintain an outright ban so instead they have a new solution to their self constructed crisis.

“One handgun is sufficient for self-defense. We believe that a limitation on the number of handguns to one-per-person-per-residence would be consistent with Supreme Court” rulings overturning handgun bans in Chicago and Washington D.C., Georges told the City Council’s Police Committee.

What research was done to reach the conclusion that one firearm is sufficient? If you allow one firearm, why do you need to further restrict them? Reading further provides their warped answers.

A Chicago ban on gun dealers would be similarly motivated, Georges said. She noted that there are 45 dealers within 13 miles of the city’s limits and ten within one mile.

“Gun dealers have access to large quantities of guns. Gun stores, therefore, present a serious risk of guns flowing quickly into the community and into the hands of criminals through theft or through illegal trafficking,” Georges said.

Your new solution to outlawing guns becomes obvious; don’t outlaw the guns, just outlaw the dealers. If we can’t prevent someone from owning one, just prevent them from buying one. This follows along the same line that was used in the Heller decision regarding fully automatic weapons.

Accordingly, under Heller, Fincher’s possession of the guns is not protected by the Second Amendment. Machine guns are not in common use by law-abiding citizens for lawful purposes and therefore fall within the category of dangerous and unusual weapons that the government can prohibit for individual use. Furthermore, Fincher has not directly attacked the federal registration requirements on firearms, And we doubt that any such attack would succeed in light of Heller.

It is ironic that the legality of machine guns would be determined by common use because it is artificial regulation and control through the NFA and GCA of 1968 that prevents their common possession. Previously unconstitutional legislation created the conditions necessary to make it allowable under the constitution according to the court. However the law is not a fluid object subject to interpretation or changing political environments, it either is legal or it is not. There is no grey area. Just the same there is no gray area about whether a law is trampling someone’s rights or not. Also I feel that the phrase “The right of the people to keep and bear arms shall not be infringed” to be quite clear and concise.

Lyle I think said it best:

Try this mind experiment, next time you see or think of someone or some activity that you hate, or that someone else hates.  Ask yourself; “who’s rights are they violating, or trying to violate?”  That’s a very clarifying and even liberating question.  If the answer is “no one’s” then move along.  Nothing to see there.  It’s time to dig in and start minding your own business, and hopefully you’ll have the freedom to mind your own business without someone trying to mind it for you.

More than playing outlawing games though, Daley and crew are not arguing facts, they are not arguing reality, they are arguing potentiality. Potentiality is not fact, it’s not reality, it hasn’t happened. Potentially Mayor Daley can run someone over with his car and flee the scene committing vehicular assault/homicide and hit and run; therefore his license should be suspended.

Ultimately anything is a potentiality, however statistics don’t lie and the potentialities they argue are some of the most outlandish around.

Side-note:There is a serious issue with the picture in the news article.

Keep your booger finger off the trigger! Especially while loading. Yet another person unfamiliar with firearms handling them for the wonderfully unbiased media.

At this point there no easy landing.

Reduce taxes and pray that the private sector can pull out of the dive in time.

That’s about as likely to happen as Obama skipping a golf game to do some work.

Alan Andrews – “Do you know anything?”

I cannot really add anything to that, but I absolutely LOVE that last line. -B

I stumbled across an article today detailing how an 86 year old disabled woman was abused and Tasered by her local police department. Personally I think each of those officers should be castrated and keelhauled. This behavior is completely disgraceful and just goes to further show how out of control government agents are. That TSA story is not the first story I have heard of incidents like that. My father-in-law is a below the knee amputee and has similar stories.

They have absolutely no respect because there is no accountability. They are protected and shielded from their abuses. If someone attempts to protect themselves from the abuse they further use their power to disrupt their life until their objective is achieved. I would like to note, they appear to overstep their bounds when victims are least likely to be able to properly defend themselves.

If they physically abuse someone who was having a possible medical emergency where does it stop?

While the rest of us have been tightening our belts and shoe stringing our budgets.  Our congressional leaders have found it convenient to just skip the budget process all together.  The GOP is claiming that the 2011 budget has been canceled.

WE REGRET TO INFORM YOU THAT

PLANNED FOR FISCAL YEAR 2011 HAS BEEN CANCELLED DUE TO WASHINGTON DEMOCRATS’ OUT-OF-CONTROL SPENDING SPREE.

AN APOLOGY FOR THIS BETRAYAL OF AMERICAN TAXPAYERS DOES NOT APPEAR TO BE FORTHCOMING AT THIS TIME.

BE ADVISED THAT THE FOLLOWING SERVICES WILL BE INTERRUPTED:

Carrying out the “most basic responsibility of governing”

I don’t know how true it is as it could be a scare tactic from the GOP, but with Obama’s track record, it wouldn’t be surprising. Is the actual budget being dropped?

I find it ironic as well that our fearless leader talks about getting our spending under control.  Those of us in the real world know however that requires a balanced budget.  What a liar.

Thanks to Allen over at SnarkyBytes I discovered this little jewel. 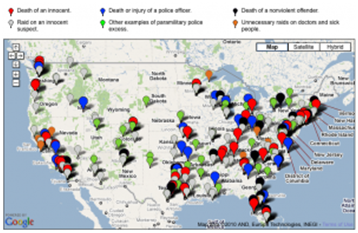 I have been screaming for a long time that No-Knock warrants need to disappear. The blue flags don’t anger me unlike the rest of them. I consider the blue flags karma. It’s the red, grey, and black why they should be ceased IMMEDIATELY.

As today is Flag Day, this is rather offensive as not only is the flag being worn as clothing, but it is also touching the ground. Proper and respectful flag etiquette should be practiced at all times. Below is a list of what not to do with the American flag.

The flag should never be dipped to any person or thing. It is flown upside down only as a distress signal.

The flag should not be used as a drapery, or for covering a speaker’s desk, draping a platform, or for any decoration in general. Bunting of blue, white and red stripes is available for these purposes. The blue stripe of the bunting should be on the top.

The flag should never be used for any advertising purpose. It should not be embroidered, printed or otherwise impressed on such articles as cushions, handkerchiefs, napkins, boxes, or anything intended to be discarded after temporary use. Advertising signs should not be attached to the staff or halyard

The flag should not be used as part of a costume or athletic uniform, except that a flag patch may be used on the uniform of military personnel, fireman, policeman and members of patriotic organizations.

The flag should never have placed on it, or attached to it, any mark, insignia, letter, word, number, figure, or drawing of any kind.

The flag should never be used as a receptacle for receiving, holding, carrying, or delivering anything.

If you want to garner support for a political cause, it is not done by disrespecting and disgracing the flag.  Also no flag is to be flown above the American flag.

Illegal immigrants like what comes with being in America, but their allegiance still lies with their home country.

Uh oh, the egg toss is gonna cause a divorce.

This was the announcer’s response to a couple play arguing after the husband missed the egg tossed by the wife at Genesee Community Days yesterday.

Someone needs to get a clue and STFU. The very first picture is of one of the nicest couples I know. There is no problem with firearm ownership no matter a person’s location, especially when it is in someone’s own home. Personal defense is a God given right that cannot be taken away. Its obvious how left the Huffington Post truly is.