This is my short little after action report on the precision rifle clinic 2010. Friday was a great day for shooting. Winds around 4-8 MPH I discovered my zeros from last year were still good, no real surprise there though. Though I did get a solid reminder in the pre-shooting rifle check. I don’t know how, but the bases of my rings came loose and could have caused some serious issues. I discovered my BDC on my second rifle was quite accurate and was easily putting rounds on the steel at 700 yards. 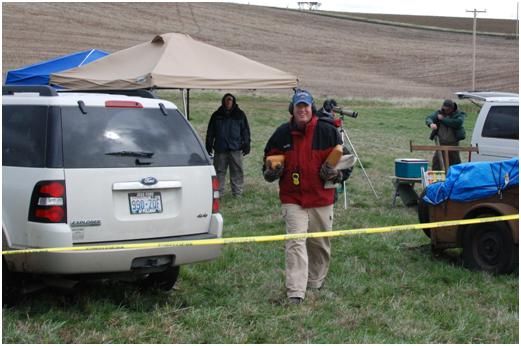 Bill Waites carrying his gear through the cold and wind up to the line on Saturday. Note the canopies bowing from the wind.

On Saturday morning shooter spotter communication was made difficult by the 10-20 MPH gusting winds. Sucks for making sure you’re heard with your hearing protection on over the wind, however it was just like my first year out there, perfect conditions for learning and practice. We got our 380 zero, and moved out to 625 and had an interesting experience. At the time we moved out winds calmed down a little. My spotter called the wind estimate, checked my book, cranked in the elevation and windage. Got on target, broke the shot dead center. Spotter call center hit. I prepared a follow up shot, my spotter however missed that in the matter of literally seconds the wind shifts from about 5-6 MPH to 16-20MPH. He tells me to hold center again I squeeze it off, 3 Mils left. Crank in the new windage, now I’m 2 Mils low, crank in the elevation bang dead center again. The lesson from this was that the spotter needs to really be aware and willing to issue a hold. Also, viewing trace and splash in the high winds is extremely difficult. The scope is vibrating from the wind and it blows the trail and splash out. At this point we moved back down to 380 and spent time practicing holds, favors, and calling winds since they were changing again. I knew we were on our game when we shot our boomers for the day. Ryan cleared his 3 boomers in the wind in 4 shots, first shot was slightly left. I cleared my 3 in 4 shots, my first went slightly right. When open season was called, we took an additional 10 boomers. I think that count only got so high because Monty ran out of ammo, who was a total bad ass by hitting a 7 inch target turned on its end. He only had a 1 inch wide target to hit, it was gone second shot.

The other comment I have, those who saw me this weekend can testify, make sure to wear sunscreen. On Friday I arrived a little late and went straight to shooting, forgetting sunscreen. My nose is roasted, toasted, and blistered, along with my forehead and cheeks. I will be spending the rest of today doing video and pictures of Boomershoot 2010.