The Minuteman » Unfiled » The Economics of a Degree

The Economics of a Degree

Recently there have been a couple posts regarding higher education and student loans on a blog I frequent.  The wife and I having both recently graduated from a four year university thought we would provide some extra input about our observations.

I graduated from Washington State University with a BS in Electrical Engineering.  Starting salary  for a BS averages about $60K, MS $71K, and a Ph.D. $88k nationally.  The 5 years it took me to earn my degree cost approximately $90K total.  I could have taken a job as a CCNA immediately out of high school and made about $30K per year.  So, for 5 years in school, I spent approximately $90,000 and also lost an additional $30,000 plus raises for gained experience, figure at the end it would have been about $34,500.  So combining the opportunity cost, and the actual cost of my degree I’m in the hole approximately $250,000 dollars for my engineering degree.  Though I also am a little bit further off than most since I also had my CCNA, we could use a lower salary in the $18,000 range and it still comes in  at $185,000.  Using the average BSEE salary,  it would take me 14 years before I broke even with my earning power as a CCNA because of the debt.  This approximation does not take into account full promotions, it just assumes an annual 3.5% pay increase per year.

Comparing the MSEE and the BSEE, the advantage of the MSEE is not very apparent. It takes 18 years for the MSEE to equal the total income from the BSEE. 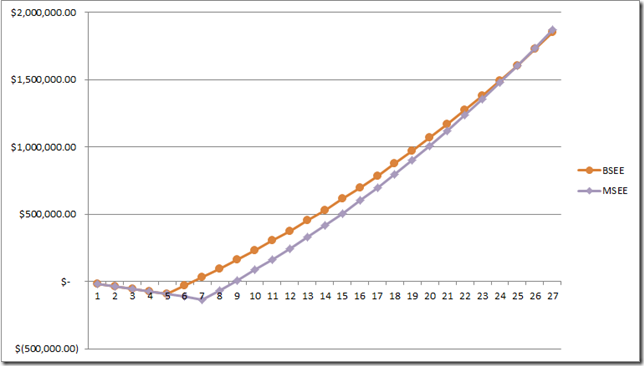 This doesn’t even include some very basic things a BSEE could do to have a great advantage over a MSEE such as passing his EIT.  If the MSEE wanted to get his professional engineering license, he would be at minimum 2 years behind the BSEE.  This is because a 4 year apprenticeship is required.  But so far only a professional science degree has been covered, what about other science degrees.

The above would still hold true except now you have a new problem.  Finding a job to go with your degree.  Engineering jobs are usually in demand, before graduation I had multiple offers on the table, while jobs for Animal Science or a Biological Sciences degree not so much.  The wife got two Bachelors degrees from WSU, one in each of those fields.  She got the second degree hoping it would provide more job opportunities and didn’t require a lot in extra classes.

She spent an extra year in school getting the second degree, another $18,000.  In the end becoming a certified nursing assistant landed her a job, approximately $500 in a certification.  She has two degrees that she is unable to use.  She still has all that debt from her schooling though that is not actually working to increase her earning power.

I had another friend that went to school for a degree in business.  I know she aced her way through, but again no demand for a job.  Business majors are a dime a dozen, and what can they actually produce?  I know that overcoming the opportunity cost curve in her present state will be difficult.

I have another friend who got a degree in Oceanography.  He knew going in it would be difficult to find a job, however at the time the future employer was “The Department of the Navy.”  CNET though threw a wrench in that, he finished the degree anyway.  He’s now enlisted in the Coast Guard, hoping to use the degree but doesn’t look likely currently.

From the above a couple lessons can be learned.

Do not take this as I am anti education.  I am anything but, to me education and learning is a life long process.  However I think the role of college in learning and education has been warped and twisted beyond something useful.  I did learn a lot in the process of getting my degree, however over half of my time was spent on things that were truthfully useless and did not contribute to my goals.  They certainly aided in keeping me in the school for longer, with me paying tuition.

Which leads me to my final rant.

I graduated with 152 credits, minimum is 120 to graduate, minimum for a BSEE is 145.  Why so many?  Because the college’s extra requirements, (classes that do not pertain to the subject), and then still meeting accreditation requirements for engineering.  Engineering fields have hard technical accreditations, that’s why the degrees are valuable.  However to meet that accreditation, many different classes are required.  The school then to “round” the student says we want you to take these classes as well.  Most of those rounding classes are politically correct garbage.  The bare minimum for the EE degree can barely be squeezed into a 4 year program.  You usually average about 18-19 credits a semester.  All engineering fields are extremely high, while other programs are about 15 credits a semester.  To put that in perspective, an engineering student takes one or two classes a semester more than a non-engineering student.  It is on the verge of becoming a 5 year program, but if that happens the school will loose funding.  WSU then adds another required general class.  To make the program remain 4 years, they will trim the value of credits for EE specific classes, but the altered class will still require the same amount of time.  A good example was my power lab, 2 credits, 6 hours a week in lab.  As a lab it’s weighted differently, but by hours it should have been 3 credits.  They did the same to other classes.  Overall my college experience was late nights, long hours cramming, doing homework and labs.  Remember those extra classes a semester, remember the professional degrees have real classes, not basket weaving.  They took lots of time and effort.

It’s obvious college is nothing more than about making money, and the student is the one who’s pocket is being picked.  If you want to keep your money and come out a head, you need to have a plan and understand the game.

Update: If you are a veteran using your GI bill, to get the most out of it, try and major in something related to your MOS.  For example a buddy of mine was an Ex-Nuke and had worked in the WSU steam plant after he left the Navy.  He went back to school and graduated at about 36.  His major was computer engineering, however he also took a lot of classes pertaining to power and controls systems.  He will make up the total cost after about 8 to 9 years.  The degree allowed him job opportunities he wouldn’t have had otherwise, and the prior experience was still included.  His degree choice also didn’t make him have to start over.  Maximize on your experience, again look at the professional degrees and find a field that will let you use your military experience and training, it can actually put you at a higher pay grade than just having the bachelors.

2 Responses to The Economics of a Degree