The Minuteman » Unfiled » A life of Victimhood

A life of Victimhood

CSGV’s Facebook page is becoming an everlasting document to prove fear mongering to gather support.  Their latest attack was against AntiTango, for this post.  What’s interesting is what they chose to complain and then lie about.

Evidently making your kid eat his dinner qualifies as child abuse now.  These people are so obsessed with victimhood that they perceive every action as having a victim.  This even includes the act of self-defense. 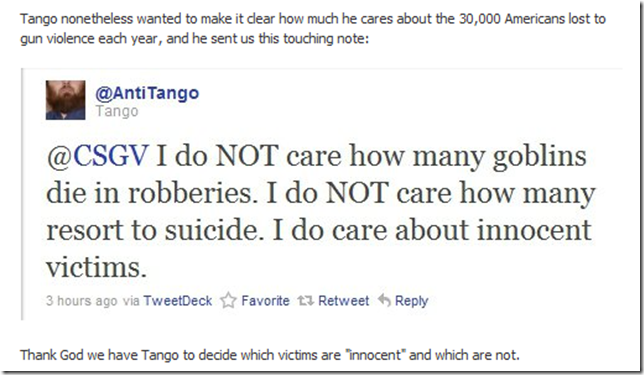 That’s right folks, they admitted that they believe the aggressor is the victim when someone being attacked defends themselves.  I have altered the situations below to reflect their process failure.

I could keep going but that should illustrate the process failure.  They do not understand that in each of those cases the person they are calling a victim is anything but.  They ignore and discard any defensive gun use, even if there isn’t a shot fired.  They then extended this victimhood mentality towards tango’s child. 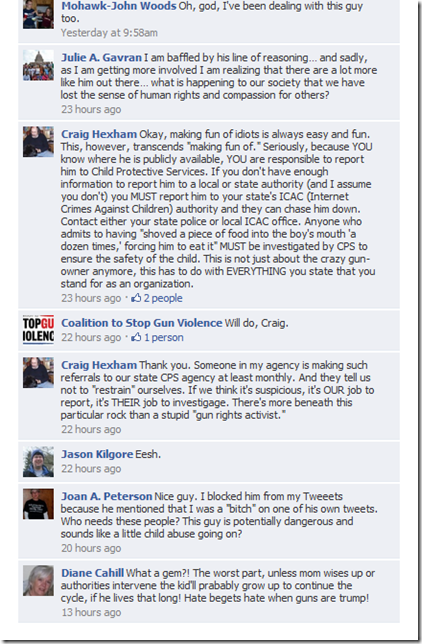 If you skipped the drivel, just note comment #3 from Craig Hexham, as well as the comment from Joan Peterson herself, the last one is a gem as well (see what I did there).  They all seem to think that making a kid eat his dinner is causing the kid pain and suffering.  I was a picky eater when I was a kid, still am actually, but I will usually try anything once, doesn’t mean I’ll like it.  So was that child abuse by my parents growing up?  NO because if I didn’t eat I would be a starving kid.

My dad when I was 6 months old was making sure I retained my natural ability to swim.  He was trying to get me to leave him and swim a foot to the wall.  I would hold on to him and eventually I would get upset and start crying for no real reason.  He was holding me and I was well above the water, his response, dunk my ass under water.  When I would come back up shortly there after, we’re talking seconds, I wasn’t gasping for air (note the dive reflex in babies), but I stopped crying.  Eventually I figured out the wall was a more stable object to hold onto and swam the foot.  A woman proceeded during this whole even to yell and scream at my dad that it was child abuse.  She had two kids, about 4 and 5, neither one could swim at all.  I swam competition through junior high and high school and still am an excellent swimmer today.  Some would claim it was child abuse, however I as the supposed victim by the method of CSGV’s thinking would vehemently disagree.

What we are actually seeing, it’s actually common even out side of this immediate realm, is the use of children as leverage by the threat of CPS  to force the other side of the argument to yield.  In this case CSGV lied, created a situation, and is now claiming to contact CPS because ultimately they disagree with the parenting style and politics of the parent.  That is not CSGV’s kid, that is not the governments child, neither has any business telling a parent how to raise their kid.  Child abuse is real and it is a problem.  This is NOT child abuse and to claim this as such, as well as other aspects that pertain to parenting and raising your child, demeans every person who ever actually suffered it at the hand of their parent.  My only hope is that whoever ends up investigating this turns around and fine’s your ass for filing a false report.

H/T Sebastian who also has something to say on it here.

2 Responses to A life of Victimhood