So Tam talked about her bad luck in having the date of her dentist appointment off in her head.  She’s not alone in having bad luck currently.  Our summer thus far hasn’t been too severe, been up in the 90’s yes, but no real long streaks.  This past weekend that changed.

Saturday the wife and I got home from flea market I dug in and started working on some projects I had for the weekend.  The wife while she was in her office noticed the A/C unit which is directly outside her window wasn’t sounding normal.  She decided that this fact wasn’t worth bugging me about.  At about 2000 hours Saturday night I heard the thermostat relay fire and the lights dimmed a bit more than normal.  I said that was interesting until about a minute later I heard it open and said, well that’s odd.  5 minutes after that I hear it close again and the lights dim.  At this point I ask what’s going on and she said the A/C unit was sounding funny.

When I went outside to look at the unit it was buzzing quite loudly.  Immediately the unit was shut off and I decided since it was the evening I’d let it sit over night and look into it tomorrow.  Sunday I did a cursory troubleshoot to no avail.  It definitely wasn’t the thermostat but was the AC unit itself.  I knew the most likely cause was the contactor or the start/run capacitor.

Tonight a buddy from work came over to help me disassemble the unit and trouble shoot it.  We verified the voltages running into the unit.  It actually started at the beginning, but it failed on the second attempt.  We check the contactor, looked fine, ohmed clear when closed so we turned our task to validating the cap.

We initially just started pulling off wires to check values.  The values being read didn’t make any sense as they were way too low.  So we decided to pull the cap figuring it was cause it was awkward or it had in fact failed. 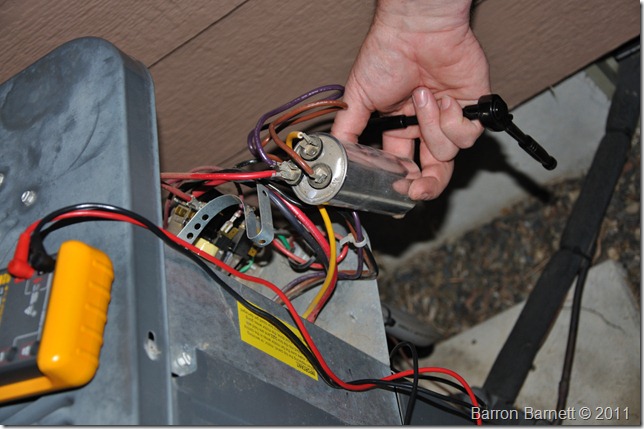 After we pulled it, we verified that our readings were correct and found the proper values it should be on the side.  Inspecting the cap though proved it had failed.

Notice that bulge in the lower part, that shouldn’t be there.  It indicates the dielectric has failed.  Hopefully this is the only issue with the AC, and there was no damage done to the compressor.  It figures with my luck though this would die at the single hottest weak of the year.  Last night and the night before it was easily dealt with cause it cooled off quickly, getting down into the 40’s.  At 2300 hours it was still 71 outside tonight.

Tomorrow is supposed to be a very hot day.  Blogging may be light because I don’t want to add the extra heat into the house until I can get the replacement cap in.

Other bad luck includes the fact The Minute Woman still hasn’t been able to find a job after the union thugs fired her for not wanting to join, the small leak I have in the I/O of my boat, or any of the other small issues I won’t bore you with.  I am reminded of a story one of my Scoutmaster’s, Paul Edwards, told.

A king asked his three wisest men into his chambers.  Upon arriving he asked them to do the following.

“Men, I would like you to bring me something that will make me happy when I am sad, and sad when I am happy.”

The wise men nodded in agreement and walked out of his chambers, a week later they returned.  The king asked, “So what have you brought me to complete your task?”

The men knelt down and presented him a ring.  The king looked at them puzzled and asked, “This is all you have created?”

They responded in the affirmative, at which point he inspected the wring and saw the following inscription, “This too shall pass.”