The Minuteman » Unfiled » PSH of Another Kind, Election Edition

PSH of Another Kind, Election Edition

So on the 2011 ballot for Washington is I-1183 which will allow stores to sell hard liquor.  As a red blooded libertarian I’m all for this.  Anything that removes a government monopoly on something makes me all warm and fuzzy inside.

A year ago there was a similar measure, I-1100 on the Washington state ballot.  It died with 53% of the voters voting against it.  That’s right 53% of the state of Washington was fine with the state monopoly on liquor.  46% of the state thankfully has a brain and was able to look at the facts instead of the FUD being spread.

Much of the FUD was quite similar to concealed carry with claims that drunk driving would go through the roof.  That underage drinking would increase, and it would increase the rate of alcoholism all around.

Fast forward 365 days and we find ourselves in exactly the same position.  We have one side that is arguing with fact and logic.  Then we have the other side arguing with emotion, feelings, and general FUD.  My personal favorite is the fact they discuss Costco has spent 22 million dollars in support of the measure.

Costco has only donated 21 million dollars, and of the total amount raise they have only spent about half. While the total amount raised is 22 million, not all of that belongs to Costco.  Damn close but when people feel it necessary to fudge numbers when they don’t have to it’s a bit disconcerting.

The group pushing the negative ballot has only been able to raise 7.5 million dollars.  Their biggest contributor is “Wine & Spirits Wholesalers of America Inc.”.  All of the donors in fact all are in the business of wholesaling liquor.  The reason being is the state monopoly allows higher prices and price gouging of consumers.

Their big negative donors are not supporting the initiative because of the children or some want to aid in public safety.  Their campaign against it exists purely to insure their bottom line.  The funding against the bill shows the true colors of those opposed to the bill as being against free enterprise and for a government monopoly of the sale and distribution of products. 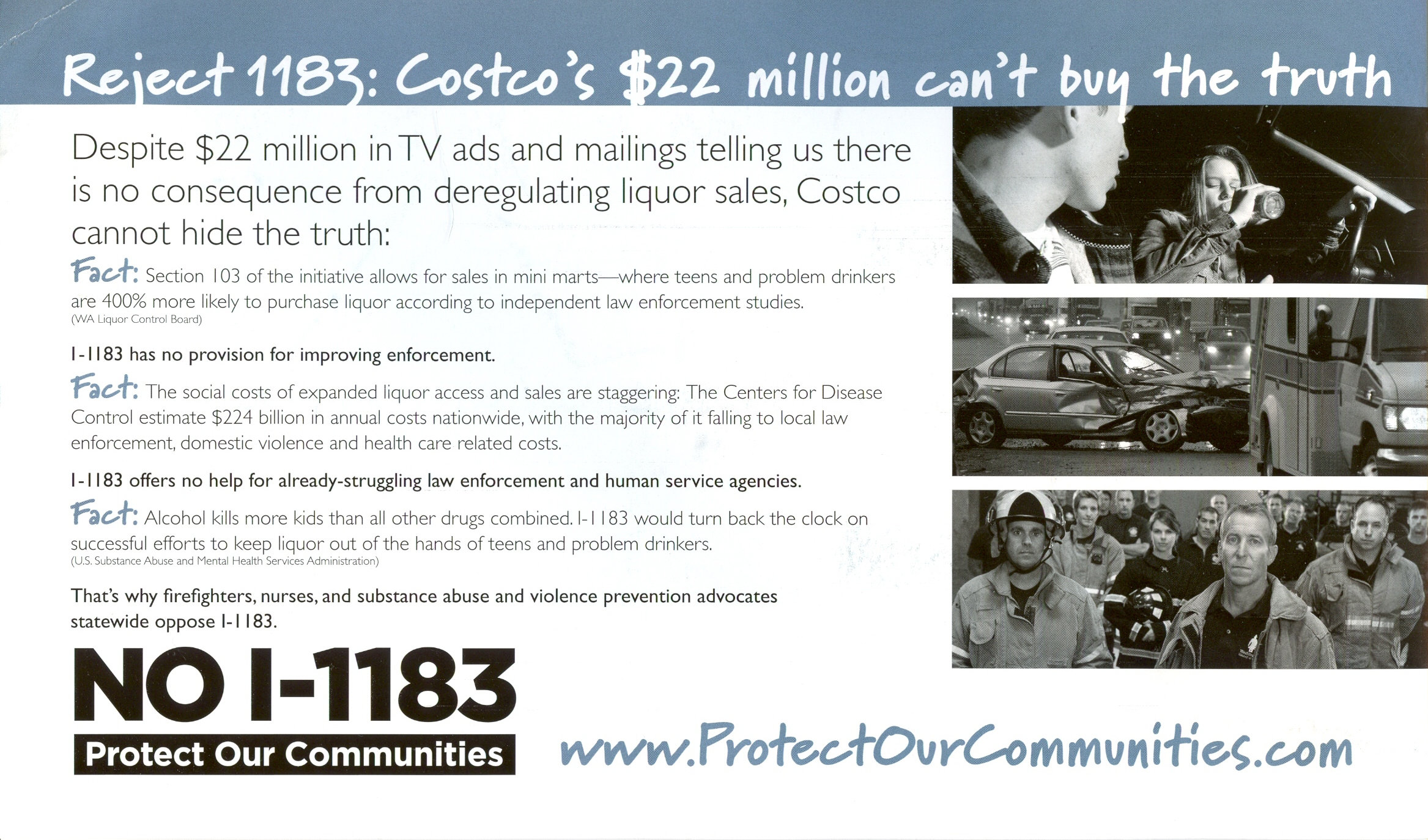 Section 103 of the initiative allows for sales in mini marts- where teens and problem drinkers are 400% more likely to purchase liquor according to independent law enforcement studies.

This jewel is provided from the WA Liquor Control Board.  No citation of statistics or facts from states who have removed the government monopoly on liquor.  Just says some independent survey says that this FUD is real.  I am aware of no change coming to the state drinking age, so the line about teens is BS.  If they’re going to break the law for alcohol they’re going to do it with or without this change.

Secondly those who have problems drinking can stay out of the areas that sell liquor just as they stay out of the state liquor store.  400% more likely compared to what!?  400% more likely to buy alcohol than someone who doesn’t have a drinking problem?  My assumption is they are saying someone is more likely to slip off the wagon if it’s sold in a mini-mart.  You know they sell junk food in mini-marts, I like junk food, I can walk my ass in and out without buying more junk food.  If the act of walking into a mini-mart causes someone to slip off the wagon, they’d fall off visiting friends who don’t have a problem.  This also ignores the fact they have a 10,000 square foot requirement to sell liquor.  That would take the mini out of mini-mart.

The argument that there is no extra provision for enforcement also fails in that the state will no longer be funding the operation of store fronts to sell liquor.  There is no change in the eligibility requirements to purchase liquor, do you want the police carding everyone instead of the store.  A store must obtain a license still under 1183 to sell liquor, and that license can be revoked.

The social costs of expanding liquor access and sales are staggering: The Centers for Disease Control estimate $224 billion in annual costs nationwide, with the majority of it falling to local law enforcement, domestic violence and health care related costs.

They then top this off with the icing that law enforcement and human service agencies are struggling.  Currently the State of Washington is in debt.  Our fearless leaders always have a habit of cutting vital services first to create a panic that will aid in passing tax increases.  Currently schools and many other areas are suffering in the funding department.

Fact, we are in debt, we do not have the money to pay all our bills, and we are running a monopoly on liquor that is costing us money.  In the world of finances, this is a very stupid decision.  The argument against correcting this issue is to play on the heart strings and emotions of others.  There are arguments about the increase in costs due to those who are drinking.  That relies on their assumptions of blood in the streets to be correct.  Further the increase in funding will help close the deficit and make sure departments get the funding they need.

Interestingly enough there are firefighters who agree with my statements above, but you won’t hear the 1183 nay-sayers talk about them.

Alcohol kills more kids than all other drugs combined.  I-1183 would turn back the clock on successful efforts to keep liquor out of the hands of teens and problem drinkers.

Again, the drinking age isn’t changing folks, it will still be just as illegal to sell alcohol to minors.  Again this relies on their prediction of blood in the streets.  News flash to these dumb asses.  Prohibition doesn’t work.  Restraining availability doesn’t work.  All it does is inconvenience the law abiding and general public.

Fact, not everyone buys alcohol even when it’s available to them.  While some may be more likely to purchase now that wouldn’t otherwise is inconsequential.  Drunk driving is illegal and will still be illegal, drinking under age is and will continue to be illegal.  Just because something is available doesn’t mean that behavior patters are going to change by gross amounts.

If my crusade in gun rights has taught me anything, it’s when you see emotional arguments that side usually doesn’t have solid facts and logic to back it up.  Those screaming about how the passage of I-1183 is going to create an influx of drunk teens and alcoholics are doing nothing more than yelling about how the passage of concealed carry is going to result in blood in the streets.  What this will do is allow me and my wife to more readily be able to entertain friends and family without breaking the bank.  It will allow us to more easily obtain a wider variety of liquor at competitive prices.  Lastly when I discover I’m out of something I don’t have to schedule my shopping trip around the hours of the only liquor store in the area.  Instead I can get what I need at the same time as everything else.*

I do not want the government being my nanny and saying when and where I am allowed to buy alcohol and at what price.  The state should not be in the business of anything, much less in the business of selling liquor.  The main groups against 1183 are against it purely for profit.  The state monopoly has aided them in having profit margins well beyond what the free market would actually support.

*For all you environmentalists out there, you should support it.  Think about all those extra miles driven just to visit the liquor store and all that gas that could be saved.

5 Responses to PSH of Another Kind, Election Edition