Joan Peterson – A response to this video.

[My immediate thought was, “Staying up finishing that last night and all the murphy problems were totally worth it.”  Overall the thread where this quote is found is filled with some of the idiocy that is the anti-rights movement. 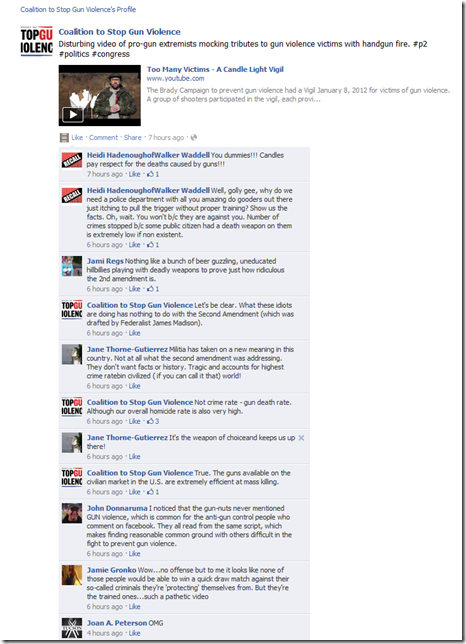 Let’s go through these shall we!?  First up is the two comments from Heidy Waddell.

You’re calling us dumb when you don’t even seem to be able to understand the statement.  Let me break it down so that even a 5 year old could understand it.  A vigil remembers the victims, nothing more.  A vigil does nothing to stop violence.  A candle will not stop violence.  However the Brady Campaign and CSGV are using the remembrance of the victims as a political tool to disarm the law abiding that they would be rendered defenseless.

As for extremely low or non existent defensive gun uses by citizens, you don’t search for the same things on the net as I do.  See here in  the real world we see defensive gun uses regularly, JayG even has a running count.  My parents both had defensive gun uses, but since a single shot wasn’t fired you probably won’t count those.  The instances such as the woman who defended herself from two thugs looking for drugs after her husband died.  There are also plenty of instances of how depending on the police doesn’t work.  Just because you’re willing to die while waiting for someone else to arrive with their gun doesn’t mean the rest of us are as willing.  You have no right to tell someone to be a victim.  I cannot force you to carry, however you have no business forcing someone to be disarmed.

Next Up, Jami Regs.

Really, uneducated hillbillies?  Joe, the last shooter has a BS and MS in Electrical Engineering.  I have a BS in Electrical Engineering. The man in the still frame has at least a BS in Mechanical Engineering.  There was absolutely no alcohol on the range.  I rarely drink and when I do it’s on a special occasion and even then in a very limited amount.  As for the 2nd Amendment being ridiculous, obviously you don’t think that any of those above should have been able to defend themselves.  Again, being a victim is your choice, a choice you do not have the right to force upon others.  I don’t care if everyone else in the country went nuts tomorrow with their guns and shot up different places.  I didn’t so stop trying to tell me I can’t carry or defend myself.

How does what we’re doing not relate to the 2nd Amendment?  We were partaking in a nationally recognized shooting sport.  What part of the language of the 2nd Amendment do you not understand?  We have the right to keep and bear arms.  We were using those arms lawfully and safely.  No one was shot, no one was injured, but according to the CSGV that must mean our arms are defective.

(b) The classes of the militia are—

(1) the organized militia, which consists of the National Guard and the Naval Militia; and

Now that we have that little statement out of the way lets nail your high violent crime rate comment to the wall.  Oh wait, you wanted just the straight crime rate, so in other words you’re inflating your statistics to argue against guns by including crimes where guns weren’t involved?  I have a better idea.  Lets look at the murder rate internationally.  What’s that, the US has a murder rate less than the world average? Less than Mexico which has very strict gun control.  Including “crimes” in which there is no victim to boost your statistics doesn’t really count.  Besides, correlation does not equal causation.  I’ve proven the Brady scores have 0 correlation with violent crime and Linoge has shown that crime rates are not affected by gun ownership either.  Please provide me solid facts on how law abiding gun owners increase violent crime, because all I see is feelings and “if you have a toaster you’re more likely to be attacked by a toaster” arguments.

Thank you for admitting the truth.  CSGV doesn’t care about violent crime, they just care about “gun deaths.”  If all gun deaths were destroyed but the overall crime rate increased, CSGV would be pleased with the outcome.  Joan even admitted that she would prefer a higher crime rate for 0 gun deaths.  In this world 20 murders per 100k is ok if they’re done with a knife, but 5 murders per 100k is bad if one involves a gun.  The dumb is strong with this one.  Besides, the “gun death” statistic is stupid and pointless as it pretends that other forms of death and murder are some how less relevant.

Guns in the civilian market are extremely efficient at armed defense.  The arms available are quite efficient and provide a force multiplier that allows a small petite woman to defend herself from a line backer.

See the response to CSGV’s second comment.  Gun Violence is a BULL SHIT metric.  Why is someone who’s raped at knife point different from someone who was raped at gun point?

Quick Draw Match.  WTF!?  Also I went through the video and pulled the stats and scores.  Incase you missed the stage description:

An explanation of the stage design is important. The brown target in the distance represents a “bad guy”. The white targets represent innocent people. When scored only hits on the bad guy counted and hits on the innocent were heavily penalized. When the scores have been reported I’ll make anther post. I think I might have won this stage. I had a good time with five A-zone hits, one C-zone hit and no hits on the no-shoot targets.

The instructions to the shooter were:

This stage design was to simulate the January 8th 2011 shooting in Tucson. It was this event which the Brady Campaign wanted to bring attention to. This was to stimulate political interest in more gun laws.

Credit for the stage design goes to Bob N. (shown in the video preview above).

So we had a single “bad guy” surrounded by “good guys”.  We had to turn 180 degrees, draw, engage with 6 shots, and not hit any of the friendly targets.  No shooter took beyond 10 seconds from the buzzer to the last shot.  Every shooter scored at least 1 hit in a critical zone.

Joe engaged the whole stage in 4.18 seconds, scoring 5 A hits (critical zone), and 1 Charlie hit to the minor zone.  Joe practices regularly and competes regularly.  He qualifies under your “trained” statement.

I have not been able to shoot pistol however as often as I would like.  The last time I was really able to practice was over a year ago.  I am not proud of that statement, but it is what my finances have allowed.  I had never shot USPSA before and overall my formal defensive pistol training is minimal.  My score for that stage was 6.44 seconds from buzzer to last shot fired.  I put five rounds through the A zone (critical hit) and one shot through the D zone (minor hit).  Where I struck the D ring I glanced the edge of a no shoot, when I say glanced we’re talking less than an 1/8th  went in the white.  It still counted as me hitting a no shoot, however that person would live to see another day had it been real.  All of those no shoots were potential victims had that been a mass shooter.  To put it in further perspective there is a LEO that shot that stage.  He shot it in 7.57 seconds, scored 1 A, 1 C, and 2 to the D zone, there were some unhappy victims too.  I don’t know what you were judging our performances next to, but no one in that stage was really pathetic. The bottom line is, it shows we have the means and capability of stopping a mass shooter.

Extra perspective, the Tuscon shooter fired 33 rounds in approximately 15 seconds.  Add 2 seconds to our times for being completely flat footed.  I have 6 shots on target just after he’s half way through.  Would you rather he continue his murder spree unabated?  Even with an injured civilian, injured is better than dead.  Well in you’re book that’s not true, but frankly I’d rather survive to see my wife again.

The thing about firearms training is it doesn’t take a lot to be good with a firearm, extra practice doesn’t hurt and you’ll improve, but anyone can do it.  You call it pathetic because you are envious of our independence and freedom.

Lastly we have Joan:

I’m glad I could contribute to your pants shitting hysteria.  Again totally worth it!

Also if the video is so horrible, why have 87 people liked it, but only 5 disliked it?