The Minuteman » Concealed Carry » Someone once asked me a question…

Someone once asked me a question…

They saw my XD on my hip and I actually had my mag carriers on and the asked me the following:

Why did you put on your gun to come to the movie theater?  Do you really think something is going to happen?

To which I replied,

I put on my gun because I got dressed and criminals don’t call ahead.

It ends up last night, or early this morning depending on your view, there was an incident in Colorado.

It took no time at all for the gun grabbers to start dancing in blood though.  My personal favorite was the woman on twitter who informed me since no one shot back, we obviously didn’t need to have the right to arms.  Let me start at the beginning, pardon while I synopsize I’ll get to why in a minute.  She posted a tweet yesterday stating how she had physically fought off a rapist and she didn’t need a gun to do so and was glad her attacker didn’t have one.  She then used that statement as a justification for a total ban on firearms. This is how I replied:

<
Here’s the rest of the conversation, remember from the bottom up, I know it’s annoying I can’t figure out a way to change it.

So after the tweets last night I thought the conversation was over.  Well it was until she had some new blood to go dance in as you can see by her comments this morning.

Notice how she called me the ass and implied I was making assumptions but provided absolutely no answers to the questions I asked.  Her solution when I presented arguments she couldn’t handle or respond to was to block me.  All I wanted was for her to justify her position with facts and logic.  Obviously the force is weak with this one.  Especially with this awesome tweet after she blocked me. 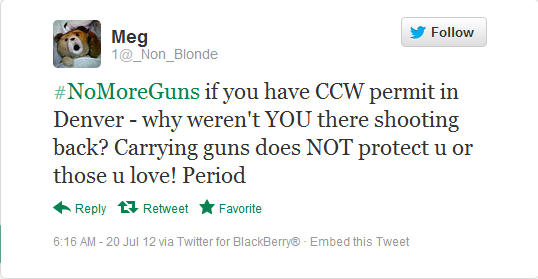 So even with my previous examples of people defending themselves and others, the fact that there wasn’t a CCW holder in the theater means that the right is pointless.  Tell me, why wasn’t there a cop in the theater?  It is not the job of the CCW permited populace to protect everyone else.  Our duty is to ourselves and our families.  If we end up protecting you in the process, that’s a bonus.  If we choose to intervene on your behalf, we could end up being hung out to dry by the legal system so why would we?

Most entertaining though is she says that we’re eating our words this morning.  Except we never claimed that guns were some sort of magic talisman, it’s just that it serves no purpose to disarm the law-abiding but to ensure their victimhood.  She cannot argue against this point and she knows it.  That’s why she hasn’t even attempted to answer any of my questions.

She may have blocked me, but she can’t exactly stop the signal.  Feel free to go tweet at her if you like.  (Do NOT harass her, just try and get her to justify her position.)

Back to the subject of the movie theater, unsurprisingly the media has already gone into PSH mode and have resorted to using the Journalist’s Guide to Firearms Identification. So take this as yet another reminder.  Be careful out there and carry your damn gun, you probably wont know when the wolf comes knocking.
h/t Weer’d

5 Responses to Someone once asked me a question…