The Numbers Say Fight Back and Do Not Worry

So through various posts there has been a smattering of information that honestly should be stitched together so it’s more easily found.

First up is this number which reiterates what many of us in the pro-rights community already knew. 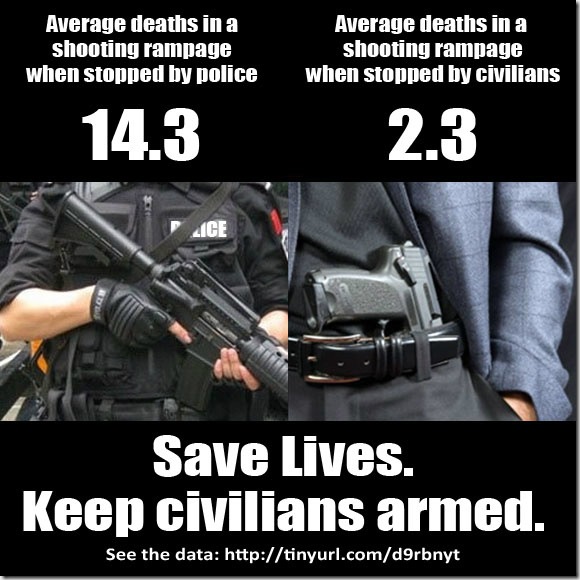 Like Linoge I feel the sample size is a bit on the smaller side but there are a couple of reasons for that.  First he made sure to only include data points that are relevant and applicable.  Second though is better explained by this piece from Chicago Magazine.

This has to be weighed against perceptions of crime which, as Matt Yglesias has written, have in recent years become “unmoored from reality.” Crime has dropped; the perceived rate of crime has not. Is the same possible for rare cases of mass murder? Grant Duwe, research director for the Minnesota Department of corrections and author of (to my knowledge) the only longitudinal book-length study of mass murder in America, suggests it is: “the 1966 massacre committed by Charles Whitman in Austin, Texas marked the onset of a wave of mass public shootings that lasted until the end of the 20th century. Although it may seem that mass public shootings are still on the rise, the data show that 26 occurred between 2000 and 2009, a significant drop from the 43 cases in the 1990s.”

It causes an extra realization that validation needs to be performed on the actual numbers as appearances can be deceiving.  The media blasts about any and every incident because it does well for their ratings as well as a decrease in frequency makes them more news worthy.  (You watch the news not to know what is constant, but what has happened that is unexpected.)  Reporting on a decrease in the frequency doesn’t bring ratings or viewership.

Further someone has examined the odds of dying in a mass shooting.  Unsurprisingly they aren’t high.  Here are the conclusions but I suggest reading the whole thing, it’s definitely worth it.

We should always strive to continue to reduce all risks of death, especially the preventable risks of other humans, wherever possible. But the risks will always exist. If your chance of dying in a mass shooting is 0.000003% and your chance of dying in a car accident is 0.9%, with a whole lot of other risks in between, I think it’s reasonable to ask if there aren’t a lot of easier and more effective ways to try to use the government’s limited resources to save lives than trying even harder to prevent the next shooting tragedy than we already are.

So why is it that mass shootings appear to be such a common occurrence?  The answer is simply visibility.  The media made terrorist attacks look unbelievably common despite the fact that again lightning is a bigger threat to your personal well being.  The media can scream so loud and for so long on the same topic that it often seems like the problem is worse than it actually is.

There are those of us who will take our time, do our research, and find the facts on a topic before moving forward.  Our opponents on the other hand want the media to scream and yell.  The more the media makes this look like a common occurrence, because it makes them look relevant.

Is life, is not safe.  I know that, most everyone knows that.  Frankly I’d rather go out, live and enjoy my life without some nanny trying to control my every action.  Even if they do, I could still be struck by lightning, is congress going to ban lightning?