The Minuteman » Free Speech » On Today

Initially I wasn’t going to put up a post regarding today.  Then I went over to Weer’d’s place and read his post.  I was about to write a comment but instead I realized it was growing into a post.  Here’s what I wrote before I pulled the plug.

I haven’t forgotten, I may or may not put up a post this year.

Yesterday I was embracing the suck and someone was all too unhappy about it. You see our Federal overlords have declared everyone and their mother suspected terrorists for things as innocuous as going about their daily business.  Things such as using cash for a transaction.

I do remember that day.  I remember it quite well.  I remember staring at the TV in disbelief as I watched what was happening live as I prepared to go to school.  I remember the freedom and liberty I had prior to that day.  I also remember hour our government reacted.  They have reacted to the point where they label me with the same title as those monsters.  By god if they’re going to stick me with that title, I am going to embrace the suck and drag the meaning of that word right straight down.

Thanks to the behavior of our modern government, in 2001 terrorists were responsible for that atrocious act.  In 2012, the best that can be said is it was done by evil.  By monsters who despise and hate us.  The title of terrorist no longer fits because according to our overlords, those who fight these monsters are terrorists as well.

Every year on this day I used to be angry at just those who attacked us.  Angry at those who took the lives of so many innocent people.

As the years progressed though I found my anger including others.  While I am still mainly angry at the men who started this snow ball, I am just as angry at the American politicians for exploiting this tragedy for a power grab.  At the same time I am angry because the American people have been complacent with it.

The biggest difference for the majority of America between now and September 10th, 2001 is that we have considerably less freedom now than we did then.  Some would argue that “it was necessary” and it keeps us safe.  The only thing is, it doesn’t do anything to actually make you safe, it just makes a bunch of sheep feel safe. 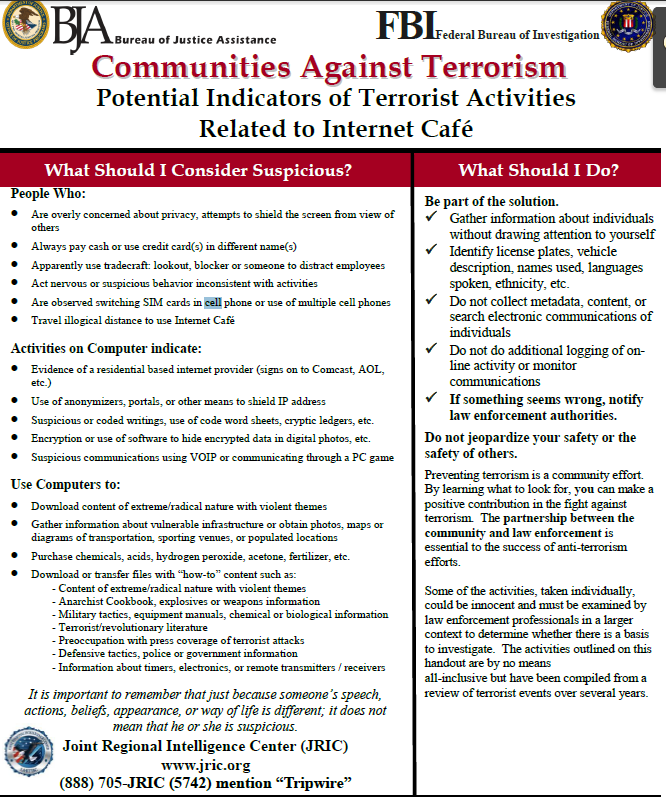 Today is a day of mourning.  Mourning for not only those we lost, but an ideology that is slowly being destroyed, all in the name of the “War on Terrorism.”  Most of the things on the above list are things that I do as well as many of my friends.  Hell, you can go through all the flyers for different types of flyer’s here.

When you start labeling normal behavior as a “potential terrorist action” why don’t you just admit that you think anyone who isn’t just a good little sheep a terrorist that needs to be put down?

I would further like to note, the mere fact I’m willing to voice this dissenting opinion probably gets me labeled a terrorist as well.  See, they don’t outlaw speech anymore, they just tell you what you said makes you either a racist or a terrorist.  Isn’t all this freedom we have nice?  Never mind that the government actually fits the real definition of the word terrorist.

*I think I need to get one of these T-Shirts to wear on September 11th every year from now on.

2 Responses to On Today