So yesterday the “smart gun” meme was fluttering everywhere.  A long debate ensued on twitter. 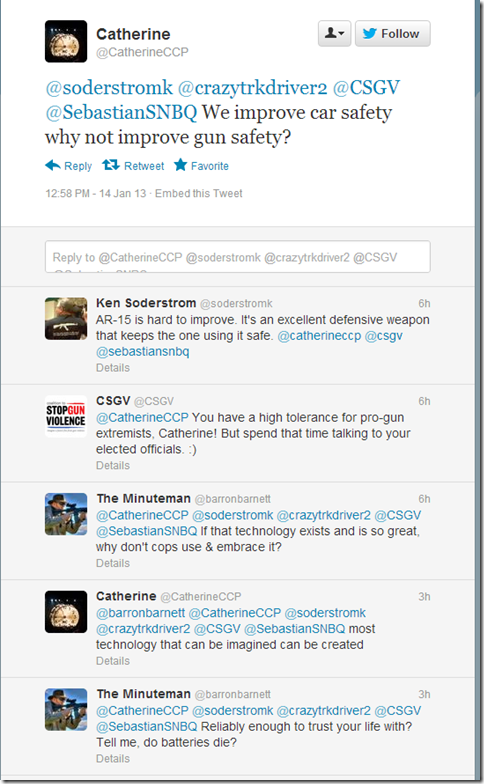 Laugh if you want, but someone needs to figure out how to harness the energy in earthquakes

Seriously. I’m no engineer so I can’t even begin to think about this in real terms, but just imagine if that energy were somehow able to be captured and stored for use.

Go read the post it’s worth it.  So now on to our current problem, “smart guns”.

There is one serious problem with the concept and idea of smart guns, they are doomed to fail from the start.  Period, end of discussion and I will explain.  The whole premise of a firearm is rooted in one simple undeniable fact:

When you pull the trigger it must go bang.  No exceptions.

Now we all realize that no system is 100% reliable though most guns are exceptional in their reliability and quality.  Here is the Glock 17 Gen4 stress test by Pistol Training.com.

That is a failure rate of 0.0168%.  That’s right folks a MTBF (Mean Time Between Failure) of approximately 5947 rounds.  Of note this is a sigma of 1 since we only have the numbers for a single unit of test.  Also of note though is for the most part regarding firearms, this is a must have level of reliability.  For many it is considered a “standard” to meet or exceed.

So now we have a starting point for reliability.  Here’s where we run into a problem.  No matter what you do you cannot improve the reliability, you can only degrade it.

Lets say we could make a device that operated with the same reliability as the firearm but attached to the weapon, what would happen?

We’ve cut our reliability almost exactly in half!  Let me explain.

But again, we are talking about a device who’s sole purpose is to go bang when you pull the trigger.  A device that must be reliable because the failure of the weapon can result in the loss of life for the operator.

The biggest is ease of use.  You know why police and the general public like Glocks?   Because they are unbelievably simple to operate and maintain.  Any additional safety will increase the complexity of operation, period.  There will be required to be some sort of user interaction with the device.  Say it’s a palm print scanner?  What happens if during a hasty draw you don’t get a solid grip on your weapon?  Normally this wouldn’t matter, it would just be more uncomfortable during recoil.  This safety will fail, it cannot properly identify the user and as it’s design is to prevent the weapon from going bang, it will do it’s job.  Biometrics are unreliable as it is and have been extensively in the realm of high end research for a while.  How does this magically change overnight?

Next up, battery life.  The system will have to be running 24/7 365, actively scanning and giving a pass/fail return to the firing mechanism.  Some could say, “well just use a pressure switch.” Except the level of processing required and initialization lets say you get that down to a half second.  That’s an extra half second before your first shot, it didn’t go bang when you wanted it to.

Don’t forget tin whiskers, humidity, temperature, SEU, electromechanical components failing due to the shock, and I could continue down the list.  The idea you could match the same reliability as a mechanical device is laughable but I used it here because it’s the best possible outcome.

This is why we don’t see the military or law enforcement pursing these types of technologies.  Think about it, Law Enforcement should be all over funding and pushing manufacturers to develop this as a reliable technology.  It is the perfect solution to weapons retention and preventing a criminal from taking an officers duty weapon during a scuffle.

Yet no one does it?  The answer is said plainly above, reliability.  The firearm has one critical function, that is to go bang when told to by the operator.  Anything that is designed to interfere with that function is a massive risk and will increase the probability of failure.  In the event of failure the death of the operator is quite possibly going to occur.  Especially since you pointed a firearm at someone, you have indicated willingness to use lethal force.

So tell me again how science fiction will solve the issues of the real world?  Further comparing safety features on cars to guns is a non-starter.  The reason is simple, no safety features are allowed to conflict with the primary inputs from the driver.  Any feature that might possibly interfere is placed in parallel and designed to fail open.  For example, ABS cannot operate on it’s own, it must occur with a brake signal.  In the event of an ABS system failure, the brakes will still work, but can lock up.

Now it is true that there are features now such as emergency brakes that will improve reaction time.  It is also of note in those vehicles you can override the system again cutting it from the loop.  There are extensive diagnostics testing that system specifically to remove it from the loop in the event of failure.  Why? Because slamming your brakes on the freeway at 60 MPH in the middle of traffic is bad and a liability for the manufacturer and engineer.

Tell me, given the above information, how can you create a gun that will still fire when the safety fails if the safety’s sole job is to keep the gun from firing.  If that’s the case, anyone could just disable the safety so what’s the point?

As an engineer my job is to make things, safer and reliable.  I would refuse to work on a project relating to a “smart gun” because honestly it can not accomplish either of those two things.  Safer in this case applies to the operator, not the target.  When the operator pulls the trigger it must go bang it’s what’s safest for the operator.

In closing if this is such a reliable and fantastic idea, why has it never been implemented anywhere else with extensive reliability?  We do not even see biometric identification in cars?  It would be of no where the inconvenience to have to swipe your thumb again to get your car to start as your firearm not going bang when you need it to.  You would have much more space for the processing equipment, less requirements for shock, overall it’s a better more likely environment, yet we don’t see it implemented.

The idea of smart guns is purely science fiction and that is not going to change any time soon.