The Minuteman » Free Speech » In Which A Republican Betrays Us

In Which A Republican Betrays Us

So I mentioned previously something about a protest last Saturday night.  Well we turned out because the president of the Moscow city council has thrown gun owners under the bus.

Enforcement of existing regulations is crucial, but gaps and loopholes pertaining to the sale, trade, and possession of illegal guns and ammunition also need to be closed.  Law enforcement officials here recommend consideration of:

Among many other calls for infringements and attacks on an inalienable right.

This provoked a response from those who live in the community, especially since the Latah County GOP Lincoln Dinner was going to be held last Saturday.  Can you guess what my buddy Jefferson organized?

If you said a protest outside the building the dinner was being held in, you would be right. 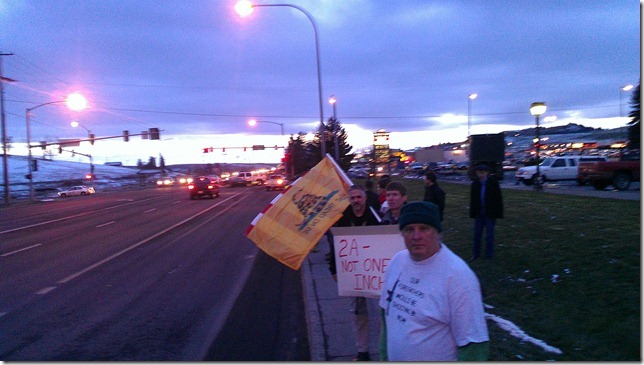 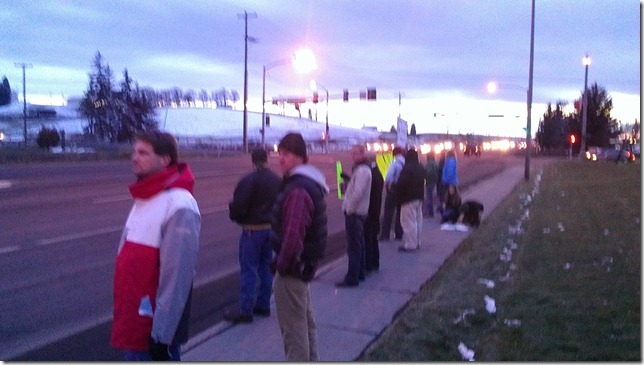 These were the pictures I took before an additional group of miscreants spread the line down the sidewalk towards the intersection.  Overall I estimate the turn out probably about 30-35 at the peak and given there was only about 48 hours notice I don’t think that’s too bad.  Especially given the fact that the protest started at 1700 and it was about 32 degrees.  It ended at 2000 and it was much colder.

The night was filled with humor including a Canadian who seems to hate America and stated so by yelling “F*** America.”  I don’t think he expected an immediately reply before he finished of “F*** You.”  While one would claim my response was unnecessary as he was driving a Honda Element, it was worth it as he almost hit a car, cut another one off, and barely missed a light pole which all happened immediately after the response.

I do my best to remain civil and will remain civil as long as you return that respect to me.  While some would argue about being the better man, many of these people prey upon the fact of expecting no response.  Remember, many of these liberals are very violent and expect us to withhold our opinions in an effort as not to offend.

Screw that.   I restrained myself when I made my sign. 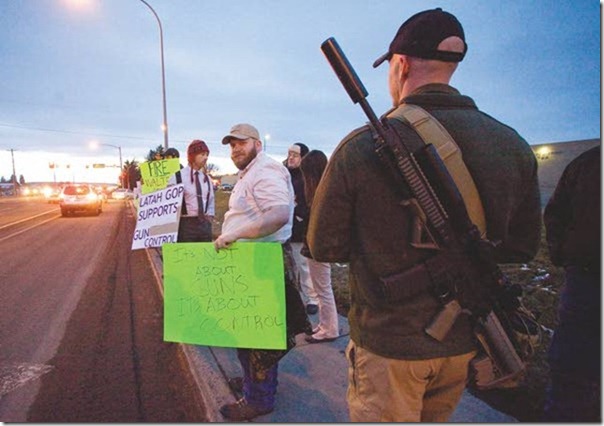 You know what I really wanted to write for my sign?

Why do I need a 30 round magazine?

Again I agree with Uncle and that’s why I didn’t do it… as much as I really wanted to.

I am a bit disappointed because my friend to the right didn’t let me know he was bringing his carbine otherwise I would have brought mine.  I didn’t want to be the only guy open carrying a carbine because honestly that’s a great way to end up in trouble.  It is worth noting I was standing next to a lawyer, but I’d rather not need one.  There is strength in numbers, especially at a political rally.  Further it ended up when I got there the Moscow PD had sent an email asking people not to open carry… given Idaho is an open carry state that would have made me want to just on principal.

Now some would also argue that carrying a carbine with a real can isn’t worth it.  I can tell you it was.  More than once I grabbed my buddies chest to turn him so it was right there as some little old lady looked like she was going to have a heart attack.

The majority of the people driving by honked in support.  There were a few hecklers such as the Canadian, though we did love the fuel truck that blew his air horn the whole way past us.  The best part of all the honking, we know they could hear it inside at the dinner.

The most entertaining part of the night though was the fact that the protest probably caused a divorce, either that or it was the last date.  A couple pulled up in a minivan and the driver gave us a thumbs up.  The woman was shaking her head and obviously said something negative.  He replied in the positive, she flipped us the bird at which point the light turned green and they drove off obviously in an argument.

We ended up on the front page of the local paper, sadly the print version used the guy who couldn’t spell inalienable, i before e except after c…  Overall though I think the protest was definitely worth it and hopefully we can finally get that tyrant Walter Steed out of office.

4 Responses to In Which A Republican Betrays Us