The Minuteman » Gun Rights » Our own worst enemies

Our own worst enemies

Seriously folks, we are our own worst enemies. 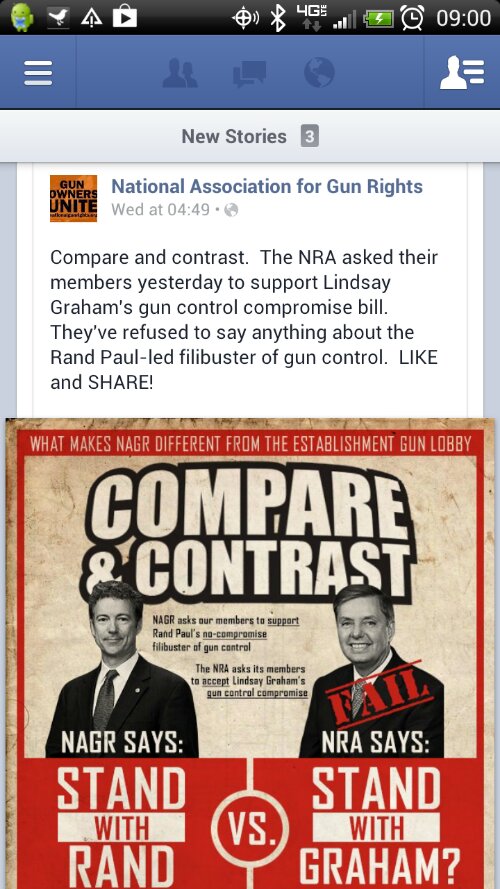 Pardon my straight face but I spent this morning searching for where the NRA is supporting the compromise.  Seriously  I went through all the NRA-ILA feed again trying to find it.  Tried to find it using Google.  Lastly I sent an email to Sebastian asking him to confirm this stance if possible.

I did find this which I am reposting in full just to illustrate the sheer “WTFO!?” moment I had when I saw the above image on Facebook.

I am writing regarding the National Rifle Association’s position on several firearms-related proposals under consideration in the Senate.

S. 649, the “Safe Communities, Safe Schools Act of 2013”, introduced on March 21, contains a number of provisions that would unfairly infringe upon the Second Amendment rights of law-abiding gun owners.  This legislation would criminalize the private transfer of firearms by honest citizens, requiring friends, neighbors and many family members to get government permission to exercise a fundamental right or face prosecution. The NRA is unequivocally opposed to S. 649.

In addition, the NRA will oppose any amendments offered to S. 649 that restrict fundamental Second Amendment freedoms; including, but not limited to, proposals that would ban commonly and lawfully owned firearms and magazines or criminalize the private transfer of firearms through an expansion of background checks.  This includes the misguided “compromise” proposal drafted by Senators Joe Manchin, Pat Toomey and Chuck Schumer.  As we have noted previously, expanding background checks, at gun shows or elsewhere, will not reduce violent crime or keep our kids safe in their schools.  Given the importance of these issues, votes on all anti-gun amendments or proposals will be considered in NRA’s future candidate evaluations.

Rather than focus its efforts on restricting the rights of America’s 100 million law-abiding gun owners, there are things Congress can do to fix our broken mental health system; increase prosecutions of violent criminals; and make our schools safer.  During consideration of S. 649, should one or more amendments be offered that adequately address these important issues while protecting the fundamental rights of law-abiding gun owners, the NRA will offer our enthusiastic support and consider those votes in our future candidate evaluations as well.

We hope the Senate will replace the current provisions of S. 649 with language that is properly focused on addressing mental health inadequacies; prosecuting violent criminals; and keeping our kids safe in their schools.  Should it fail to do so, the NRA will make an exception to our standard policy of not “scoring” procedural votes and strongly oppose a cloture motion to move to final passage of S. 649.

Tell me, where in that letter does it say the NRA is accepting the “compromise”?  An hour ago the NRA-ILA feed was posting information about the possible filibuster from Paul and the other Republicans.

There was another comment from the NRA-ILA as well, found via Sabastian.

Expanding background checks at gun shows will not prevent the next shooting, will not solve violent crime and will not keep our kids safe in schools. While the overwhelming rejection of President Obama and Mayor Bloomberg’s “universal” background check agenda is a positive development, we have a broken mental health system that is not going to be fixed with more background checks at gun shows. The sad truth is that no background check would have prevented the tragedies in Newtown, Aurora or Tucson. We need a serious and meaningful solution that addresses crime in cities like Chicago, addresses mental health deficiencies, while at the same time protecting the rights of those of us who are not a danger to anyone. President Obama should be as committed to dealing with the gang problem that is tormenting honest people in his hometown as he is to blaming law-abiding gun owners for the acts of psychopathic murderers.

That isn’t a statement to accept it, it’s a statement of, if you’re serious about fixing “the problem” then actually do so!

Why do we need to drive a wedge between gun owners for particular groups?  More specifically why do some people feel the need to spread lies and falsehoods to vilify those who are on the same side?  What service does that do other than damage those who support you?

Seriously folks, don’t believe everything you see, especially on Facebook and even the blogs.  Not everyone spends time and effort trying to confirm or disprove the facts.  Just because it has a thousand likes, or has been shared hundreds of times doesn’t make it true.

Update from Sebastian: The Graham Bill clarified mental adjudication and is perceived,  at least by him, it was an attempt to get Dems to bite on something.  When it comes to vote vs. filibuster, since the NRA will be scoring cloture on S. 649, they would like to put some of these folks on record to hang them in 2014 and 2016.  NAGR is merely criticizing because they don’t have the risks or ability to decide strategically what happens in this fight.

*My comments on the email I got from Sebastian.  It makes sense but I have NOT found anything to confirm that the NRA is against the filibuster either.  Honestly I think this was just a big fat troll to drive a wedge.

One Response to Our own worst enemies