“Simply stated, ‘gun control’ could not exist without an accompanying sea of disinformation.”

So I joined Forest River Forums recently after I bought a fifth wheel with the kiddo in mind and Boomershoot. You can encounter all 4 seasons in the weekend and many times 3 of them in one day with a rapid swing. It’s often cold and windy and well a 7 month old kid in that environment isn’t going to be fun. 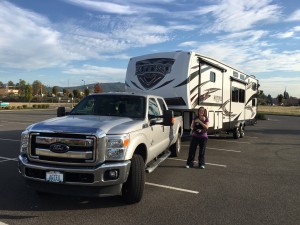 TMW and Minnie Me with the new Fifth Wheel

So thought, get a bug out vehicle that we can use elsewhere. Well I’m new to the RV thing so I begin doing what I do and started sucking up every last piece of information on the topic and finding locations that would be helpful for future reference.

I joined Forest River Forums for the following reasons:

That seems like a great way to narrow down noise when dealing with a problem or issue. So I do the one thing I never do and join a forum. Yeah we will see why I hate forums here shortly. I joined shortly after pulling the trigger October 4th.

Come November 10th, I was given this garbage in my inbox. 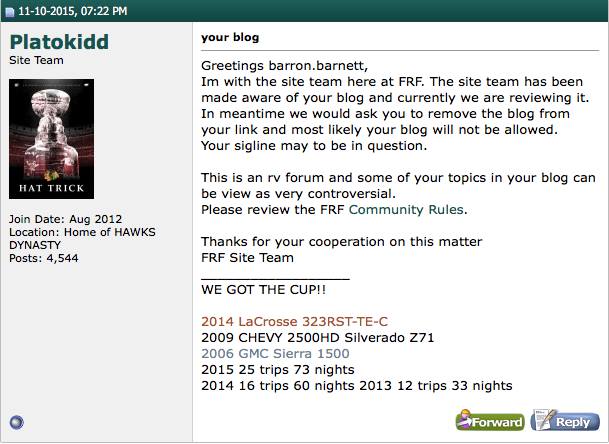 PM I got from a busy body.

So I don’t remember what I had in my signature. Most likely it was either this quote from Franklin:

Those who would give up essential Liberty, to purchase a little temporary Safety, deserve neither Liberty nor Safety.

Or this one from Captain America:

When the ob and the press and the whole world tell you to move, your job is to plant yourself like a tree beside the river of Truth and tell the whole world, you move.

Don’t remember, I was off Forest River Forums for a while and didn’t notice that PM until December 22nd. Well after seeing the message and then noticing my sig is different, I was less than pleased. Petty tyrants gotta tyrant. This is their forum and they can do whatever they want.

This is my blog and well they decided to be so fucking petty I have no need to hide any of this anymore instead feel it better to lay out the facts of exactly what transpired.  I fired off a curt reply.

So I just noticed this PM tonight. Since you seem to be this type of individual, here’s your trigger warning.

First, let me say this is your site and you’re free to do whatever the hell you want. I find it interesting though that I must censor the link to my blog though in the about me page. I can understand limiting commentary in sig lines, but if someone looks me up so what? They’re free to leave my website, just as I’m free to skip over threads I don’t care about.

If they want to get their panties in a ruffle well I’m not going to be the one to do it in a public forum. However while I understand your concern about someone not expressing such restraint you feel it necessary to restrain me. Petty tyrants gotta tyrant.

But here’s one for you. You want to be a resource for RVer’s and traveling with firearms can be a long legal nightmare. But we can’t have people asking questions about how to do that now can we? Because CONTROVERSY! We can’t have someone discover from looking in someone’s profile that they might be able to answer the question outside of the forum whereby the forum escapes their inclusion in a dreaded “controversial” subject.

We’re talking about the link to my blog as provided in my profile on the about me page. We can’t have someone discover from looking in someone’s profile that they might be able to answer the question outside of the forum whereby the forum escapes their inclusion in a dreaded “controversial” subject. You have quite literally said now I’m not welcome because “I am controversial” merely by my presence and who I am outside of this forum. Because that is my personal website. If you don’t like the fact that someone might have something controversial in their about me profiles, delete the url for everyone. Make it your safe space.

I’d like to point out there wasn’t a lick of controversy or issue until you created one. So with that, so long. I’d rather be some place where I feel welcome and not have to suppress my profile about who I am.

Additionally, I find it ironic that you bitch about my blog when I’ve had a couple people contact me after surfing through the forums. They contacted me to ask me RVing questions and didn’t want to join the forum, largely because of limited scope and it was regarding my specific rig and configuration, coupled with the fact they dislike forums. We’ll we see why, not to mention for a supposed resource to help people you seem more than happy to kill off some of the ways it helps.

I thought long and hard before joining this forum because honestly, I find most forums an absolute waste because petty shit drives out people who would be good contributors. I can see now that deep down this place is no exception.

TL;DR: Go fuck yourself you petty, hypocritical, tyrants. I’m out, I don’t need you or your generation of drama because of a fucking link to my blog contained within my profile. You either welcome me or you don’t. If someone else wants to get pissy because of who I am outside of this site, that’s their fucking problem; NOT MINE.

In hindsight I noticed a copy paste reorder issue but it still works. After that I didn’t goto Forest River Forums.

Yesterday I searched for something and without looking clicked the link and this greeted me.

And I’ve been banned.

How’s that for awesome right? Petty tyrant shows himself as a petty tyrant wielding the only hammer he’s got. But wait, it gets better. After seeing I am now banned, indefinitely, I decided to check my profile info. Lets look at my contact page.

Look, my URL is still there…

So lets ignore the signature thing, because honestly while it’s annoying it’s not the serious transgression here. The transgression here is that the contact info for me regarding my homepage was an “issue”. Most entertainingly you then see this below: 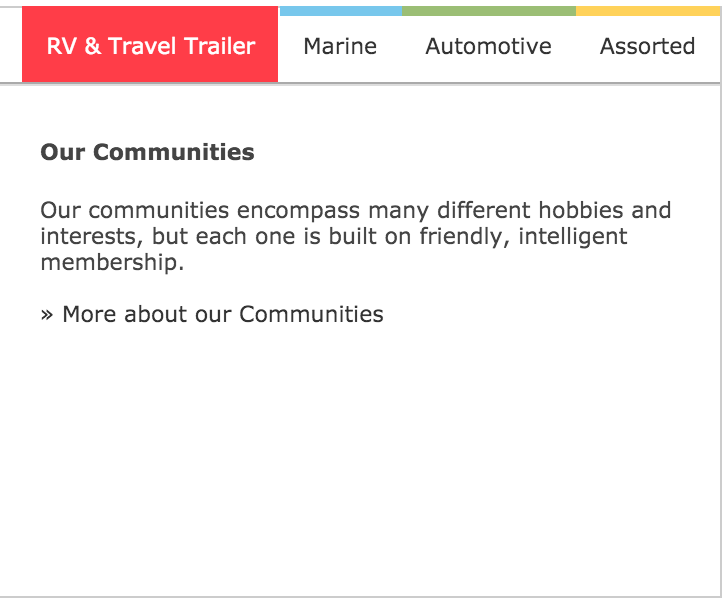 Only the hobbies you approve of.

So it appears that my polite behavior within the forum not to mention my intelligence regarding some of the subjects didn’t matter because my hobbies and interests didn’t align with their world view.

I know for a fact at most two moderators were involved with my ban, you can see only two reviewed my profile, and most likely it was this single moderator who had his panties in a bunch because how dare you have a hobby I disagree with.

Want the icing on the cake though? I have had people contact me through my profile page looking for answers to questions. They were looking at getting a similar trailer and didn’t want to join Forest River Forums. Smart decision that, petty tyrant has to tyrant and it’s best just to avoid their drama.

What’s entertaining is they trotted all this out and for what? A link to my personal blog about what I do outside of my RV and outside Forest River Forums. They cannot actually damage me or even really prevent me from reading the forum. It’s easy to delete cookies, change IP addresses, and any host of other things. Hell, I could create another profile right now and be back on and they wouldn’t know who it is. In other words, you can’t actually stop me, all you can be is a nuisance. It’s merely my ethical and moral stance that keeps me from burning your house down with the lemon.

Anyone involved in this shit show is free to contact me through the contact page or to leave a comment while comments are open. Note unlike a petty tyrant, it takes a lot for me to swing the ban hammer, even in a public space, and I’ll be leaving what you write for the world to see.

This post could be alternatively titled, why Forest River Forums sucks and you shouldn’t waste your time.

Specifically, UK ministers want to make it a criminal offence for tech firms to warn users of requests for access to their communication data made by security organizations such as MI5, MI6 and GCHQ (the Government Communications Headquarters).

[Coming soon to a country near you…

This right here is a classic case of “it’s fine when we do it and illegal when anyone else does it.” Seriously, you’re required to notify users of a breach of security regarding their accounts, not to mention it’s the morally correct thing to do. Yet somehow all those rules go right out the window merely because it’s a government agency who’s getting into the account.

You want indemnity to prevent disclosure. Simple, get a real honest to god warrant, not to mention the death to the secret courts. Nothing aids abuse better than these types of shenanigans. -B]

To regulate assault weapons, to ensure that the right to keep and bear arms is not unlimited, and for other purposes.

[Let me quote one thing first.

A well regulated Militia, being necessary to the security of a free State, the right of the people to keep and bear Arms, shall not be infringed.

What is so fucking hard to understand about that? Let me be clear, since evidently Heller and McDonald were too complicated for these simpletons.

Let me save you reading that entire slop and give you the few lines that matter:

(1) It shall be unlawful for a person to import, sell, manufacture, transfer, or possess, in or affecting interstate or foreign commerce, a semiautomatic assault weapon.

With a definition broad enough to encompass everything but bolt action rifles. While it exempts things manufactured prior to the date it won’t be long for that tune to change. Don’t let anyone ever tell you they don’t want to take your guns.

I have one phrase to cover this, Molon Labe. If the shooting starts, every person who put his name on that bill has declared themselves my enemy. They are willing to kill me and my family when I have done nothing to them. I’m sick of this shit. I’m sick of being abused. I’m sick of being blamed. You want to penalize me for shit I haven’t done, well let me introduce you to the concept of earning the penalty. When the first house’s door is kicked in, the war will not be with the police. It will be with the politicians who sent them there. -B]

But TMM, that’s a cover of AC/DC, that’s sacrilege.

That son is Lzzy Hale, don’t give a shit cause she’s that awesome.

Lost the political debate. Social media has made the debate on guns worse. For the anti-civil rights crowd. Look, Sparky, it’s working just fine. The good guys keep winning the gun debate exactly due to the internet.

Say Uncle – What a lack of educated grass roots has done
December 18th, 2015

[When your only methods of argument are to lie and provide disinformation, of course when information can more easily flow you’re going to lose the debate. In the immortal words, “You can’t stop the signal.”

The issue is they cannot hijack and control the narrative on the internet. Despite what they may think, that’s a feature, not a bug. -B]