It is possible to commit no mistakes and still lose. That is not a weakness, that is life.

[There are a large number of people who insist on life being fair. The fact of the matter is the above is the reality of the matter. Accept it, prepare for it, you’ll be in a much better position if you do. -B]

[It’s amazing the number of people who do not know, understand, or forget: the gun is civilization. -B]

I see a whole lot of venom sprayed in my direction, like my exercise of my Second Amendment rights has anything to do with mass murders.

Do they not realize that there are about 100 million firearms owners in America and many more who agree with the right to keep and bear arms? Are we all somehow culpable per their twisted criteria? That is really a stretch. I have equal validity to tell them that since they drink alcohol and drive cars that they are responsible for the most hideous drunk driving accidents. Just silly.

The violence they wish upon us and the likely bloody results of confiscation attempts shows they are the blood thirsty ones. We simply want to be left alone, but their hoplophobia demands that they attack us. Again, they are pathetic.

Bernie Sanders tweets, “At the end of the day, providing a path to go to college is a helluva lot cheaper than putting people on a path to jail.”

I wonder sometimes, if the best way to question the increasingly dangerous idea that a college education is the best path for the most people, is to stop fighting the sentiment directly, and simply shine a light on the knuckleheads who continue to perpetuate this nonsense. This latest tweet from Bernie Sanders is a prime example. In less than 140 characters, he’s managed to imply that a path to prison is the most likely alternative to a path to college. Pardon my acronym, but…WTF!?

[Oh the commentary and hate in response to Mike’s post would be hilarious if it wasn’t for the reminder these people are so attached they believe it. Mike points out, and rightfully so, that the idea if you don’t go to college your other choice is prison is bullshit.

You have a large number of people who have become emotionally invested in their political candidate and they take it personally. Quite like if someone made fun of their sports ball team. Because if a political candidate says something that sounds good, it must be accurate and true.

Look, college isn’t for everyone. The prices are inflated due to the federal loan programs so the answer is to offer more?  Look it wasn’t 80 grand spent over two bachelors of science degrees that landed my wife a job. It was a 500 dollar vocational course for a CNA that finally got my wife work.  I’ve gone into detailed depth before about the economics, and it’s only gotten worse since I wrote it.

Education is an investment and people are investing poorly. I do not want to be forced at the point of a gun to keep supporting this bullshit system.

But TMM, you went to college! Yes I did and lets actually evaluate what it got me other than 80-100K out of my pocket. Most every material piece of information I gained via college I could get freely with a trip to my public library, or now with the advent of Google and the Open Courseware initiative sitting at home in front of a computer.  While I admit not all have the drive to do this solo, the fact is if you actually are in it for the education you don’t need to spend thousands of dollars on something you can get for a couple bucks. Now the problem is, how do you prove you’ve absorbed the material, this is changing as well. MIT is offering credits if you complete some of their Open Classes, additionally it’s making a space for certification companies.

You have Cisco certification regarding network design, architecture, and administration. Why not something like that for software or other industries? The point is the mode of education is outdated. Most of what I had to do for my degree was “rounding” and that was all politically correct indoctrination. Don’t try and sell me it wasn’t because “disabilities and society” was bull shit, doubly so as someone who lived in wheel chair for a while. My wife hated the class as much as I did and she’s got nerve damage. We were graded down because we didn’t agree with the professors. It was a game of repeat the bullshit, even if our argument was valid and supported. If you cut out the bullshit like that, I could have done my degree in half the time at a more reasonable course load. What do I mean by a more reasonable load, I averaged 5 to 6 classes a semester, where most averaged 3 to 4. Are some classes required for rounding, sure, history, literature. But the volume of “rounding” was over the top and didn’t even directly correlate to things that do round someone, they were classes in political correctness.

For example I graduated with 152 credits, minimum for EE is 145, for the school it is 120. They actually derated core classes related to my degree in credit value because they had so much extra garbage I had to take. Most other degrees were between 120-130 credits. So I had a full extra year of school by the time I graduated, most was for “rounding”.

But TMM, what about networking. You met all those people and that was a big help. I met a decent number of people and it was a help, except I can tell you exactly who my biggest network source while I was in college and I didn’t have to goto college to meet him. I knew him since I was a child when he and my dad worked together. First job was working for him and it was him that brought me to other opportunities. He was my mentor, and while I did end up taking classes from him, I learned way more working for him as an intern. I made way more in terms of professional contacts and networking working for him as an intern and the jobs that followed along later.

You know what college really got me? A sheet of paper that says I learned something about some subject. That’s it. I’ve worked with plenty of people, even in the software industry, who didn’t have a college degree. They were just as capable, if not more so than me. The degree didn’t magically make them who they are or enable them to accomplish their goals. As a matter of fact, one of my coworkers is a highly respected and known game programmer who didn’t graduate from College and if he had stayed it probably would have destroyed him. It was NOT the environment for him. Yet he isn’t in prison. No instead he gets royalties off of Age of Empires and tons of other games I spent my childhood playing and has worked for heavy hitters such as Valve.

I have friends who are also in blue-collar work making the same if not more than what I do. They work their ass off and they get paid for it, they didn’t goto college and didn’t need to. Seriously, who’s smarter, the guy who spent 80-100k to make 90K a year after school, or the guy who spent nothing and got trained vocationally by his company and is making 150k a year?

Now after years of experience that college grad may match the vocational employee, however at the same time the vocational employee will also increase his value. The point is, different strokes for different folks. And if you think making college free is going to solve the educational system problems, I have some ocean front property for sale in Arizona. It’s a basic economics problem and well making it free isn’t going to stop price inflation, it’s just going to pass the bill to someone else and they get to suffer for the poor investments instead of the person who made the poor choice.

Lastly don’t try to sell me a pile of bullshit under a false dichotomy.  -B]

[Question by : If I buy a gun on the internet is it delivered to my home?]

I assume it is shipped to you but I don’t know for sure actually.

James Comey – Director of the FBI

[The top law enforcement officer in the country doesn’t know the answer to this. An answer which was clearly defined in the Gun Control Act of 1968. If you buy a firearm online it must be shipped from an FFL to another FFL. If it’s a pistol, the receiving FFL where you pick it up must also be located in your state of residence. Additionally all firearms laws still apply.

Pro-tip, not just for idiots like Comey, if you don’t know the answer to a question there is only one proper answer: “I do not know currently, let me find out and I’ll get back to you.”

The media, not to mention the uneducated though, lap it up. Seriously I wish I had been a senator on that hearing so I could have publicly roasted his ass for that line of bullshit. -B]

Hey, I don’t blame all Democrats for the Klan, or putting 110,000 Japanese in concentration camps, or for Tipper Gore wanting to censor rock music, or for getting us involved in Korea and Vietnam, or for the Bay of Pigs, or for Fred Phelps, or for Lyndon Larouche, or for repealing the caps on interest rates, or for selling our jobs overseas to China, or for the majority of domestic terror attacks Dems committed in the last two decades.

The irony is that they can’t see the other side.

[The projection is quite strong with these people. For full context, here’s the comic that spurred his quote. 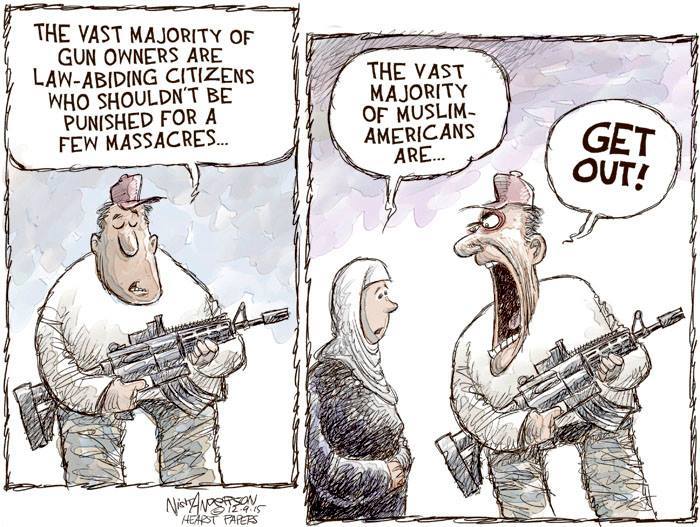 It’s the classic problem of again judging a whole group by the actions of a few while again saying we shouldn’t do that. If this irony was butter it would be so thick it would be like steel. -B]

Our constitution could not be written today… and if by some miracle it were, it would never be ratified. It is too simple, and too radical.

It was radical then, it is still radical now. It was and is intentionally so. It created a nation, and a government, based on a principle that had never been tried before, and I don’t believe has been tried since.

Those who “misinterpret” it, do so intentionally, because they do not understand, or cannot accept, the notion of a government of strictly limited and enumerated powers, and a people of nearly unlimited, inherent, pre-existing, individual rights.

And so, they dismiss the “inconvenient” language, as if it was meaningless, and twist it to fit whatever interpretation they find desirable.

They simply pretend the entire basis of the constitution, from which it solely derives its legitimacy and authority, does not exist at all.

That somehow, the “real” basis is some mishmash of communitarianism, authoritarianism, and majoritarianism, which can be altered and reinterpreted to suit the whims of “society”, as they see fit.