If you’re unaware of the Streisand Effect, please educate yourself before reading further.

This isn’t a full blown drama llama, but we’ll call it a baby drama llama*. 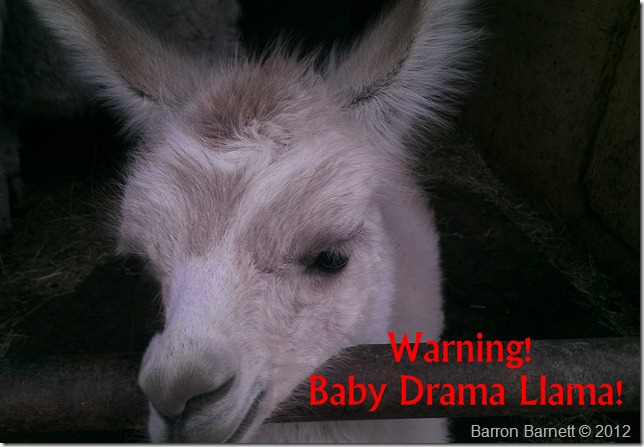 So for those unaware, some idiot lawyer went and demanded money from The Oatmeal because The Oatmeal pointed out in a blog post that his client was stealing copyrighted material.  The Oatmeal replied in classic Oatmeal fashion.  You can also read a legal synopsis and prediction from the opening shots here.

Then FunkyJunk’s lawyer, a supposed whiz with things related the internet acted surprised at the response.  Charles Carreon then continued to flap his wings faster and with such ferocity that a hummingbird would not know how to keep up.  Though as of last Friday I figured the weekend would swallow him whole and that would be the end of his 15 minutes of fame caused by his stupidity.

I was wrong.  It appears that attempting to shutdown a collection for two non-profits wasn’t enough.  He now intents to force them to waste funds in frivolous litigation.  There’s a term to describe individuals who do things such as that, I believe it begins with a D and ends with a K.

Seriously, in what world where you commit numerous public relation disasters at the beginning is it a good idea to file lawsuits against two non-profits?  It is not a non-profits job to filter who and who does not raise funds on their behalf.  If I say I’m raising money for Soldiers’ Angels, that is me telling you where I’m sending the funds, that is not an endorsement by the non-profit.

So Charles Carreon feels it’s a good idea to sue the American Cancer Society and the National Wildlife Federation and then wonders why the internet has reacted the way it has.  Well, he’s wondering because he’s a clueless moron that wouldn’t know how the internet actually worked if all it was is two cups with a string in-between.

If Mr. Carreon feels that people are dehumanizing him, maybe it’s because those people don’t feel he’s actually human.  I think he’s a giant troll who bullies people and organizations with frivolous litigation without thought for the effect it will have on his fellow man.  His only thoughts are focused on how he can get people to stop pointing out how he’s an idiot.

If he hadn’t done anything this whole incident would have faded into obscurity but instead he doubled down on stupid.  Heck even after the response from the The Oatmeal just shutting up would have worked in his favor in allowing it to quickly blow over.

So in closing, Charles Carreon, you sir are a giant STD encrusted dick.  You’re actions and frivolous threats at the beginning were bad enough.  Now though you have proved your dickishness to the world by attacking two charities, one who’s sole goal is to the betterment and health of your fellow man.  Yeah, you’re not human, you’re a big fat dick.  Thank you for playing.

No I will not take this down because legally this is acceptable under the first amendment much to your dismay and displeasure.  I have provided facts and evidence to support my position, you and your legal threats amount to you throwing a tantrum like a 4 year old in a supermarket.  Grow up and act your age you spoiled rotten brat.  Besides the way to make stuff like this not happen to you is actually quite simple.  Don’t be a dick!

*I got pictures of llamas over the weekend and I need to use them so they get into the wild.