In this part of the series I’m going to cover the basics of AC machinery.  More specifically I’m going to focus on synchronous machines, both in motor and generation aspects.  Synchronous generation is important since that is the production method used by most major power plants, from steam to hydro.  Why it’s used with be made more apparent at the end.

If you’ve ever played with magnets you know that two magnets will try to turn to line up with one another.  In an AC machine that behavior is leveraged to cause the rotor (the rotating part of the machine) to chase proper alignment with the stator (the stationary part of the machine). 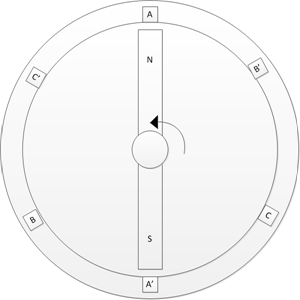 In the diagram current flows in the standard letter and out the prime, for example in A and out A’.  The math and details behind the magnetic forces and how it works as a motor isn’t going to be covered in detail.  The only understanding needed is that as a particular pole passes a wire it induces a current in a particular direction, the opposite pole causes current to flow in the opposite direction.  AC current switches direction constantly throughout it’s supply, this is because the poles on the magnet have switched direction for the other half of the cycle.

The above example is a “2 pole” system displayed by the fact there are only two magnetic poles in use.  The mechanical rotational speed is directly tied to the electrical frequency.  This relationship is described by the following equation:

Which states that the electrical frequency in Hertz is the product of the speed of mechanical rotation in RPM and the number of poles in the rotor, divided by 120. 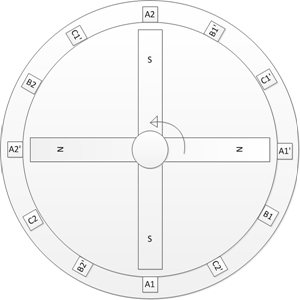 The windings when wired together correctly produce a standard 60Hz signal.  The reason you would do this is it allows you to operate at a much lower mechanical frequency.  For instance the 4 pole system above would operate at 1800 RPM instead of the 3600 RPM of the two pole system.

No system is 100% efficient, thermodynamics guarantees this since we are converting energy from one form into another.  You have numerous losses that are caused by the following items:

Synchronous generators are so popular for generation because their design lends them to be considerably more efficient than any other design for generation.

Synchronous machines are like what was described above, however their rotor contains a set of windings that are energized by a DC current.  IE they use an electro magnet to provide the magnetic field that the rotor uses to generate current in the stator windings.  These two sets of windings are referred to as field windings and armature windings.  Armature windings also referred to as stator windings is where the main voltage is induced, while the field windings produce the main magnetic field within the machine.

This DC current supplied to the field windings can be supplied by an external source through the use of slip rings and brushes, or it can be generated directly on the shaft of the machine.

Synchronous machines are a very special type of motor as they are locked to the frequency of operation.  When starting a machine you synchronize it to the power system prior closing the circuit. Once locked with the power system it’s frequency is stabilized by the rest of the system.  In order to shift the frequency, it has to shift at ALL the machines, not just that one.  Prior to the machine being actually turned on though you must spin the machine up to speed by external means.

For instance say you were using the machine as a motor, you could NOT just supply power and expect it to spin at synchronous speed.  In the instance of using the machine as a motor, you short the armature winding, once this is done you allow the three phase AC to the field windings.  This will cause the rotor to begin spinning.  Once it is very close to synchronous speed remove the short supply current to the armature winding at which point it will synchronize with the system.

Other than efficiency though the synchronous machine provides some other benefits in that you can adjust the power factor of the output of the generator.  For instance if you have a load that is leading the generator, you can back the generator off so that the leading load supplies power to other surrounding loads.  This is known as power factor correction.  It is done by altering the excitation current used for the armature.  Operating the generator in an over excited state to deal with a leading power factor, where you have a lagging load, can actually cause the generator to fail eventually due to overheating.

This ability to help correct power factor issues coupled with the high efficiency and constant speed operation leads many facilities to use it for generation.

So there was a quick run down on the most common AC machine, how it works and why it’s used.  Next week will be induction machines, these are becoming more prevalent in generation thanks to wind power.