The Minuteman » Unfiled » Damn Those Fudds

Earlier last week an article was printed authored by a fudd who ended up being a member of Mayors Against Illegal Guns.  That fudd has been thoroughly beaten to death and it does nothing to beat a horse further after death.

However often there are times when I wish celebrities would keep their mouths shut.  That way they won’t put their foot in their own damn mouth.  Today was one of those days.

It appears that Mr. Engvall is a fudd and doesn’t think people should own semi-automatic firearms. 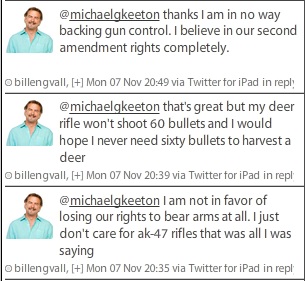 First of all, firearms are not only used for hunting but for other purposes as well.  These purposes range from competitive sports to self-defense.  Note at the end he claims to support the rights guaranteed by the Second Amendment completely.

Ahh, so now he believes in the rights of all firearms owners and just doesn’t care for the AK-47.  It appears though he has made that statement not with regards to full auto but semi-auto given his tweet to Michael stating he doesn’t need 60 bullets to shoot a deer.  While that is true, you may need two.  Depending on the game you’re hunting you may want 5 rounds immediately accessible to deal with a group of varmints.  Lastly what about the defense of your home and family.  We come back around to the variety of different purposes for a rifle.

His statement though hits harder and farther with me than most people.  For those who don’t know, The Minute Woman has radial nerve palsy
.  This limits the ability for her to lift and open her hand.  Given those limitations you can probably guess that for her to operate a bolt action rifle is a difficult exercise.  Doubly so given the multiple axes required to charge the weapon.  An AR-15, or any of my other semi-auto weapons she can handle and use with very limited effect from her disability.  With an AR-15 she can easily go hunting with me and shoot a follow up shot quickly and accurately.  Where as with a bolt action rifle the time and awkwardness of cycling the action makes a second shot almost impossible.

My wife can enjoy hunting through the use of semi-automatic firearms.  A sport that Mr. Engvall likes and enjoys, but apparently he wishes those to enjoy it just like him, disregarding technology that makes the sport safer and more enjoyable.  Mr. Engvall I can hunt the muzzle-loader season, does that mean all modern cartridge firearms should be banned?  Or I could go even further and just hunt bow, should all firearms be banned then?

Mr. Engvall, you have provided ammunition to the enemy.  You have attacked the rights of fellow hunters and citizens, intended or not.  Lastly your statements and beliefs serve to remove many from the sport of hunting.  Given those three pieces of information it is obvious that statement was as idiotic as reaching down and grabbing a muffler after test driving a car.  Here’s your sign Fudd!

*It should be noted that he can redeem his position by realizing the contraindication in his statements and coming back to actually support the Second Amendment.  That will take more than words though, actual action will be required.

3 Responses to Damn Those Fudds