The Minuteman » Unfiled » Why I Cannot and Will Not Support Occupy

Why I Cannot and Will Not Support Occupy

Earlier yesterday I heard about the following incident at UC Berkeley.

Why did this man throw the water bottle at the woman?  Because she wasn’t going to attend and support the local occupy rally.  I promptly tweeted it and from doing so it was placed on Facebook.  A friend of mine replied with a comment and there was a small exchange. 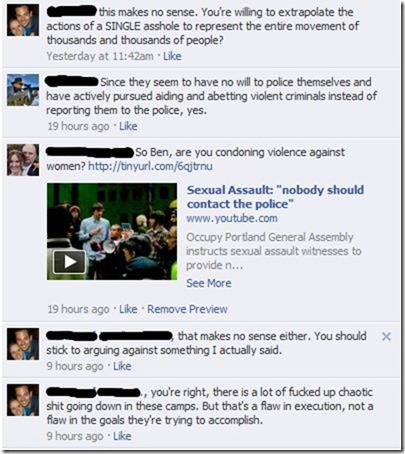 I began to write up a response on Facebook and it grew to the point where it became a post in and of itself.  It became a clear cut definition of why I can not and will not support the movement.

The first and most principled issue is that while I agree that there is a problem, I have a strong disagreement with the proposed solution coming out of those involved in occupy. Their solution to the corruption is more government power and expansion. Completely disregarding the fact that large government provided the power to create this problem in the first place, much less grow it to its current size.  Give the more power to the government to regulate industry, never mind that government interference in the market is what allowed the bailouts.

So between that and the type of behavior I see out of occupy, it limits the support I’m willing to give.  Instead of fellow protesters acting to remove or turn in those committing crimes, they are acting to shield them from the police.  This makes them as guilty as the criminals.  See aiding and abetting.

TMW’s example of the video out of Portland provides another window considering their camp as a whole issued that statement as a representative of occupy.

TMW’s statement is right, they have no respect for women, and their actions prove it.  Not only do they recommend not reporting the rape, but are actively discriminating against women.  I am not the only one with that type of view, and it was a woman who brought it to my attention complaining about the discrimination.  Add that to the initial incident I posted about being a woman assaulted by a man it becomes quite relevant.

If they acted like adults instead of spoiled children throwing a temper tantrum I might actually care and converse.  Sitting around occupying an area while attempting to prevent others from using the space to draw attention to your plight is like a kid rolling around on the floor of the supermarket screaming because they didn’t get what they want.  Not all are like this, some I actually have had a decent conversation with.  Those however have not been the majority experience for me.  Then add that up with the violent crime as well as general theft and it’s obvious they have a serious deficiency with their views of private property as well as personal rights.

This childish behavior has also been quite visible to me without doing much effort on my part.  More often than not my experiences have been similar to this:

fun trick: give #iamthe53 people an injury that will force them into a hospital stay. suddenly the system doesn’t work anymore

Even more than the quote promoting violence against those with differing opinions read through the comments too.  One guy, who’s post was censored, did nothing but spew profanity and call names instead of discussing the topic.

From my position the difference between occupy and the tea party is best put with this image: 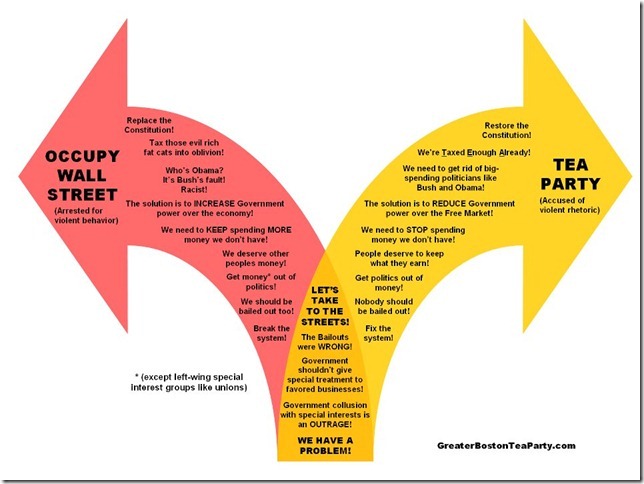 So it can be surmised as this, every time I see something like in the original post, it further cements my feelings for two reasons.

1) No one polices themselves as stated above.

2) No one attempts to remove themselves from the group to separate themselves from the behavior and instill the point of disagreement, but instead remains in place there by condoning it.  (Find me a counter presentation to TMW’s video that tells occupiers to saying to report crimes instead of the message provided above to prove me wrong).

My integrity and my word is unbelievably important to me.  I will not loan my credibility or integrity to a group of individuals with such low morals who do not stand for the same beliefs and principals as myself.  My support for occupy is limited to allowing them to exercise their right to speech and peaceful assembly.  However their actions towards private property as seen in Oakland have indicated their move in a different direction.  Couple that with the damage and costs being accrued to be covered by the taxpayer, who may not support their cause, and we arrive back at my original position.  I cannot in good conscience support them.

It is said that your right to swing your fist ends at the tip of my nose.  The same goes with your right to assemble and speak.  When you inhibit and prevent other members of the public from travel on public roads, when you damage public property sending tax payers the bill, and then go and damage private property in the end, you no longer have a right.  You no longer have a right because you are taking property and inflicting your will upon others there by inhibiting their rights.  If the protesters want to take over a park for an extended time a couple things need to happen:

Neither of these matter in the case where someone has actually donated private land for them to use.  That’s fine and they have every right to be there for as long as they want without police harassment until such time as the owner of the land feels they should leave.  You absolutely have a right to protest and peaceably assemble and I support that right.  The question is what right do you have to, infringe on the rights of others to conduct business, have the government take their money to pay for your protest, and prevent others from the free use of public space and facilities for extended periods of time.

So given the fundamental beliefs, their attitudes towards crime, and their actions towards the rights of those who are neutral or against their stance I can not and will not support them.

9 Responses to Why I Cannot and Will Not Support Occupy