The Minuteman » Unfiled » Sometimes making things go boom is hard to do!

Sometimes making things go boom is hard to do!

So I went out to help Joe with some testing today.  Last weekend there were some problems with boomers and testing needed be done to figure out the exact cause of the failures.

Joe and I stopped by the Taj and picked up some equipment however Joe forgot the keys to the magazine and we had to leave the targets that were stored to test how they react over time.

Once over at Mecca we began to mix explosives.  I noticed but didn’t think anything of it that the dust from the bin of KClO3 was less than usual.  Our first experiment was 4 control targets using our standard production methods and baggies with 8 other targets using different packaging methods.  We laid out the first 6 targets.  Two of each.  Loaded up with 62 grain JHP and started on the right.

Bang, dead center, nothing.  Move to the next one.

Bang dead center, nothing.  Now at this point we’re moving on to the normal production control targets.

Bang dead center…. Nothing. I’m thinking, “what the hell is going on!”

At this point Joe and I inspect the targets, they didn’t even begin to detonate.  We talk and think well maybe the ethylene glycol absorbed moisture, the bottle is almost empty.  We also realize it’s pretty cold and maybe that’s a problem.

We head back inside to mix up a new batch with fresh ethylene glycol and warm up the targets in front of the heater.  We continue discussing the problems while mixing up the new batch.  I realize that cold can’t be the problem.  A year ago we were detonating with it about 15F out.  At this point we both agree it must be the glycol.

We finish up the targets and take them out to test.

Bang, nothing.  Bag is sitting there because it wasn’t a full square hit.  Throw the bag into the air by shooting the crap out of it.

Glycol is out.  Whiskey Tango Foxtrot!  What has changed!?  We mixed them at Mecca, but how could that cause the recipe to fail?  We go inside again and continue discussing the problem and I start staring at the potassium chlorate.  Finally I ask Joe, “where’s all the dust?”  Normally there’s dust everywhere, this time there’s no dust!

We decide to split the amount and make two batches.  Both with the straight freshly dehydrated KClO3, one that has been further ground in mortar and pestle.  A second that has been unmodified and left at it’s current size.  We finish mixing up the batches and have two of each target with a 5th super boomer from the excess left over from each.

We take the boomerite out back and lay them out for testing saving the mix box for later.

At this point I’m becoming a bit annoyed and disappointed.  I have no clue what’s left.  Joe mentions we could try a V-max bullet.  I’m up for that but my concern is, the past three years I’ve used these 62 grain bullets without a problem.  Joe goes and grabs his V-max mag and I set up the targets left over from the first batch and set up my super boomer.

I tap the mag and charge.  Swing on the first boomer and bang.

Nothing. (expletives run through my mind.)

What in the hell is going on.  The last boomer fell over.  I flip on the safety, walk the 25 yards and put it back up right.  Walking back at about 10 yards I say F-it, I’m far enough, it’s not going to blow anyway.  I’ll go entertainingly close.

Immediately I feel my face stinging.  I have a wall of smoke rolling towards me.  I walk back and smile at Joe and say, “Well it worked that time!”  At this point I start rubbing the corner of my lip.  I took a bunch of prills to the face and arm.  Joe even 25 years away said he was feeling the prills.  I clear my weapon and notice something.  This folks is why you wear eye protection! 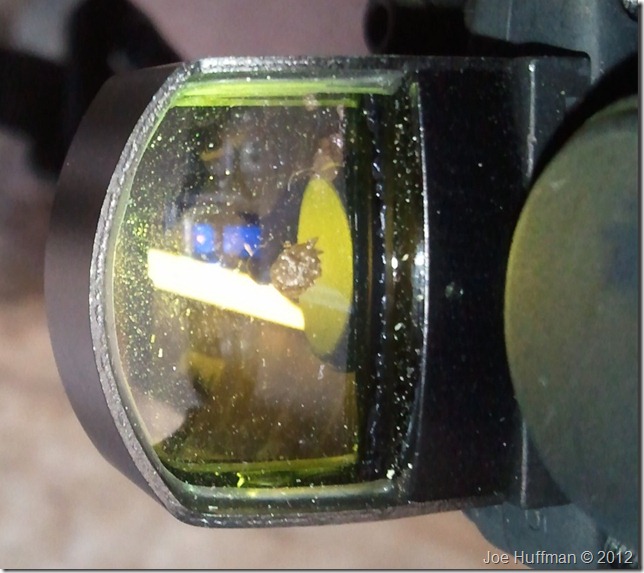 We clean up and decide to head back to Joe’s place to do some analysis.  We examine the KClO3 under a microscope.  I think we found our problem.

I’ll give you a hint, the three items above are KClO3, normal sugar, and flour.  Guess which is the KClO3.

If you guessed in the middle you’re right.  Normally the KClO3 is like powdered sugar or flour.  Doing some research we discovered the Mil-Standard and it appears they have different sizes.

Now we need to try and establish, empirically, which size we need for Boomerite.  Joe’s ordering a flour mill to try and grind the KClO3 smaller, we’re all ears if anyone has any other ideas on grinding it smaller.  Joe has video of the testing and hopefully he posts it here soon.  I want to see that explosion from his point of view.

2 Responses to Sometimes making things go boom is hard to do!