The Minuteman » Unfiled » And So The Torture Begins

And So The Torture Begins

Dot Torture that is!

So I’ve got with Joe to the past couple action pistol and steel matches and come in middle of the pack.  I don’t always let my type A personality take over, but middle of the pack just isn’t acceptable.  I know I’m going to be there for a while, it’s going to take time and practice.

Today was the first time in a while I actually spent some time at the range for some serious practice.  I started off with just some standard target shooting at 7 yards eventually pushing it to 17 yards.  Then I switched to the 1911 with the .22 LR conversion kit.

About 2 years ago I bought a Kimber .22 LR conversion kit for my 1911 with the statement I can practice more.  Well, I have practiced more, with anything other than my pistol.  So I finally broke it out yesterday and figured I’d review it as well. 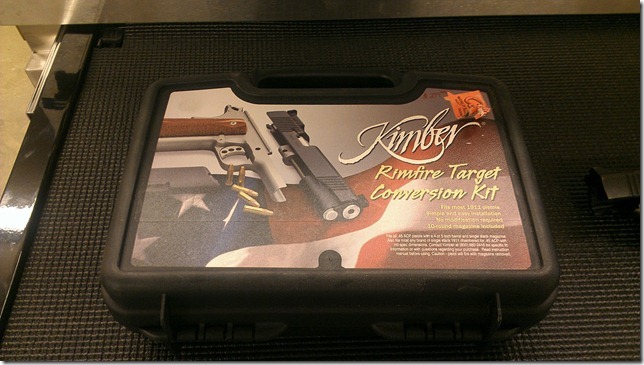 The case is solid, makes storage easy and protects it especially if you do your conversion at the range. 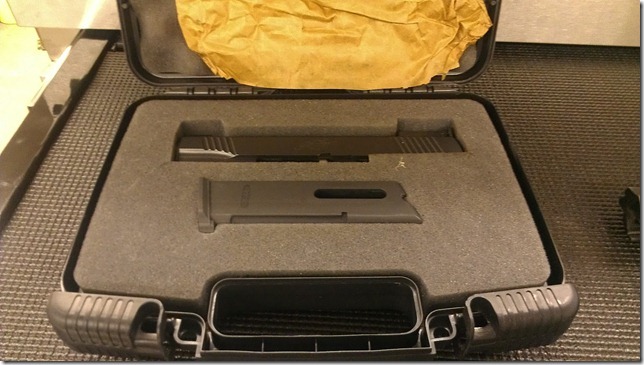 Initial thoughts were that the construction was solid, the overall finish was extremely nice.  Though with such a nice conversion kit, it was disappointing they shipped it with a polymer magazine.  We’ll see how long it lasts. 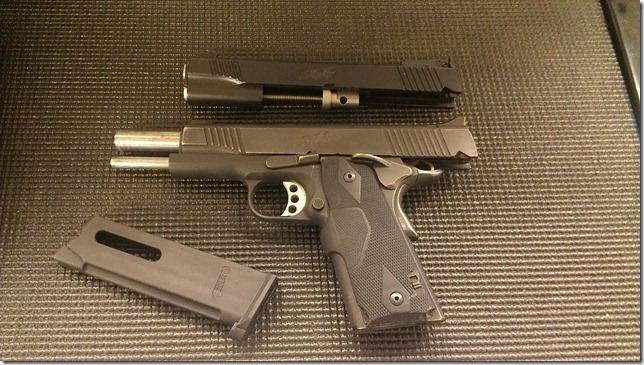 There was a nice coating of cosmoline on everything so I fully stripped it down and cleaned it before assembling it on my 1911 frame. 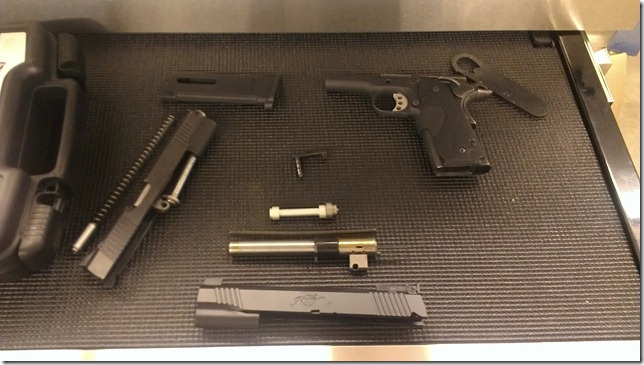 Parts and pieces are the same as the standard 1911 frame and slide. If you know how that goes together you can disassemble a conversion kit and put it back together.  Seriously, not hard.  Pop out the the slide lock, pull off the old slide, put on the new one and reinsert slide lock! 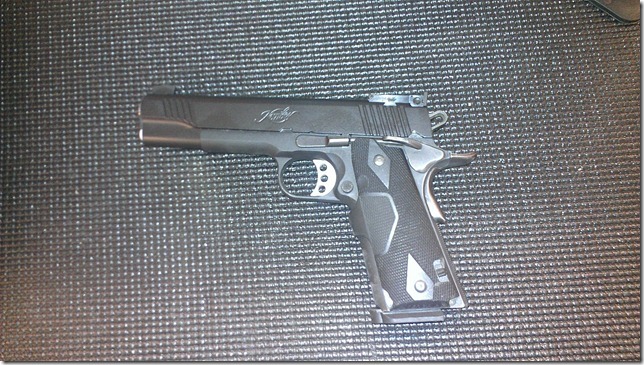 The finished product after being cleaned and mounted on the 1911 frame.

It came to my attention as I started writing this I didn’t take a picture of any of the targets I shot slow fire at 7 yards for practice and familiarization with how it shoots.  I do however have another picture which I will get to later.  I ran approximately 150 rounds through the conversion kit with no issues.  I actually borrowed a 22 mag from the shop gunsmith who I happened to know from the LPC Action Pistol matches.  I do not remember the brand off hand, however the kit ran just fine with the third party mag as well.  Only complaint is that the slide doesn’t lock back on the last round thus making slide lock reload practice impossible on the conversion kit. I haven’t found any magazines that allow the slide lock to function yet, but that doesn’t mean I’m going to stop looking.

So, thus far this .22 conversion kit is getting the thumbs up from me, however I haven’t looked at the prices lately but I’m sure they’ve gone up.  This was listed at Cabela’s when I got it for $300, though I snagged it on sale for $275 at the local store.  They currently list for $330. 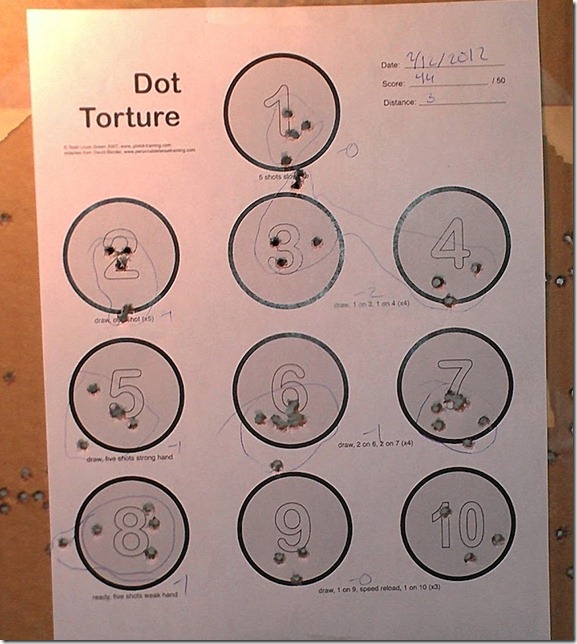 It was pretty bad though it was obvious I was pushing.  Those 5 shots at the top I was walking up to find the correct position for the sight picture that close.  I then moved on to my XD and moved into something with some recoil. 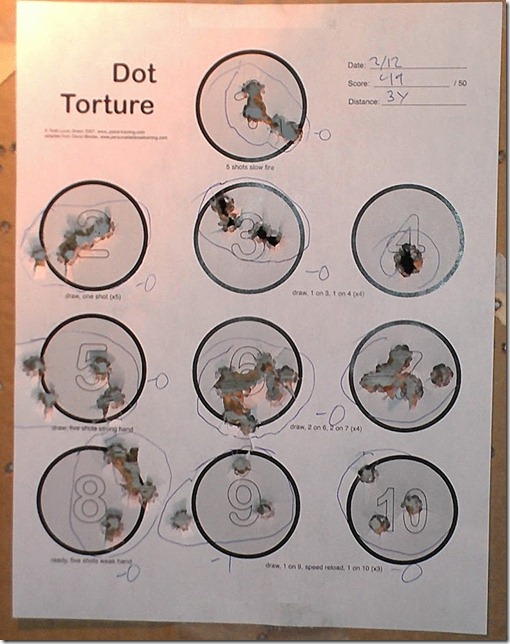 As I was shooting the string I became very concerned when it game to dot 4.  I couldn’t see any fliers in the cardboard though that were new, it was all pre-existing holes.  Before bringing the target back after shooting the string I did a little experiment.  I closed my eyes and pointed straight out to find my natural point of aim.  It was at dot 4, my body was triggering off the natural point of aim to break the shot.  I didn’t push far beyond my comfort zone with this one, I was pushing but I wanted good solid hits.

Reviewing the target though it shows I need to work on shooting with my weak hand more.  It’s pretty clear I’m pushing and having recoil problems off hand.

I’ll be going back for more practice in during the next off weekend from action/steel shooting and I am going to increase the distance for dot torture.  I need to send out an email to some friends in the interim to see what can be done to help my 45 supplies for matches as well as some for practice too.  Joe’s offered me time on his reloader, which eventually I’ll probably take him up on, but I’ve need to solve the problem in the interim.

In closing today I was able to get a picture of just pure win. 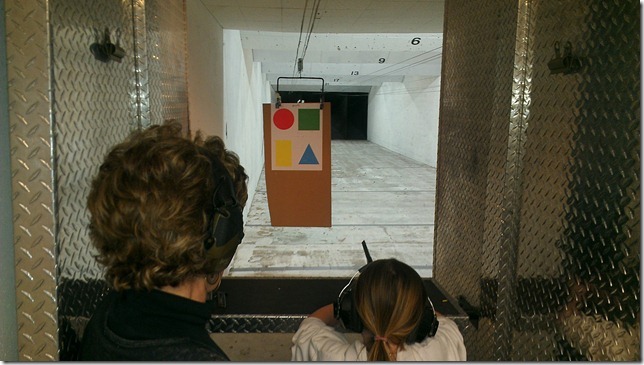 The little girl informed me she also got a BB gun for Christmas.  At least that’s what I think I heard through the hearing protection and gunfire.  As she was leaving I smiled at her and asked if she had fun.  She grinned back and said, “Yup, it was a blast.”  Sarah Brady must be crying in a corner somewhere.

*A note to the FTC, FUCK YOU!  No one paid me shit to write this review.  I paid out of my own pocket for the conversion kit, firearm(gift from dad so yeah…), ammunition, and range fees.  No even just sent me hardware to review, I bought all of it.**