The Minuteman » Unfiled » So… Here’s my Varmint Rifle

So… Here’s my Varmint Rifle

I have a friend who’s currently building himself a varmint rifle and I told him I would take some pictures of mine and do a quick run down. 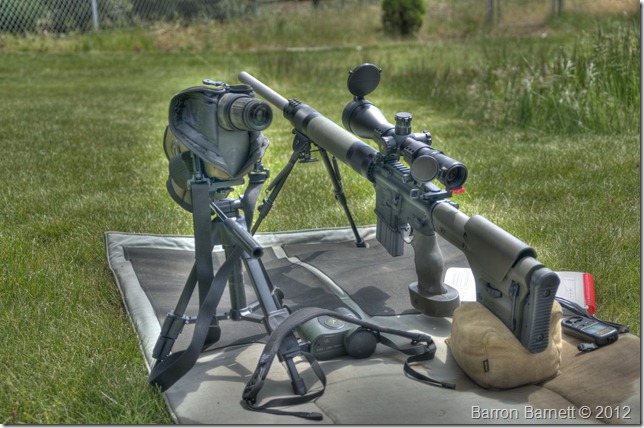 My varmint rifle, like all of my ARs are Rock River Arms.  I was apprehensive of getting an AR until I handled a Rock River.  I’m not too fond of guns that rattle when I handle them or shake them. A friend let me use his Rock River and there wasn’t any slop or slack in the rifle.  I said I’d give them a try.  Just prior to ordering this one I was seeing numerous failures of a few other brands while at the range.  I wasn’t exactly the most thrilled with the idea of finally getting a “Mattie Mattel That’s Swell” rifle. 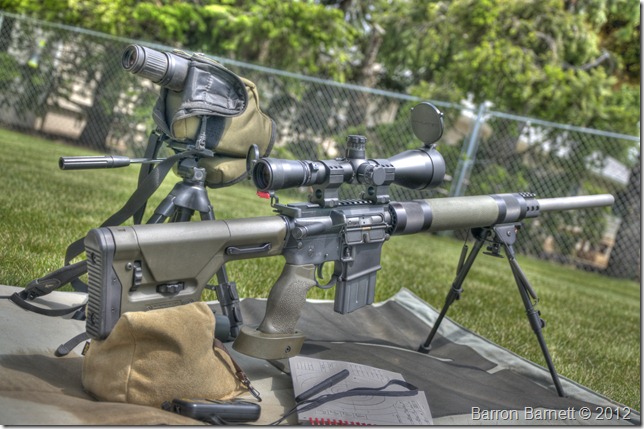 I’m pleased to say though this rifle has NOT disappointed me though.  While I don’t burn nearly the number of rounds through it as I would the rifles I use for cleanup at Boomershoot, I used this as my primary rifle after leaving the far hill.  Shooting my .308 has almost gotten routine.  So I wanted to do something different.  So I moved to the 400 yard berm and started poaching. 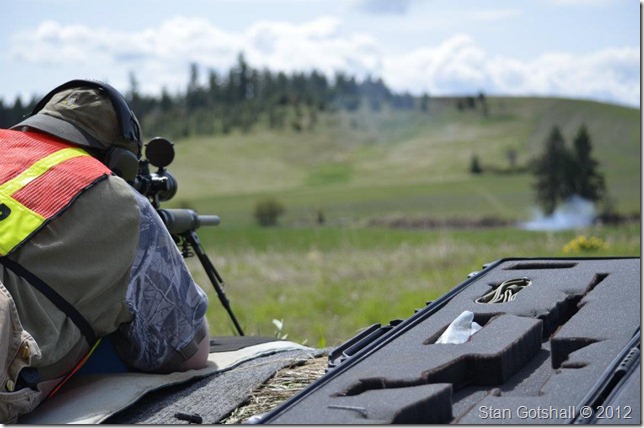 For those who have never been to Boomershoot, poaching is where you take someone else’s target.  Now no one really owns a target, but usually people won’t go for targets that other’s are shooting at.  Just a mild courtesy, he’s expending ammo for it, let him have it.  Then there’s a group of us, many of whom I associate with, where the normal targets aren’t hard enough.  Where we have all reached the conclusion that the hill is fair game, shoot them as you see them.  For you see, when someone else is shooting at the same target you are, there’s now a time constraint.  You can go even further and start reading how close the person is to getting the boomer.  You eventually are able to tell, “That’s going to be gone in the next two shots.”

So why would I use a rifle like this to poach I hear you ask.  It’s quite simple really, lower recoil means if I’m in a proper position I can self spot.  Semi-auto means I can self spot, adjust, and immediately shoot again with a correction if I screw up, or I have moved far from my zero.  For instance if I shift from the left of the berm to the right of the berm my wind will shift slightly but my range will change by a about 10-15 yards.  More than enough to affect the point of impact when shooting at a 3 inch box.

So what exactly is in and on that rifle that allows that to happen?

Both the lower and upper are manufactured by Rock River Arms as I noted above.  So lets start with the lower.

The lower has the following:

The Upper is even simpler:

Notes.  Get decent glass and rings if you plan on building your own rifle.  I find nothing funnier than when someone drops a ton of cash on a rifle and then gets a 30 dollar scope and rings.  Then when the rifle can’t shoot they blame the rifle.  Sorry there sparky, my first guess is it’s a split between you and your cheap optics.

For those who do not understand, here’s a quick run down.  I’m not trying to be condescending, but there are a lot of people who don’t understand the basics of optics, much less how they are actually mechanical and why it matters. 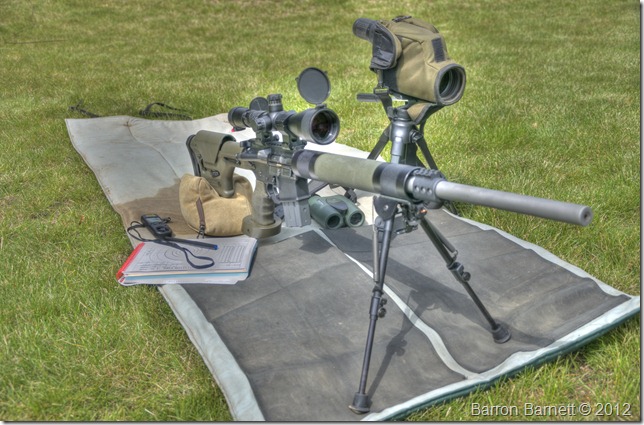 You get what you pay for like any tool, and spending upfront is a wise investment when it comes to tools, especially ones that are going to be beat up.  Just because you don’t throw your rifle doesn’t mean they don’t get beat up though.  Each shot causes an impulse shot into the internal mechanism of your optics.  What mechanism I hear you ask, it’s just glass.  Ahh, but it’s adjustable glass.  Those knobs on the top and side cause the glass to shift is image in 1/4 minute of angle increments.  Read that as a single click moves it 1/240th of a degree.  That’s pretty dang small.  Now when you pull the trigger, you have caused a shock impulse to the system.  You need that optic to remain unaffected by that impulse.  For if it does change, you have just altered the zero (point of impact relative to the cross hair) of the weapon.  Just because you make the correction from the last shot doesn’t matter, you have a new error that is unaccounted for.

On top of that you get much better clarity out of better glass, this means a brighter image and better visibility in lower light conditions.  You don’t have to spend an arm and a leg on the scope and rings but you can’t skimp either.

This goes the same for rings.  Get good solid rings, preferably the kind that are split horizontally where the base of the ring that attaches to the rifle is solid.  Lap those puppies to keep excess pressure off the tube.  I also use a thin piece of double sided tape to hold the scope in place and provide extra cushion.  When you put the scope on, use a torque wrench.  Write down the settings and torque everything uniformly.  Use blue Loctite when you attach the tops of the rings to the base.  I torque to about 25 inch pounds at the joint between the rings.  The Loctite will help keep those screws from backing back out.  The base of the rings I torque to 65 in-lbs. using a pre-calibrated torque wrench specifically for my rifles. 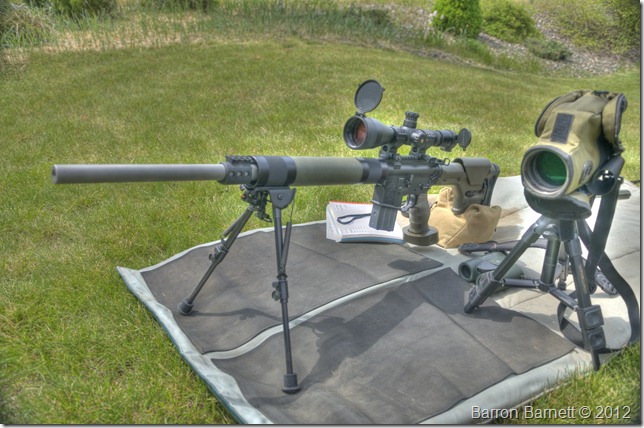 First thing I do on taking the rifle out is hit those base nuts attaching the rings to the rifle with the torque wrench again.  I also go over and make sure nothing is rubbing on the free float, ensure nothing is loose including the stock.  Again, anything loose can cause changes in the rifles behavior between shots.  That’s bad, we want sub minute of angle, not barely sub minute of berm.

The grip and the stock actually help accuracy by making sure the shooter is in a more natural and comfortable state.  When you start muscling shots, that is when you start missing.

So there’s my varmint rifle.  She runs hot and fast and shoots straight.  She’s a fantastic rifle and not one that you can blame misses on the tool, it all lies on the operator.  That’s the way I like it.

2 Responses to So… Here’s my Varmint Rifle