The Minuteman » Government » Can We Start Ridiculing TSA Agents Publicly Yet?

Can We Start Ridiculing TSA Agents Publicly Yet?

About a year ago I called for people to start verbally harassing and otherwise making people who work for the TSA ashamed of what they do.  There were a few people who seemed to think that it was a pointless idea and that those people were just doing a hard job.

Here’s my problem with that.  TSA agents blatantly violate and ignore their own rules and regulations, and then you have some agents while violating said rules, they act in a way as to desecrate a deceased loved one.  Then they laugh about what they just did.

“I was told later on that she had no right to even open it, that they could have used other devices, like an X-ray machine. So she opened it up. She used her finger and was sifting through it. And then she accidentally spilled it.”

“She didn’t apologize. She started laughing. I was on my hands and knees picking up bone fragments. I couldn’t pick up all, everything that was lost. I mean, there was a long line behind me.”

Out of respect to the deceased and their family and friends, under no circumstances will an officer open the container even if the passenger requests this be done. Documentation from the funeral home is not sufficient to carry a crematory container through security and onto a plane without screening.

So I’m sure this particular agent will receive some extra training but that doesn’t excuse her attitude and behavior toward this passenger.  Behavior such as this from TSA agents is not the exception but the norm. There was a recent congressional report for Congressman Marsha Blackburn that detailed only 50 of the numerous crimes since 2005.  Most disturbing of the 50 detailed was the following statistic:

Theft is followed closely by sex crimes and child pornography charges, with 14 such incidents listed in Blackburn’s report. Six TSA employees were charged with possession of child pornography; one of them got caught because he “uploaded explicit pictures of young girls to an Internet site on which he also posted a photograph of himself in his TSA uniform,” the report notes. Eight others were charged variously with child molestation, rape (including child rape), and even running a prostitution ring. It’s not hard to figure out why persons possessing such proclivities would seek jobs where they would be able to ogle and grope other people’s private parts with impunity. 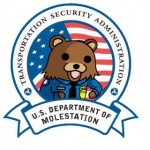 So I again ask, why do people put up with this behavior and not start causing discomfort?  At a minimum you might make them police their own instead of everyone just looking the other way.  Heck, even the legal system is looking the other way and the real reason these individuals are in trouble is they got caught.  That’s why they are given probation for knowingly and willfully committing a crime.  Not just probation, but their record will remain clean without a conviction.   Whereas if you’re unlucky enough to get in an auto wreck from bad weather, you end up with a conviction, even though you intended no malice or harm.  They willfully violate other agency rules and cause damage to medical equipment.  Then after they’ve done the damage they play dumb about it.

Our congressional representatives instead of actually attempting to solve the problem have instead just exempted themselves from the indignities and crimes done by the TSA.  There have been a few instances where the TSA has abused a congress critter but the furor quickly dies out.  Our legal system as shown above is refusing to hold agents accountable for their actions.  For all intents and purposes though government has been shown to be incapable and inept and reining in the monster they created.  So other than hanging agents from trees, running them out on rails, and buckets of tar and feathers what is there left?  What is left to cause agents to either police themselves or leave the corrupt service they have created?

Agents themselves have absolutely no issue disgracing, abusing, and otherwise violating the public which they supposedly serve.  Their job itself is a farce and nothing more that a wasteful joke intended to make those who are sheep feel better.  The batting average of the public at large for stopping terrorist attacks since September 11th is 1000.  The batting average for the TSA since that date is 0.  Sure they’ve lucked out and found items people forgot about, but they have yet to actually find someone who set out with an intent to deceive the system.  They actually fail red team tests on a regular basis.

So given this information, why do the people who actually succeed at stopping terrorist attacks put up with this garbage from a bunch of high school dropouts who are incapable of reading at a 1st grade level?  I think any kid could read that statement from the TSA above and know thou shall not open the urn.

At this point, I want to see a group of passengers start chanting, “Two by two hands of blue”* while others continue to educate the agents on why they’re a bunch of tyrannical tories who deserve no love from their countrymen.

The TSA has created this us vs them environment and the sooner we all realize it already exists the better.  The only argument I have heard against calling these jack booted thugs out as they are was that we could increase the rift.  Well the rift is already pretty damn big, what the hell else do you want?  A hole through the middle of the earth, would that finally be big enough for you to say the time is now?

Personally I think verbal abuse isn’t enough any more, a rail, tar, and feathers I think still might be too nice for most of these folks.  Start off verbally and if they double down on stupid, break out the rail.

*If you don’t get the reference, go watch Firefly… now.  Seriously why are you still here? It’s on Netflix and Hulu and you can watch the whole series and Serenity in a day.

h/t To Uncle on this one.

One Response to Can We Start Ridiculing TSA Agents Publicly Yet?