Even my grandma is calling to ask about guns!

[On my way home tonight I stopped by to chat with Chris and see how things were doing at my local gun shop.  Here’s how it looked as I walked in: 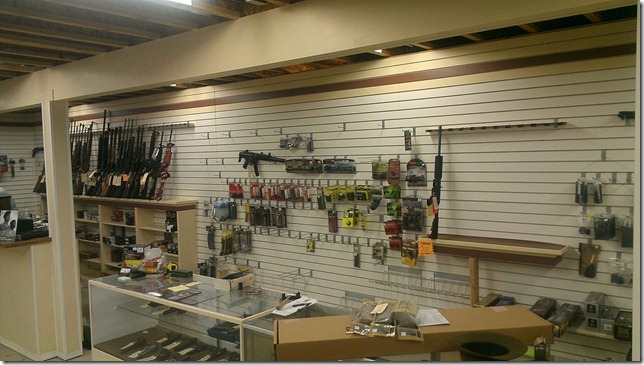 I walked in as the last AR on the shelf was being bought.  The few remaining that look like they are are really just dedicated .22 LR.  The one sole carbine on the right is a 9mm carbine which was also liberated by the same individual who bought the last AR.  Notice how there are no Glock mags, AR mags, or just about any other standard capacity magazine.  Yeah the last of the P-Mags were leaving as I arrived.  They moved, in the middle of no where mind you, in a store that’s mainly known as a golf shop, over 50 rifles in the past 4 days they were open for business.

So here’s what it looked like as I left from the purchase of a single individual: 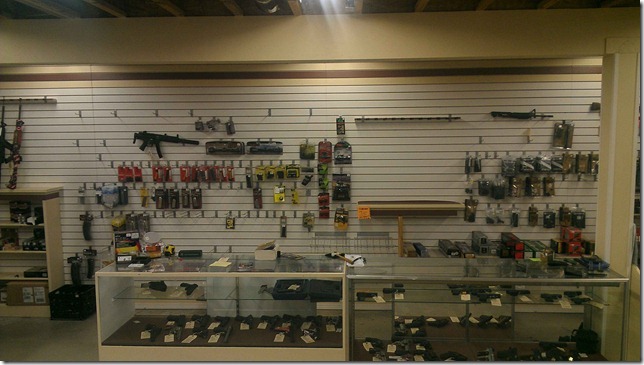 To give you an idea of how serious this rush is, he was asked if he had any SCARs or other high end rifles and was offered cash for purchase.  Think about that for a second folks, people were arriving cash money in hand to buy these.

I don’t think our opponents have fully realized what they have done.  I can guarantee you that those who have bought rifles over the past weekend aren’t planning on turning them in if they’re outlawed.  I went through all the pistols he had left.  Most were single stack or revolvers.  Every other normal capacity Glock, S&W, and XD was gone.

People are seriously afraid and I cannot say that the fear is ungrounded.  But as piece of good news I do think that Sebastian is right in this following statement:

This is not our last stand, it is theirs. If we beat them back now, if we deny them their agenda and keep the lawmakers in line, we will sweep these people from the field. They will, like Custer, have underestimated our numbers and our ferocity. We will dog our lawmakers. They will be sick of hearing from us by the time this is over. Obama’s historical legacy will be a lousy economy, and an ineffective and bumbling second term. It is our time to show the weak and pitiful Republicans how this is done, and how you beat Obama.

There’s no question though folks, this is going to be a fight.  Do not underestimate the power of our enemy, especially with emotions on their side.  Do not get cocky, do not think that magically we are just going to win this.  It is going to take work and effort.  Write or otherwise contact your legislators starting immediately.  If you’re not sure what to do, follow this write up from Robb.  Sadly again unlike our paid competitors I have to work for a living and I will be busy through the weekend.  My goal is to sit down Sunday afternoon or take the day off Monday and write up an improved form letter based off of Robb’s.  At the same time I’m going to work on creating a simple way to automate the whole process of contacting the necessary people.

Get everyone you can to start writing in as well.  We need to be heard and we need to show our voice.  There is no question that our opponents are dancing in the blood of the dead to merely further their political goals.  Their cards are shown when other politicians admit and explain that the laws they recommend wouldn’t actually prevent something like this from happening.

I offered my help to Chris on arming customers on the political front and got him hooked with with Sebastian’s primer.  My goal is to arm every last customer with the knowledge necessary to help win this fight.

Now is the time to fight.  To those that argue for a ban on assault weapons I say, “Molon Labe!” –B]