The Minuteman » Music » Another Milestone 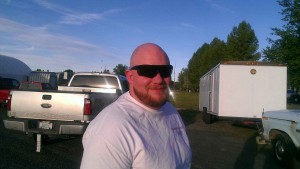 So the Earth has traveled around the sun yet another time in my life.  The total number of times I’ve passed through this band of the solar system sitting on this hunk of rock is 30.

The past decade was an eventful one in my life.

I graduated from college getting a degree in electrical engineering.  I got my first full-time job and recently moved on to bigger and better things.  I married the love of my life.  I stared death in the face and didn’t blink.  In that same instant I almost lost that same love.  I learned how corrupt the system really is.  I was declared most offensive and in the same breath became despised by the despicable.  I expanded in a craft achieving a status that not many my age do.  In so doing I helped a brother deal with grief that few really understand.  I met new people and made new friends, many of whom I’ve never actually met.  I learned how to make explosives and have become a henchman for the evil mastermind behind it all.  And probably a whole bunch more that I’m leaving out.

Many would look at turning 30 and see as finally crossing that line and moving towards being old.  You’re no longer in the prime target demographic for most marketing.  Other comments might be made by some young whipper snappers how you could be their dad.  I don’t care.  Wisdom comes with experience and it takes time to gain experience.

Ultimately though, for all intents and purposes, I should be dead.  Even more than that I should have never been born.  My parents both referred to me as their miracle from god.  There’s a reason they adopted my sister before I was born.  They got very lucky and eventually had me.  Some how I escaped being flattened into a pancake.  For that reason alone I should be damn happy to have found the age of 30.  Further there is a long list of men and women who never made it past 19 giving it their all for their country.  Yeah, I think I’m fine with turning 30, not everyone gets that blessing.

Looking back I only really have one regret and it isn’t because of the perspective on life it gave me.  Honestly I wouldn’t trade that perspective for anything.  The problem the consequences still haunt my dreams since it was ultimately my decisions that set off the chain of events.  I have no problem paying for my own mistakes, I don’t like seeing others hurt because of my screw ups.  Again, lesson learned and honestly without it much of my “wisdom” probably wouldn’t be with me yet.  There is however nothing that can be done to change it so I merely embrace it for what it is.

Today the wife and I are going to go out to eat followed by going to see the Nutcracker and basically recreate one of our early dates.  We have a town car and a hotel downtown so we can enjoy the drinks we couldn’t the last time we went.

I’m not sure what the next decade is going to bring exactly, but I have no doubt I will find a way to pack it full of experiences worthy of story telling and create nuggets of wisdom worth sharing.

So I leave you with some wisdom in song form from Hinder.

13 Responses to Another Milestone