So my wife got me a t-shirt for my birthday today.  I would say it’s fitting: 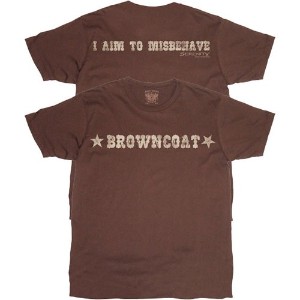 For those of you who may not understand, I give you this:

I spent last night in conversation with my mom regarding  the current state of affairs and the political fallout from the actions of a mad man that shall not be named.*  I find the shirt fitting because I’m not going to run, I am not going to cower, I am going to stand and fight against the coming onslaught.

Ultimately in the words of Malcolm Renyolds, “I aim to misbehave.”  Because my stepping up to the plate is exactly what our opponents would say is misbehavior.  They would rather I just shut up and sit in the corner so they could then use my silence as an indication that I feel guilty for the actions of another.

No.  I aim to misbehave.  I aim to act and pursue this in ways they couldn’t imagine.  I aim to help the big dogs in this fight to take control of the conversation and pummel our opponents into the ground.  I aim to make this their last stand.  I aim to put them into the dust bin of history next to the KKK.

Me thinks I’m going to have to watch Serenity when I get home tonight.

*Seriously, if you put his name in the comments I will perma-ban you, I will not aid in giving these people fame for their atrocities.