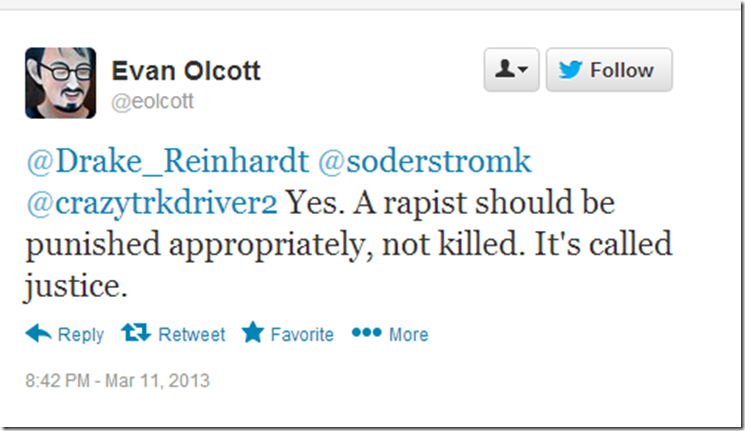 Yeah I saw a flurry on twitter and after that pile of horse crap, I did get involved.  The guy those is the classic case of Peterson Syndrome.

Best part is he kept saying self-defense was ok, but we shouldn’t kill anyone.  Tell me, what is the most effective method to stop an attacker.  As said before shooting someone merely starts a timer.  The shortest timer is smacking them in the face which is darn near instantaneous.  Center of mass causing massive blood loss is also quick, but also fatal.

Feel free to go pay that rapist supporting woman-hater a visit on twitter.  Remember though, supposedly it is me who hates women for wanting them to get training and empower them to be independent and fight off those who would do them harm.  He admitted he had never been raped but he is more than willing to force his morality and views on real victims.

He focuses on his dream “utopia” of training men not to rape as if evil is merely a learned trait.  Instead I teach women to defend themselves to make rapists lose interest and not want to harm women in general.  Too bad most rapists do it because of a control fixation.

Would it be great if evil didn’t exist, you bet your ass, but as long as we exist, the strong will attempt to prey upon the weak and I want the weak to have every advantage for their own survival at their disposal.

I can’t believe this crap, it makes me sick.  Doubly so since I constantly hear how I’m the problem with women’s rights and some how I cause a lack of respect towards women or endanger them.

Why do I teach and encourage women people to get the tools and training to defend themselves?  Because FUCK rapists criminals that’s why.

*Evan Olcott, the internet is forever and your general hate and disrespect for women and rape victims shall be remembered forever you sick horrible excuse for a human being.