So a friend of mine ended up having his site offline last night after a DoS attack took his web hosting offline.

About 3 months ago I decided to give CloudFlare a shot.  After 3 months I thought I would give a quick overview of how it went and what differences I have actually seen.

Page load speeds, there was a noticeable difference when I migrated the site.  I left a archived version of the site available for tracking down broken links and the like.  So this was equivalent of me flipping the off switch.  Using the archived site is unbelievably slower than what it was prior to migration to Word Press. 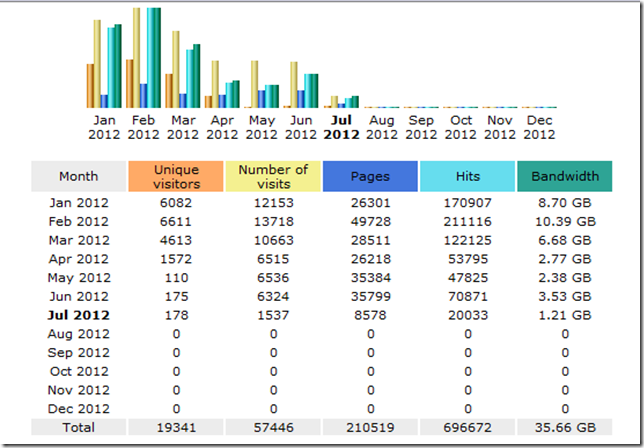 I did the change over in the beginning of April.  Sitemeter and Google Analytics both have shown at least a steady and slightly increasing traffic over those months, with January being the largest.  So I could say that effectively CloudFlare has cut my bandwidth down by 1/3.  CloudFlare’s analytics are accurate as well and provide some extra differentiation. 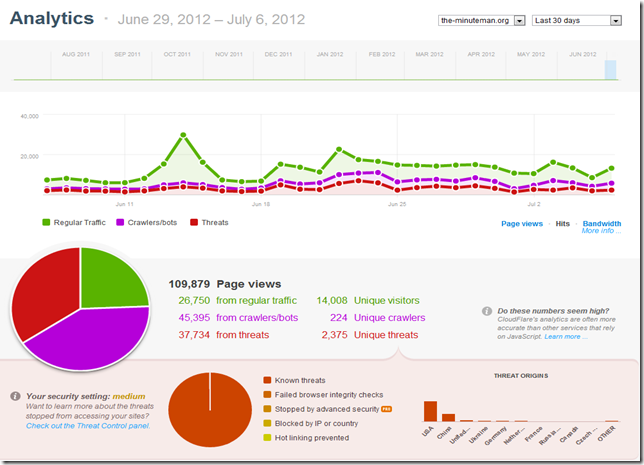 When I first did the change over I did have some weirdness and problems.  Mainly that my hosting provider was reacting to CloudFlare like it was a DoS attack.  The majority of the requests are forwarded through their network for speed reasons.  So the number of high hits from their services made them look suspect.  I got the issues straightened out and things have been much more stable since.

When my hosting provider did have a hiccup, the site content remained available.  While I couldn’t post new content, I wasn’t loosing viewership which was a huge plus.

There are also numerous apps that can be installed with CloudFlare to aid in thinks like link tracking and malware detection.  There is also a service to help monitor for people scraping content, including people hot linking images.

Overall I have found the service worth the setup time which actually was amazingly simple.  I’m not quite big enough to find their pro services worth it, however I do see how they might be beneficial if I had considerably more traffic.

The only setup required is to point your root DNS entry to CloudFlare and enter your DNS info that your hosting provider has into CloudFlare.  If you have a full website and you’ve had downtime from service issues, CloudFlare can help mitigate that.