The Minuteman » Unfiled » Well, That Was Unexpected

Well, That Was Unexpected

So I wrote a post and evidently it was well liked.  I do have a few comments.  First, thanks to all those who linked it.  The quick list I’ve found thus far.

A Girl and Her Gun

Irons in the Fire

Only Guns And Money

I’m sure I probably missed someone but the reason I am saying thanks was because like when I get a link from Uncle or Joe, it’s noticeable.  (Thanks to Uncle and Joe for when you have linked me too BTW).  How noticeable? 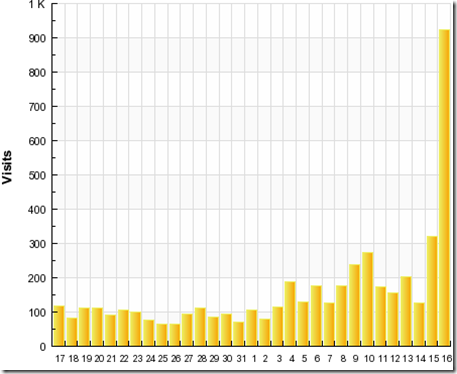 Evidently I said something that a lot of you reverberated with. Awesome, and again thanks to those that linked it.  Now for my comments.

I am fully aware that wrestling with a pig is pointless.  Just the same I think that arguing with Joan is pointless.  So why would I bother writing that response?  I did it because no one had stitched her statements together for all to see the hypocrisy she spouts in a clear cut form.  I doubt Joan has read the post, I doubt even less that she’ll respond.  As my mom said, “I’m not sure she will be able to read the whole thing and comprehend what you’ve said.”  My mom would be right, Joan wont understand, neither will anyone in those groups.

The fence sitters however can understand, they can read, and they can understand what I’m saying. It’s the fence sitters that come new to this debate that may not be exposed to a clear cut statement of what each side really represents.  I finally stepped in and wrote that because I saw a simple and easy hit to lay damage.  Joan made some statements that were down right appalling and that were not exactly the most kind.

Ultimately I did what I normally do.  I sat in the corner ignoring what’s going on, unnoticed myself, until someone does something down right rude, mean, and inexcusable.  They made the double mistake of saying it about two people who are unbelievably nice and kind.  Then I became the 300 lbs. gorilla in the room, hitting them so hard that I knocked them out of the room with nothing left to say.  I know neither of them really care about Joan’s negative comments on a personal level, I just found them down right rude and offensive, especially given the theme of the post.

I saw a way to throw down while remaining clean relatively clean.  If the pig comes back I’ll deal with it at that time, but I doubt she’ll respond because to do so she would have to acknowledge the facts.  She hates can’t do that, she doesn’t know how.  In writing that post though I also provided a pile of new ammunition for those who like wrestling with the pig.  I don’t support it, I find it for the most part pointless, but some find it necessary.

The only reason I’ve been tacking up the CSGV, Brady Campaign, and Joan is because they started it.  I participated in a vigil and they said I was most offensive.  I remembered victims of violence I know that they would not count and they called me offensive.  I remained civil through the whole exchange, I haven’t issued one piece of profanity.  I haven’t even resorted to name calling.  Joe’s right, they brought this on themselves.  Besides, now they’re calling me a Jerk. (Feel free to go post comments in there.  CSGV has no control of them.)

While some may view this as me fighting a pig, I view it as me standing up and saying “NO”.  I stood up to support friends that while they may not have needed my support, but they certainly could use it.  There comes a time when even a fly has to be swatted.  There’s a phrase, choose your battles wisely.  They choose to start this battle and they did not choose wisely.  I didn’t set out to, “Nuke it from orbit,” but I will not say I’m displeased with the results.  If I have one actual weakness it’s that I have a nasty habit of standing up to defend my friends.  Even if that means I need to drop kick a pig that wants to roll in the mud.  If that’s a weakness though, I find it a good one to have.

3 Responses to Well, That Was Unexpected