Lately people have been throwing around the need argument.  It is an argument that honestly doesn’t really matter.  Drunk driving kills how many people every year and does anyone need to drive?  Why not just use public transportation?  Why does anyone need to drive themselves from point A to B?  But again, the argument doesn’t matter, it’s pointless.  Does law enforcement limit themselves to 10 rounds? What about the military?  But they’re different I hear you cry?  Are they?  Do they really need 30 round magazines that turns their guns into mass killing machines?  They should just reload like the rest of us! 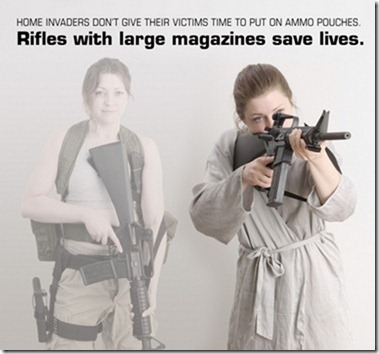 As I am writing this I am coming down off a serious adrenaline dump.  I had wrapped my knee for the night and was dressed in such a manner as not to rapidly exit my door grabbing my weapon and having nothing more than was on the belt of my pants.

Let me start at the beginning.  My local neighborhood gun shop is a block away.  The owner is quite literally my neighbor.  I wave hi to him and his wife on my way to work every morning, we are literally on the same street.  I am merely an additional 100 yards from his business than he is from his house.  Due to my proximity, my willingness, and the fact I hang out and help because one of his sons is my age and he’s a cool guy I’m basically on the business roster.

Early this month they had to attend their buy show in Vegas along with SHOT show.  The shop owner closed up and he and the regular employees headed down for a “business vacation”.  While gone I was put on the alarm system call list, still am actually.  If any of the sensors goes off, they called the shop followed by my phone.

Tonight the alarm went off.  I missed the call and rolled out after my voicemail buzzed.  The shop owner was ahead of me and I texted his son immediately I heard the voice mail and head out.  They were finishing up clearing the building as I walked in the front door.  I had my side arm and a few other tools but I was brining up the rear so bad I wasn’t too worried.  We met up, did some debugging, notice that some of the sensors use batteries and we replaced all of them.  We reactivated the system and went home.

After the first adventure, I figured my night was over, went to a Robb life style of “Pants Free” and wrapped up my left knee.  Two hours later, my phone rang again.  I was out of the house in under 2 minutes, with my pants on, rifle, side arm, and knife.  I merely had the immediate possessions I was able to grab.  I went flying out of the house and flew down my road at about 60 mph flew into the parking lot and slid to a stop just before the front door.  I slipped past the front door, unlocked it, and proceeded to clear the building carefully and methodically. Nothing was out-of-place, nothing was wrong other than the alarm had gone off again. 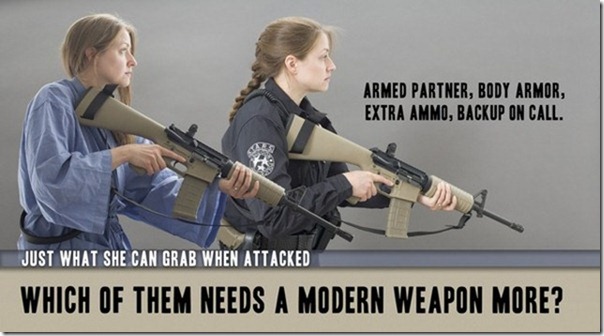 I bring all this up because I want to emphasize a point.  I left the house with merely the equipment I could grab.  I wasn’t tossing on magazine carriers.  I wasn’t tossing on multiple weapons.  I grabbed one weapon that total gave me 61 rounds to put on target.  I grabbed one weapon that could I could accurately and easily manipulate in the variety of conditions seen within the shop.  I had my side arm on my belt which gave me an extra 13+1 should my primary weapon fail.  If I had not left my firearm clipped to my belt, it would have been left at home.

Now some would say, I didn’t need to go down there, or go inside.  Police response where I live is 30-45 minutes if we’re lucky.  Further the cost of a false alarm is expensive and best dealt with.  Yes it could be considered a high risk maneuver, so is letting the criminals inside steal firearms and ammunition.  I’m comfortable entering that environment, I’m familiar with it, I know the layout, I know where I can find cover and concealment, and I know the better ways to get around to avoid kill zones.

Even more than that some would say, it isn’t my business so it isn’t my problem.  To them I would say, stay in suburbia, stay in the city, and leave those of us who like rural life to live among our like-minded neighbors in peace.  I would help my neighbor as he would help me.  Our community as a whole would be shamed by an event like this, and I will be damned if I will let the, “Let someone else deal with it” and “Not my problem” attitude take over.  The owner felt bad it interrupted my night, but in the end I told him I don’t care, doubly so because if anything was happening I don’t care if he’s on site first or I’m on site, the bottom line is the security of the business and the weapons inside.  I would rather them call me so I can give immediate support than have him out numbered in a worse situation waiting for the eventual police arrival.

The whole point of this  though is I was limited to what I could grab and head out the door with.  In this case my AR-15 and my side arm.  In the middle of the night someone is limited to what they can easily grab by their nightstand.  Be it a XDm 9 with a 20 round capacity or an AR-15 with a 30 round magazine. The point is any citizen deserves to be able to take as much fight with them as they possibly can at the drop of a hat.  Criminals do not call ahead or provide advanced notice and they will not give you a chance to go get more ammo.  Why do people like normal capacity magazines, because it’s less you have to worry about when something goes bump in the middle of the night.  It’s less you have to fiddle with.  No one has ever come back from a gun fight and said, “Damn, I wish I hadn’t brought so much ammo.”

*I have two 30 round magazines attached together like this in my rifle.  It was this that allowed me to quickly deploy with 61 rounds in hand.  I have a second set that will be taped up in the near future and relocated to quickly grab.