In Which Ladd Shows He’s a Sniveling Coward

Earlier this week I wrote a post on how I know I’m doing a good job.  Well Ladd to make sure his responses were harder to notice updated his article.  As always he twists words and moves things out of context.

On his blog, TMM added that those who participated in the vigils “are faster on the draw than a personal injury lawyer to dance in blood.”

What I actually said was:

This coming from a group [CSGV] of individuals who circle around like vultures and are faster on the draw than a personal injury lawyer to dance in blood.  When ever there is a shooting the gun grabbers waste no time to attempt to levy the situation for their political gain.  See Virginia Tech and the recent Mount Rainier shooting for examples.  They do not care about the people, they care about their political ends.  Don’t believe me, look at the blood dancing they did in Tuscon while the family that lost their daughter was saying the exact opposite.

That comments was also a direct response to Ladd saying my comments were inappropriate, I added the italics to help illustrate who the subject was from the previous sentence.  I never said anything about people participating in the vigils dancing in blood.  I am saying that those doing it for political means as a heart string are dancing in blood.  The organizations who organized it and are upset that the gun community expanded the effort to include all victims of violence.  Not just the fixed metric of gun violence.

What I find most telling though is that there are no comments allowed on the CSGV blog website.  Updates like the above are hidden and not mentioned.  Basically the only way to discover changes like that is to reread the entire article.  It’s his site, he can do whatever he wants.  I would point out though that I have open comments, the only thing I delete is spam, personal threats, and things that just are noy acceptable in decent society.  I’m more than willing to argue, I even have open comments and user ratings on my video.  Lets look at those stats shall we? 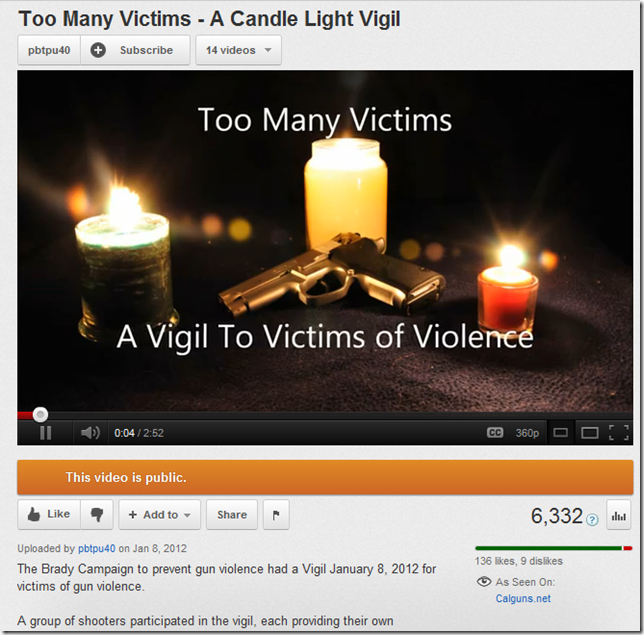 Lets look at the most popular video for Too Many Victims from the opposite view point. 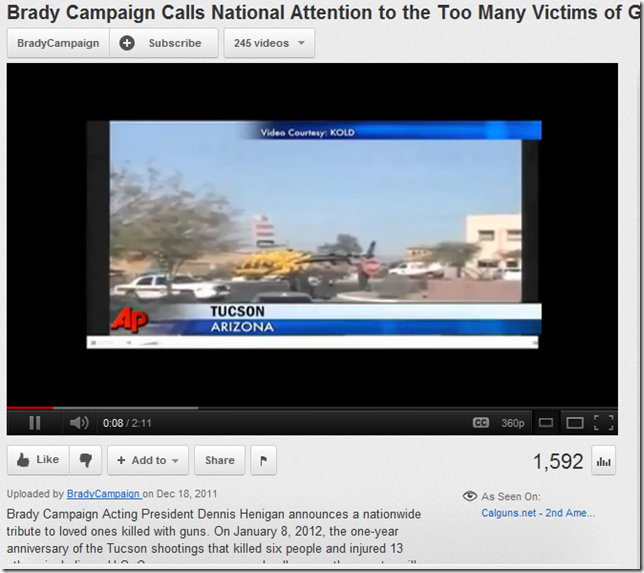 Oh snap, note the Brady video was shown on Calguns.  So now comes the question, how many of those views were from the pro-rights side of this debate.  No option for likes or dislikes so it’s hard to tell how many people liked this video. 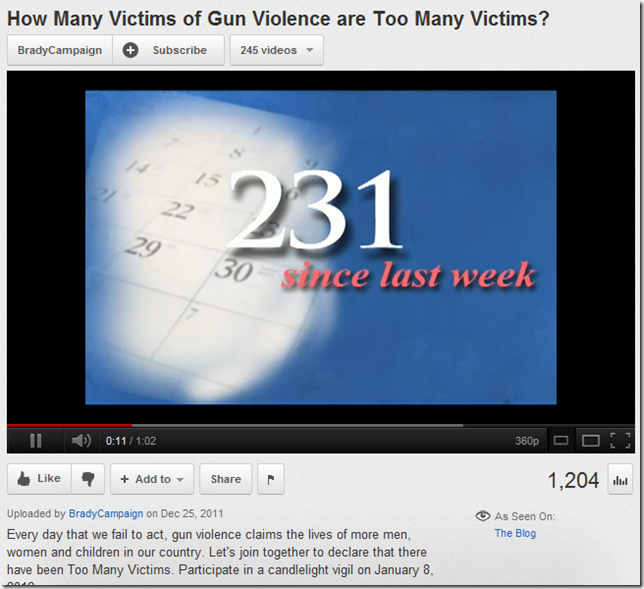 Well, this one was linked by the HuffPost and still only got 1204 views.  Even if you combine the two Brady videos, which have been out for a total of 5 weeks between the two, we got 3 times as many hits in 5 days.

The fact is the Brady Campaign and the CSGV are blood dancers.  They capitalize on the suffering of others to promote their political agenda.  When someone dies, they will use it to promote their agenda no matter what.  Even if it means defending an armed robber.  They will blame changes in legislation that would have had no effect on the incident.  They want to exclude victims of non-gun violence because it doesn’t further their agenda.  They then attack us because our stated goal is to make fewer victims.  Our goal is to arm people with the tools and knowledge to not be a victim.  They are upset with that because with fewer victims there is less blood for them to dance in.