To protect the identities of the guilty we are going to use the following names, A, B, and C.

A is often considered to be the sane one, while his attraction to explosives could be considered insane by some, he operates with a much more conservative view when deciding safe areas, good distances, and making generally good decisions.  That isn’t to say that he hasn’t had a Page Fault like B has been known to do and forget recent experiences.  A has even been known to give the dad look indicating, “No, and stop even thinking about it,” for things that overall might be a little questionable but certainly not all that bad.

B is considered to be a little more crazy and more willing to take risks.  It should be noted that B is more than willing though to point out dangerous items of concern when he sees them.  Often if he is mentioning concern, it’s usually worthy of note.  Most of the time A agrees with the assessment prior to moving forward.

C however is considered unbelievably smart but with a very buggy operating system.  He holds the current record for detonating Boomerite at close range, a record that B will not even consider attempting to break and actually isn’t quite sure how it would be accomplished.

I describe the above so the following story you will hopefully find the humor in it.

You see, it has been a fantastically dry past couple months in the Palouse.  How dry?  We finally got rain for the first time about a week ago since before the 4th of July.  Forest fires are still raging and while we have had rain, none of it has been “substantial.”  It also must be remembered that this is just after harvest so the fields are full of dry stubble and due to the lack of rain many haven’t been tilled yet.  The weekend prior A explained to B why they haven’t been tilled yet.  All conversations are synopsized from memory.

So when B showed up at the berm and noticed that A was preparing a fireball his eyebrows raised.  B left his buddy to take care of other preparations for the explosives and went over to A and said, “We’re doing a fireball?” 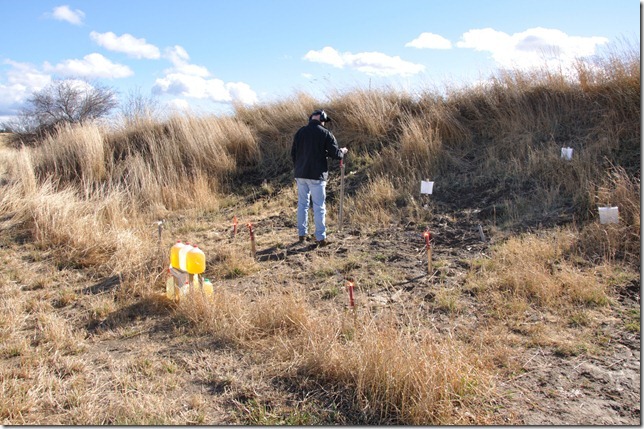 To which A replied to B, “Yeah it has rained, there shouldn’t be any real danger.” And he’s talking over the gusting winds that are common at the Boomershoot site.

B then replies back to A, “I remember the last time we did something like this and we were lucky enough to be in the spring and next to a creek and had 10 or so bloggers on hand.”

A replies, “Yeah but overall there’s not much fuel around and what is here isn’t super dry.”

B just resigns and says mentally to himself, “This should be interesting.”

A short while later the story of the second fireball that should have never been is told by B to A and his companions.  Detailing how it resulted in 30 minutes of fire fighting and the question is posted to B by A, “When should we shoot the fireball?”

B without hesitation says, “First, so we’re not exhausted while trying to put out the fire.”

The explosion and fireball doesn’t even finish after the detonation and B can already hear the familiar crackle of a grass fire. 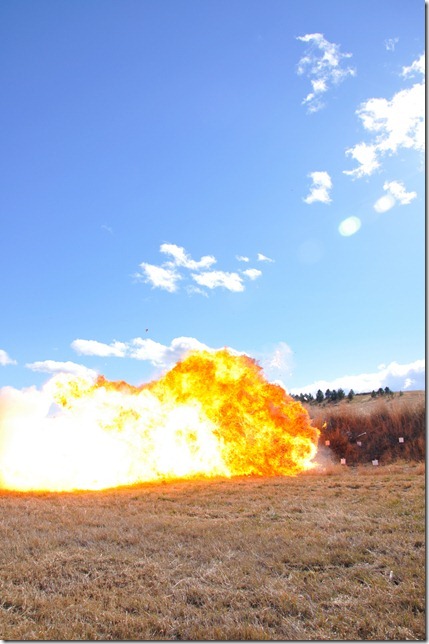 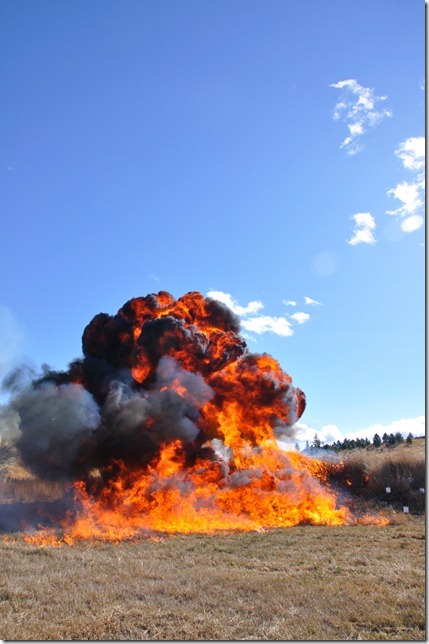 Entertainingly the fireball shot more out than up. (Video will be coming later.)  It shot straight towards A as if to “enlighten him”.  Promptly we put down our recording equipment, though I’m sure B wished to keep documenting the entertainment that followed.  For you see the wind was blowing the fire down through the grass, towards the stubble behind the field.  A promptly ran to the back side of the berm to do damage control. 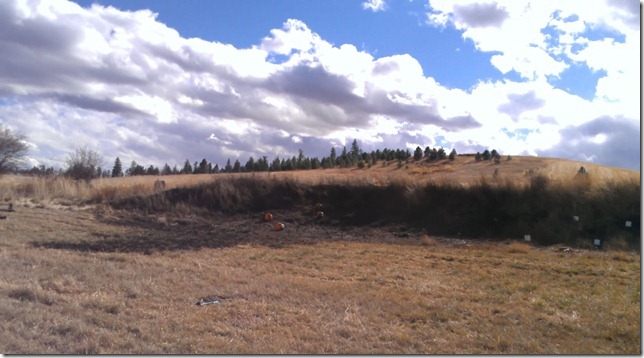 I tell the above because later that night B was having dinner with C since he was in town… C asks B, “So how was the pumpkins?”

B replies to C, “The pumpkins were great, though the fireball was a bit interesting.”

C freezes and looks at B and says, “A did a fireball? That’s got to be some fluke, there’s no way A would do that.  How did you talk him into it?”

C replies to B, “That’s interesting though there is this theory of addicts reverting to the mental state of when they started their addiction, maybe A reverted and was showing off.”

B laughs, then while driving home B remembers something else A told him about one time.

Researchers have begun to explore the cognitive impairment that men experience before and after interacting with women. A 2009 study demonstrated that after a short interaction with an attractive woman, men experienced a decline in mental performance.

I think B may have found another data point for the study.

*I will neither confirm or deny that I am any of the three parties in that story.  I will have video up later.  I’m spending today migrating my last two websites from my old hosting provider that is about to expire.