The Minuteman » Gun Grabbers » One of those nights…

One of those nights…

So yesterday Linoge responded to a tweet and I made a comment.  Well for some reason it got me involved in a Twitter battle along these lines.

We went around and around, literally.  He actually started re-tweeting his own comments he had previously made as if they were some how magically relevant.  What was most interesting though is he was your typical liberal.  By typical, I mean he fit with Joe’s analysis of the communist manifesto quite well.  What I did find quite interesting though was this tweet.

That’s right folks.  This guy actually believes that if you get rid of capitalism you will get rid of all crime.  Delusional doesn’t even begin to describe this particular individual.  His response regarding women and rape later on was just as epic.

That’s right folks, rape needs to be stopped by the honor system.  While I agree men shouldn’t rape women, I violently disagree that gun’s don’t equalize.  I did reply that he needs to explain how all these incidents weren’t an “equalization.”  He never did actually respond.  Overall he I don’t think he looked at a single link I posted.  He even disregarded the FBI UCR and called it NRA propaganda.  He argued that the tool did matter and that all these things were not related.  You see disarming victims would also disarm criminals and thus everyone would be on the same playing field.  He however did not accept my argument that it would reduce crime to a “Might makes right” scenario.

Overall it was a total waste of time.  Seriously I should have blocked him long before I finally did.  And last I checked he was still spamming me with replies.  What I will say though was I was humbled by this comment from Linoge: 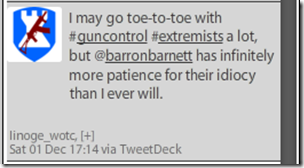 Growing up I never did have a lot of patience.  Even know there are times where my patience wears thin.  I will note interestingly enough there appears to be a gradient to how much patience I am willing to exert with a person.  I make that comment because it appears that my level of patience with a person seems to be directly correlated to the level of intellect I perceive them capable of.

For example I’m much more willing to deal with the endless why’s of a small child than trying to explain something fundamental to some who should understand it or has the capability of figuring it out for himself.

Well obviously I felt he was pretty low on the ladder at the beginning but eventually it was obvious that he was suffering from Peterson Syndrome.  Eventually I just couldn’t take it and blocked him.  I will applaud the other individuals who then picked up and continued to try and get him to think rationally.  I personally think it’s a lost cause, he does not have the ability for rational thought.

I think I’m going to go spend time with the wife.  The wife that woman hating bastard would rather disarm to force her to live in fear than carry a weapon to conquer evil.  As A Girl said: 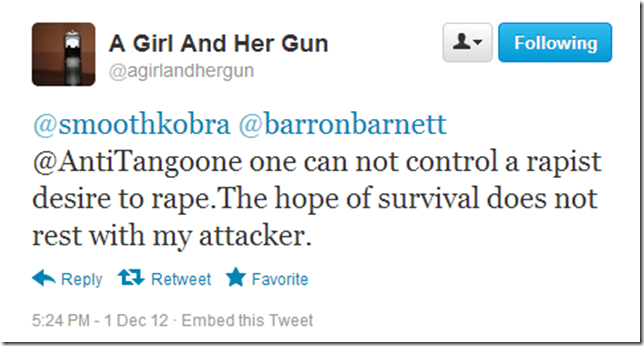 He seemed to think that anyone who carried a gun was living in fear.  He could not comprehend that fear for many of us comes from being forcibly disarmed and at the mercy of those strong than us.  For that he is evil incarnate.   The following concept from A Girl he most definitely couldn’t comprehend.

You, you who hate guns, you gave me nothing.

All that was offered me was a life of fear, of resentment, of bitterness, of dependence…

The gun community has offered me hope and strength, and courage.

They have taught me to have belief in myself.

That, that is why I am so willing to go to the mattresses.  It is that reason I am willing to exert time and patience in trying to force people to admit what they are and what they are attempting to do.  I love my friends and family and I will fight for them, even die for them if necessary.  I think I can spend 30 minutes on twitter expressing to the scum sucking coward how he actually hates women is time well spent.  Especially when I think about what it would mean for some of my friends.  Even more than that, those  who sadly end up walking that same path in the future.  By god I want this path available for others to help them move on.

4 Responses to One of those nights…