Anyway, the correct answer to why do you need an AR-15? is because fuck you. Or, the more politically correct version because I can. You see, Piers, you don’t get a say in what I own or what I do. End of story.

[If you’re wondering what he was talking about.  It was this show down between Alan Gottlieb and Piers Morgan.

This is the same Piers Morgan from this recent twitter escapade. 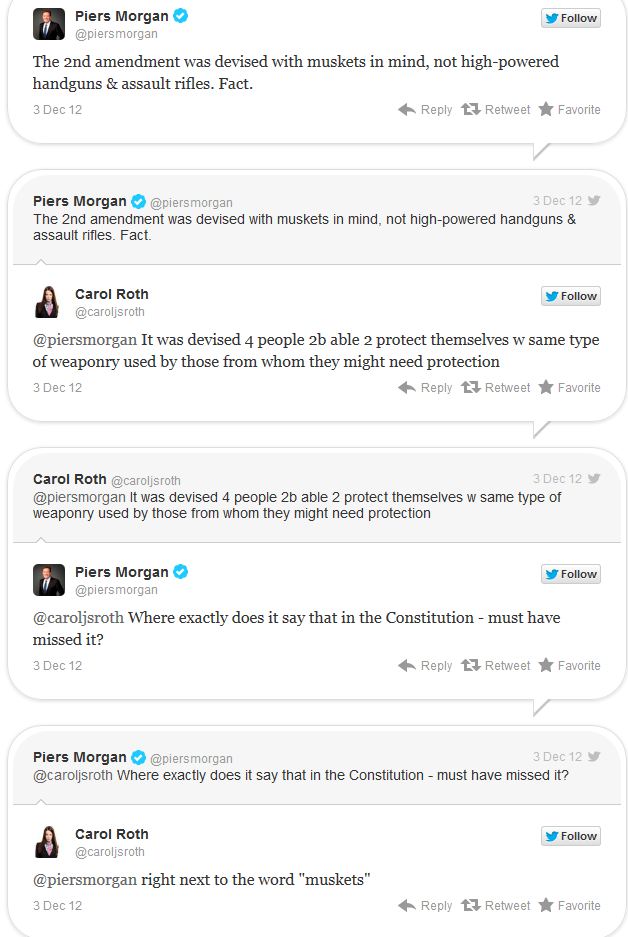 Yeah, that’s the tweet Alan was bringing up when Piers went off the deep end.

Mr. Morgan, I do not have to justify my purchase to you, the government, or any other person.  It is called the “Bill of Rights”, not the “Bill of Needs”.

Tell me Mr. Morgan, why do you feel the need to open your fat mouth and spout drivel that is tantamount to blaming gun owners as a whole for the actions of an individual?  Because despite what you may think, collective rights are B.S. and here’s a nice piece from Oleg Volk to help explain it.  Here’s the abbreviated photo version.

Your claims that some how the youth of America can go out and purchase firearms willy-nilly is false and smacks of someone who has never been through the process.  It is worthy of note that in this latest incident the rifle was actually stolen, not purchased.  You claim that you want to stop the violence but instead focus on the tool and not the person and the act.

The choice of a firearm actually is a blessing despite what many people think.  If given immediate and proper medical attention gun shot wounds have an 80% survival rate, regarding hand guns.  (I highly suggest watching this video as it is a wonderful view into the world of terminal ballistics.  If anyone knows where to find a better copy of it, please let me know.)  Rifles have a different statistic but currently I am unaware of the actual numbers.  The bottom line is you need to hit a vital organ to cause terminal damage.  Rifles while more powerful and capable of more severe tissue damage still suffer from the issue of needing to hit a vital area.

You seem to think that firearms are the only tool available for mass murder, except that is anything but true.  You know what is effective and honestly down right scary Mr. Morgan, fire.  Fire can be set and scheduled so the murderer miles away before anyone knows what happened.  If the Aurora shooter had used fire instead he could have killed every last person in that theater with a guaranteed success rate of 100%.  All he had to do was block the exits with fire first.

You complain about why would anyone need an AR-15.  You argue that there is no need for it.  Yet it is the most popular rifle in America.  Used for hunting, because we all know George Washington crossed the Delaware to get to his duck blind, sport shooting and even law enforcement uses the semi-automatic AR-15.  I use my AR-15 for competitive shooting as well as Boomershoot.

Ultimately though Mr. Morgan, I don’t have to give you any other reason than that of, pardon my language, “Because Fuck You, That’s Why!”  It is none of your business that I even have a firearm and it is not my responsibility to control the actions of others, much less be held responsible for their decisions or actions.  Besides, there’s a reason my feathers ruffle when you and your compatriots start banging on the war drums like you do.

Frankly Mr. Morgan I don’t give a crap what you think either because you’re nothing more than a gun grabbing Brit. Guess you missed the fact that gun crime went up 35% in Britain, that’s not including the overall crime rate.  Since you think that “Gun Deaths” are the only ones that matter.  The fact is that there is no correlation between civilian gun ownership and crime much less causation.  Which country has the positive slope on the trend and which has the negative slope?  Remember now, negative is better.  But as we can see in the video, facts don’t matter to you. -B]