The Minuteman » Unfiled » Another Day Another Classifier

Another Day Another Classifier

So I got up and ran the match this morning.  Again I was first out of the gate out of my squad.

I have discovered that I need a warm up period when shooting.  For you see, this shirt from Rob Allen was quite applicable. 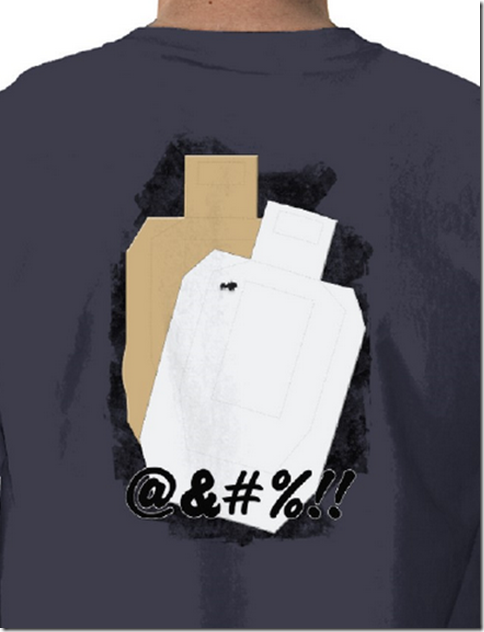 There was one minor difference though for me.  I drilled that no shoot right through the upper A zone.  Seriously, when I did it this is what I heard in my head:

But it wasn’t the classifier so who cares.   Here’s the video though of that stage, (and a side match at the end).

A couple things worth noting… I hate snow fence and ports in snow fence.  You actually see me step right and I start to go through an old port and realize I’m not in the right spot.  Thankfully I caught that I hadn’t shot two targets and salvaged that.  I also had a mag failure just before engaging those two targets.  That move up in my mag change adjusted my mental plan.  I have tossed that mag to the side, it has some issues to be worked out.

We actually had a discussion regarding ports in my stage design class yesterday.  I have to say after today’s match, unless it be in a wooden board, I don’t want them in a stage.  Put an entire vertical hole, who cares at what level you shoot.  If you really want to induce kneeling or something use a shooting barrel.

I move on to the next stage and rock it like a boss.   What does my videographer do?  She decides to sit this one out.  No mikes, no no-shoots, rocked the Texas Star.  Overall I was quite happy and pleased with that stage.  At this point my wife actually started keeping score so no more video.  I really need a go pro.

There was a speed shoot, rocked that as well.  Not quite as fast as I would have liked but again, didn’t clip any no shoots.  Moved on to the qualifier.  We were all joking that someone was going to end up tapping two rounds into the target in succession.  This would be a problem as it is a Virginia count.  Extra shots, and extra hits are bad.

Guess what I did.  Right out of the gate my brain reverted to react.  It saw, paper target, two shots.  I cleared the rest of the classifier fine except, I never threw a shot so now comes the next penalty.  I had an extra hit since I drilled them all in the A.  Oops.  Well I wasn’t the only that biffed the classifier, and by no means the worst, but I did reshoot it.  I don’t want to be a total flunky here.

Went and shot the other two stages.  Both of which were uneventful.  Again didn’t tag any no shoots.  Evidently I just needed to exercise those demons* from my system.

Overall other than the first stage, this was a pretty good shoot for me.  I do need to slow down a bit more, but there are times I swear I’m standing still and I watch on video and it’s, holy crap I just flew through that.

*You know you’re a computer geek if when you first wrote that you typed daemon.  If you get that joke, you’re in the same boat too.

2 Responses to Another Day Another Classifier